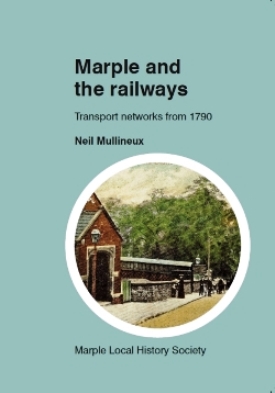 An overview of the way different transport networks have served Marple and Mellor since the first industries in the area. First the turnpikes, then the canal with early tramways and then the railways proper.

Chapter 1 - Pre railway networks
The coming of the turnpikes and then the Peak Forest Canal.
Chapter 2 - Early tramways
The Peak Forest tramway, the temporary Marple tramway and the Cromford and High Peak Railway.
Chapter 3 - The coming of the railway 1830-1865
The skulduggery and shenanigans that went on before a railway eventually arrived in Marple.
Chapter 4 - The growth of the railway 1865-1900
How Marple went from a small suburban station to a major mainline junction with 250 trains each day, over 100 stopping.
Chapter 5 - Decline and renewal 1900-2015
And back to being a small suburban station.
Chapter 6 - Influence on Marple and Mellor
The houses that were built and the houses that were not built. And the pubs. The recreational attractions for the mills of Manchester and the literary associations.