The Wright and Hudson families and their role in the development of Marple 1750 - 1970. 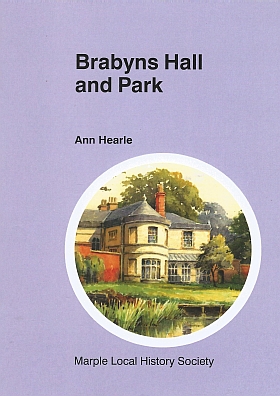 Marple today is a small town at the south-eastern corner of the Manchester conurbation, and is now mostly a dormitory suburb with the Dark Peak of the Pennines as a backdrop. It has a population of over twenty thousand, living in several centres and scattered hamlets. The district is hilly, covering an area of slightly more than eleven square miles and rising from around three hundred feet (90 metres) at the lowest point on the River Goyt to just over one thousand feet (300 metres) on Cobden Edge,

Brabyns Park, lies beside the River Goyt, on the opposite bank to the village of Marple Bridge, today as one of the largest country parks in the area. It is a place for walking riding and sports. How many of the visitors wonder why it is a public park. Who owned it before it became council property? What is known of its history? Where did the name come from?

Marple is part of Stockport, one of the ten Metropolitan Borough Councils within the County of Greater Manchester. Until the Industrial Revolution it was a collection of small farms and hamlets on the western edge of the Pennines, There was only one family which could be described as minor gentry, the Bradshaws of Marple Hall. In the 1780s Samuel Oldknow came to the district and built at that time the largest mill in the world, in the neighbouring township of Mellor beside the River Goyt. He changed the face of both Marple and Mellon constructing new roads, promoting the Peak Forest Canal erecting limekilns workers' housing and modernized farms. Other mills followed in the last decade of the 18th century and the first half of the 19th century, Marple during 19th century was full of mill hands miners, farmers and farmworkers. Then after the arrival of the railway in 1862, villas large and small started to be built on the farm land for the new commuters. The arrival of the railway also brought day visitors by the thousands on works outings Sunday School treats and visits to the countryside, away from the dirt and grime of Manchester. They came to walk in the hills and for recreational visits to the Roman Lakes. They nearly all passed by the entrances to Brabyns Hall and the high wall enclosing the estate on their way down Brabyns Brow from the station.

We no longer have thousands of visitors each Sunday but the park is as popular as ever. What used to be the service entrance to the estate is now the main entrance and the forbidding perimeter wall is no more.

The park now attracts early dog walkers and joggers, footballers and lacrosse players for the many pitches and young people wanting to try out the challenging mountain bike course. Once a year there is the bonfire and firework celebration and it was the traditional site for the funfair. Uses have changed over the years but it still plays a central role in the community.