From Fields to Flower Beds - the growth of Marple

From Fields to Flower Beds - the growth of Marple

From Fields to Flowerbeds - The growth of Marple 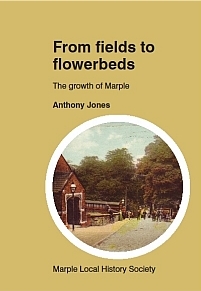 From fields to flower beds

The growth of Marple

The words ‘By an Indenture...made this day' are found at the beginning of many deeds. It is the contents of these deeds that tell the story of housing development in Marple, and the people involved in that development.

A dictionary definition of ‘Indenture’ is:

1. Any deed, contract, or sealed agreement between two or more parties.

2. A deed drawn up in duplicate, each part having correspondingly indented edges for identification and security.

By looking at these deeds we can often trace the history of each plot of land – who owned it, how it was used and when it was built upon. Together they tell us much about Marple, how it was then and what happened for it to develop the way it has. To try and document the development chronologically would result in a story that would be hard to keep track of as it jumped from place to place and person to person.

It was decided to look at the development of each area, and the people who had a large influence on that development. Marple, as it is today, is a very different place from how it was 400 years ago. A traveller from Stockport would have to make his way along a road that was little more than a muddy track full of potholes. He would arrive at a small hamlet called Norbury Smithy, consisting of an inn called ‘The Jolly Sailor’ and a few houses. From there the traveller had two choices, right up Church Lane to the Ridge and Hawk Green, or left along Back Lane to Marple Bridge. To the north of this track there was Marple Hall, a number of farms – Dan Bank, The Dale, Marsland Fold, Bowden, Manor, and Ley Hey – lots of fields, and Brabyns Hall.