A new history of the two townships from earliest times to the present. The emphasis throughout is change – the changes that have happened in every aspect of life. There has been enormous change but in many ways life in Marple has come full circle. 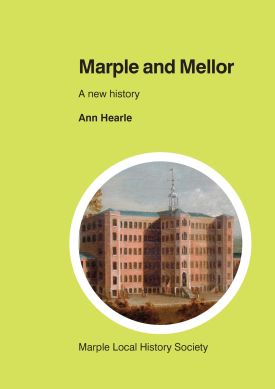 The hill spur on which Mellor Church stands gave this area strategic importance from hunter-gatherers until medieval times. This, together with its location on important boundaries, compensated for the poor agricultural base. The prehistory millennia changed England from roving bands to a settled people with organised societies. Even in the sparsely occupied northwest of England the population traded and moved over vast areas.

After a thousand years of generally peaceful development and little involvement in the events of the country, Marple and Mellor were suddenly very involved in the epic struggle between King and Parliament.

Marple and Mellor had been agricultural communities from prehistoric times but after the Civil War the communities began to develop other skills, taking advantage of the region’s resources. Mellor was at the forefront of the early Industrial Revolution and Marple demonstrated later changes. As time went on, the mills were succeeded by other commercial ventures and the communities adapted to a post industrial society.

Religion has played an important role in the lives of local people. At first it was all-enveloping and imposed from above but this area was in the forefront of the blossoming of different religious beliefs. Nonconformists of all types coexisted alongside Anglicans but, as time went on, other interests competed with religion. People had more free time and money to spend on secular activities.

Marple and Mellor are both hllly and rural but despite this they were in the vanguard of the transport revolution, seeing canals and railways as well as improved roads. As the population grew and the societies became more organised other utilities were gradually introduced – gas, water and sewage, electricity and telephones.

As the communities grew and developed they introduced local government to control and manage the changes needed for a successful society. At the same time education was made available for all and public health became a local responsibility.

From 1974 central government changes throughout the country altered county and local administration boundaries. Marple and Mellor were not exempt from this turmoil yet, despite the changes, there survives a strong local identity. There have been many changes in every aspect of life but a strong thread of continuity still remains.