Marple Cattle Market: a scene during the judging at Marple Smithfield, Christmas 1934.

In the last three hundred years Marple has changed from a rural community to an industrial neighbourhood and now to a post-industrial commuter area. However, although gradual, these changes have not been mutually exclusive - there were early signs of industry well before Samuel Oldknow chose Mellor as the site of his new mill and even today, the Romiley Young Farmers Show demonstrates that the agricultural tradition lives on. Even so, it is difficult to believe that Marple had a regular weekly cattle market as recently as 1968.

It was not always so. Until the coming of the railway in 1865 the agricultural industry of Marple and Mellor was essentially local. The farms were small, diverse and catered for the needs of the immediate community. Many, if not most, farmers had another source of income, quite often hand loom weaving or associated trades working with textiles. 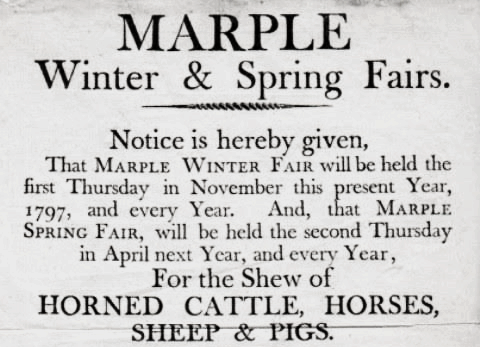 This is not to say that they kept themselves to themselves. Like farmers everywhere they would meet on occasion to conduct business and socialise. There were regular twice-yearly fairs in the eighteenth century and Compstall still has a relic of the time when it was a sheep market. Sheep were held in the various folds - Barlow, Greave, Ratcliffe, Beacon and Lower Fold and the farmers would meet in the market place. The touch stone where deals were made can still be seen. The deal having been agreed, the parties would spit on their hands, and hit the stone, sealing the deal.

The railway brought in major changes very quickly. Today we think of railways largely as passenger trains plus bulk carriers of minerals such as coal or limestone. In the second half of the nineteenth century however, they played a much wider role. Before the development of the internal combustion engine, railways were the general carriers of their day. There were fixed rates for the carriage of every conceivable commodity, one of which being livestock.

Marple had a relatively small goods yard which covered the area taken up by the present day car park. This space had to provide for the temporary storage of general merchandise and of coal as well as the movement of cattle and sheep both inbound and outbound. It was particularly difficult to deal with livestock at Marple station as the lack of space precluded permanent pens. On Sunday, when the cattle began to arrive, temporary pens were erected by inserting wooden posts into permanent sockets in the yard, then roping between them. To get the cattle and sheep out of the wagons which were in the siding or ‘shed road’, a portable wheeled ramp was used. This was an awkward and inefficient solution for livestock handling from the start and, as volumes built up, it became urgent to find an alternative solution. 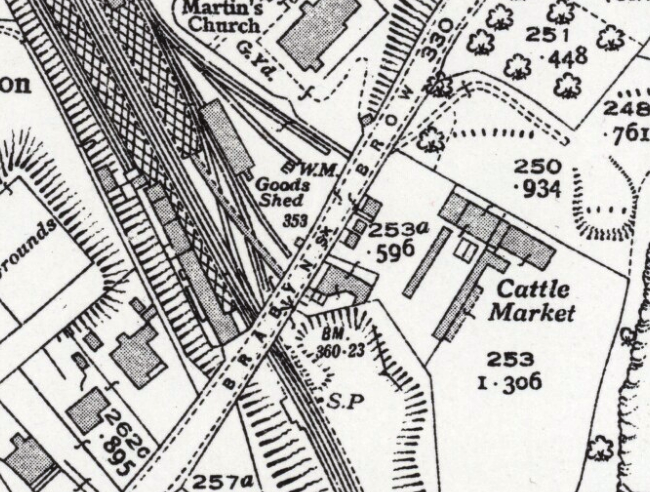 The solution was found on the other side of Brabyns Brow. The railway owned the land as the lower part of it was used for a turntable. On the higher part a wooden hut had been erected as a shelter for the cab drivers waiting for trains but the land around was unused. London had had a meat market at Smithfield since the twelfth century and the name has become eponymous for meat markets elsewhere. In 1909 Marple became the latest iteration of that well known name - Marple Smithfield.

The market opened on Monday 1st March 1909 and at first it was organised by a local Marple farmers’ co-operative although they had a professional auctioneer - Mr Charles Pickford. At the first meeting 40 cattle and four horses were offered for sale. Apparently bidding was brisk and some good prices were realised. (But they would say that, wouldn’t they.) The site was also used on other days by Mr Pickford to auction equipment and stock from individual farms closing down or retiring. Over time the market became too much to organise on a part-time basis and after the First World War Brady & Son, the Stockport auctioneers, took control. They already ran a cattle market in Stockport and another farmers’ co-operative in Chinley. The market was purchased by Harold Tommis, a partner in Brady & Son and he made an arrangement with the firm to manage it. The organisation was strict - it had to be because they were dealing with live animals. Grading took place from 10.30 and the entry closing time was 11.45. Sales began after lunch, usually from about 1.30. 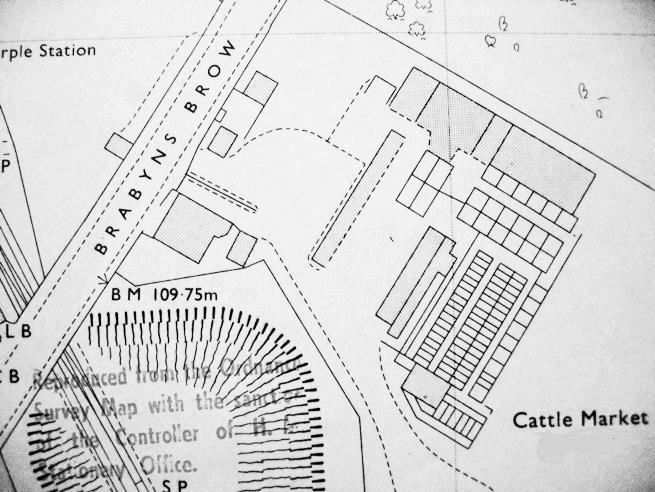 The market buildings and structures were quite rudimentary, mainly of timber and corrugated iron construction. There was a main range along the eastern side which included a shippon, a sale ring and a calf section. Stretching out towards the railway in a horseshoe arrangement were cattle pens and accommodation for poultry cages. There was a wooden and a brick office on the same site as the present restaurant. This site has had a varied history. Originally built as a shelter for the cab drivers waiting at the station, it has served as a café, a goods office, a coal merchant and an estate office as well as a base for the auctioneers. It even survived the indignity of a tree falling on it during a storm in February 1929. The tree cut the building in two and damaged a car but fortunately no one was injured.

There are many memories of the impact the market had on the local community. There was a lot of cattle movements through Marple and Mellor on market days. Indeed, at one stage, the railway company considered constructing a siding on the south side of Brabyns Brow to obviate the necessity of blocking the road with herds of cattle. Margaret Davenport (neé Close), remembers Bob Tetsill, a farmer, driving his sheep and cattle down Brabyns Brow, to the auction.  His farm was on land behind Station Road, near the junction with Hollins Lane. Similarly, Edmund Wilkinson recalls that every Monday cows were driven up Stockport Road from the direction of Offerton to the cattle market and one had to keep house gates shut otherwise you would have cows in the garden.  Stockport Road at that time had stone setts on the north side and. Brabyns Brow was entirely surfaced with setts.

Some of the boys took a more active role, helping the farmers directly. Bob Watson of Tan Pits Cottage, Longhurst Lane, remembers how he drove cattle for local farmers down the lane, along Town Street and up Brabyns Brow to the market. Colin Stegeman helped on a milk round at weekends and during the holidays. If there was a calf tp be delivered to the market they completed the round as 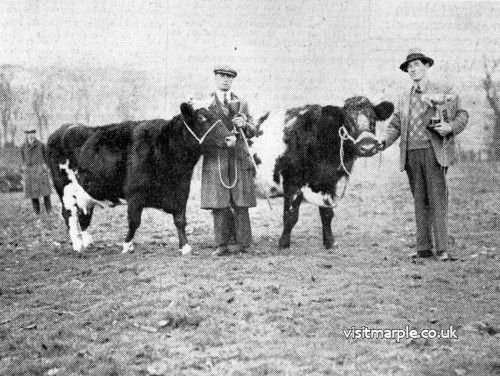 quickly as possible, returned to Wood Farm in Cross Lane and took out the churns and cans. They then changed the horse, Dolly, for a younger and faster one called Bonny. The calf was placed in the milk float and they sped off to the auction at full gallop. An exhilerating experience, particularly when they were allowed to drive.

One aspect of the market that most people recall was that on market days some of the pubs applied for all-day licences. However, this might not have been quite the festive occasion that it appeared. Several neighbouring markets were also held on Mondays so the auctioneers decided to change market day to Tuesday. They suggested to both the Norfolk Arms and the Midland that they should apply for all-day licences for the new day. The Norfolk Arms went ahead but the landlady of the Midland declined as she decided that it wasn’t worth her while. So much for the legend of hard drinking Marple farmers.

A few locals were employed directly by the market. George Watson lived at Hilltop Farm, Ridge Road until he sold and retired in the late 1950s. He then worked for Brady's the auctioneers, at the cattle market, and this kept him in touch with the farming community.  Part of his job was to examine cows’ ears because the ears were pierced after subsidies were paid and it was not unknown for some unscrupulous people to fill in the holes. The Ministry of Agriculture became increasing involved with markets as they were licensed and could be authorised to carry out a number of functions on behalf of the government. This was particularly the case during the war and afterwards whilst rationing was in place.

The market served more than its immediate area. For many years in the 1930s a dealer from Dumfries would bring Shorthorn and 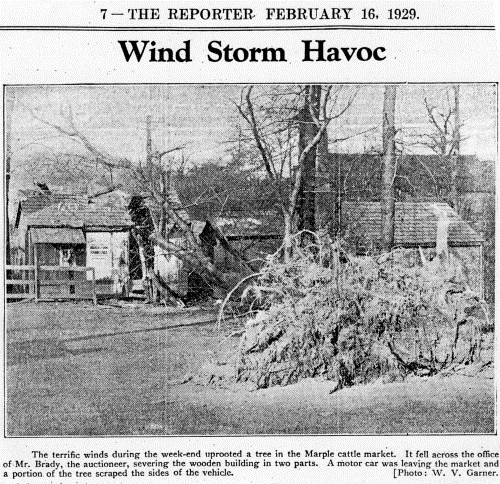 Ayrshire cattle to sell to local dairy farmers and smallholders. In turn, those same farmers would bring barren cattle to be sold for slaughter. The list of winners at the Christmas Prize Show gives an indication of the area served. The majority came from Marple, Mellor and New Mills but there were also several winners from Ashton and Dukinfield, Bredbury, Reddish and Glossop. As well as heifers and bullocks, there were also markets for calves, pigs, turkeys, geese and ducks. But no sheep; they came later. Some of the cattle were sold to local butchers as it was still common for some butchers to buy live animals and slaughter them on the premises.

This practice gradually died out in the first half of the twentieth century but right up to the Second World War some of the local butchers were slaughtering cattle they had bought at the local market. Although White’s in Market Street was only established in 1976 the premises had been used as a butchers for at least 160 years. Edith Atkinson (neé Pearce) remembered cattle being walked from the auction and driven down the ginnel to the back of the shop where it would be killed and butchered. They often sensed what was in store for them and would bellow loudly.

The market eventually closed on 27th August 1968. The professed reason was the difficulty of getting qualified staff to look after it but the farming industry had been changing for some time. As the district moved over to dairy farming the turnover of beef cattle had declined. Farmers now had their own transport and they were prepared to venture further afield in order to buy replacement stock. Local butchers were no longer buying meat on the hoof and slaughtering it themselves whilst the wholesale slaughterers were concentrating on larger markets and bypassing small local markets such as Marple Smithfield. To compensate for this loss of business Marple had developed the sale of sheep but this could not compensate for the decline in beef cattle. It was a much more seasonal business, peaking during August and September as the spring lambs came to 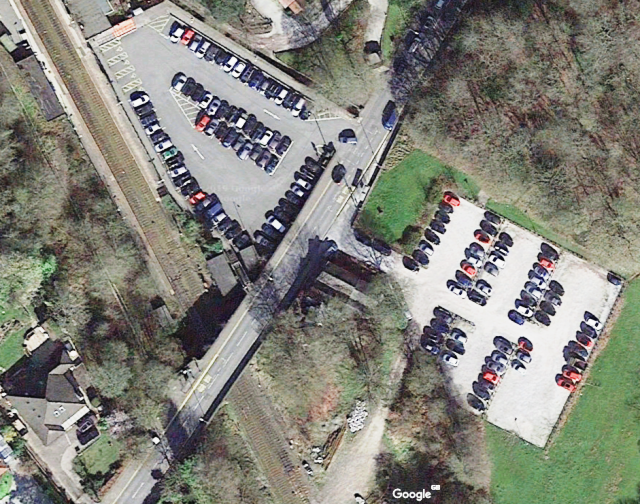 maturity and there was only a low turnover for the rest of the year. The demise of the market was sad but inevitable. The Cheshire farmers tended to go to Chelford market whilst those from the Derbyshire side moved their patronage to Bakewell and Hope. The wall on Brabyns Brow was reduced in height and the site became an extension car park for the station; somewhat rough and ready at first but gradually improved over the years. The multi-purpose timber building became first Midler’s restaurant and is now the Purple Pakora. The partnership at Brady & Son was also dissolved once the market closed.

Below: The Cattle Market Buildings etc., are shown in this 1967 aerial view (David Burridge) 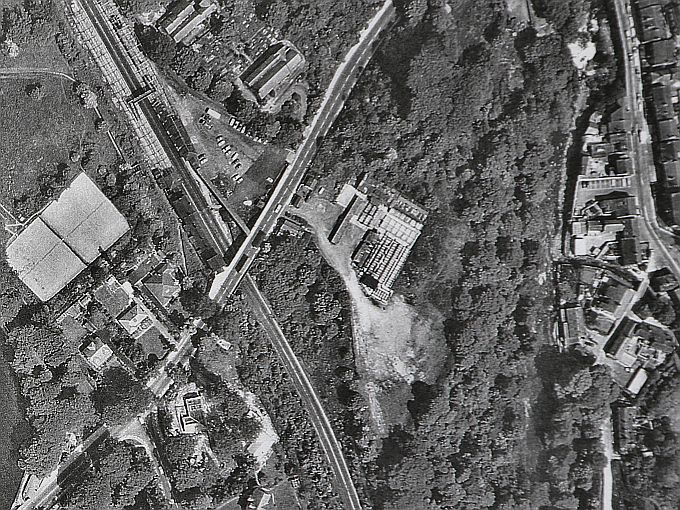