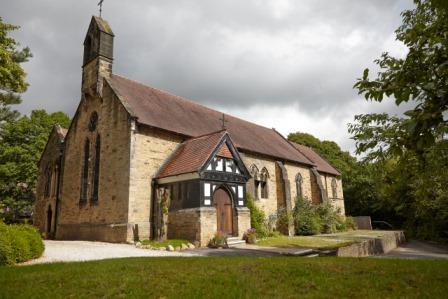 Have you found Marple’s Hidden Gem yet? Maybe you have walked past it, or by it many times without realising it

The gem is St. Martin’s Church, Low Marple on Brabyns Brow, next to Marple Station. This church, quite modest from the outside has many wonderful windows and artefacts designed and made by eminent artists and architects.

In 1866 Ann Hudson inherited Brabyns Hall. She decided to have a church built nearby and chose an upcoming young architect, John Dando Sedding to draw up plans in the Gothic style. Sedding commissioned the William Morris firm – a group of artists in the Arts and Crafts Movement – including Gabriel Dante Rossetti, Edward Burne-Jones and Ford Madox Brown, to design stained glass windows. St. Martin’s was founded in 1867. 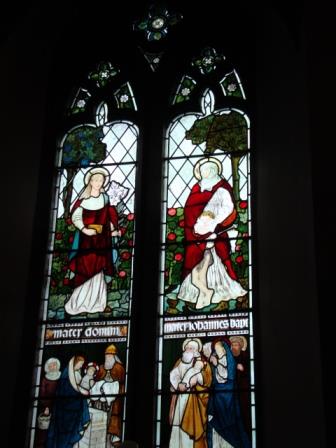 Ann’s daughter, Maria Ann commissioned the Lady Chapel, choosing Henry Wilson to design it and Christopher Whall to paint “Our Lady of the Goyt Valley.” With passing years styles had changed and the Art Nouveau influence is seen in the Lady Chapel.

The Christopher Chapel houses a huge statue of St. Christopher – so large that the outside wall had to be built out three feet to accommodate it. The chapel was built in 1909 in memory of Maria Ann Hudson who died in 1906.

Last year a Heritage Trust, which had been set up, received Charity status. The Trust invites supporters to join up as Friends – anyone in Marple and Marple Bridge interested in art and architecture is welcome to join.

It is the Trustees’ plan to provide events during the year – talks and visits – and to raise funds for the conservation of our wonderful treasures.

Open mornings start on Saturday 2nd April from 10.30 to 12.30 when stewards will be available with information about the church.

In September the church will take part in the Heritage Weekend, with a concert on the Friday evening, September 9th with exhibitions and music on Saturday and Sunday.

For more information about the Trust see its website www.stmartinsheritagetrust.org.uk