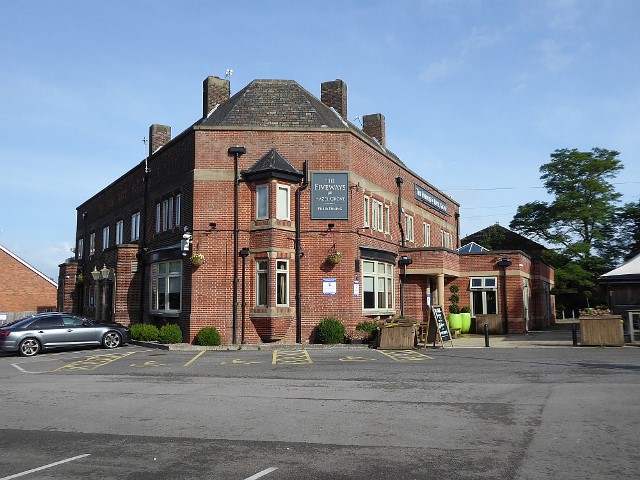 Norbury, Hazel Grove
The ‘mystery picture’ in the MLHS August newsletter was an aerial view of the Fiveways Pub (above) on the corner of the A523 Macclesfield Road and Dean Lane in the Norbury area of Hazel Grove. The pub was built in the late 1930s, the architectural style reflects the period. However, Norbury goes back much further. From Medieval times scattered groups of settlers survived by subsistence farming. People would have been travelling through the area from Roman Times as the Roman road from London to Carlisle, forms part of the A6. It is easy to imagine businesses setting up along the way to attend to the needs of travellers; inns, blacksmiths and a variety of shops. 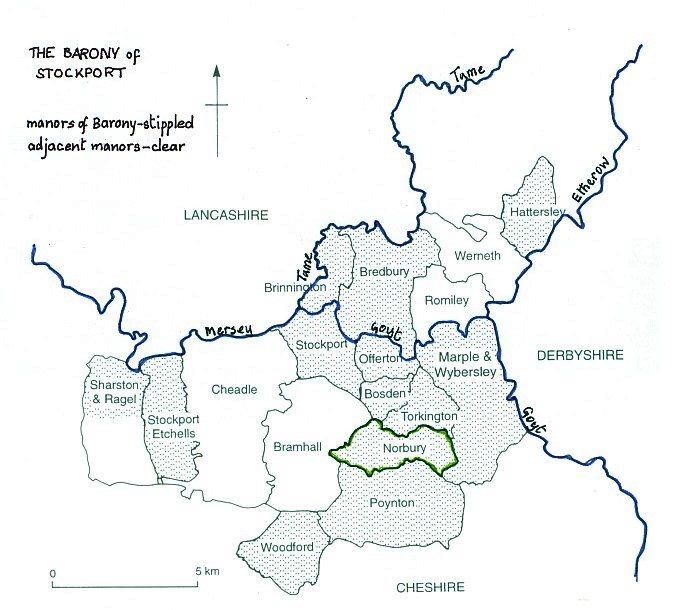 By the time the Normans arrived in England in the 11th Century the country had already been divided administratively into the precursor of our counties. The Normans kept the counties as their basic land ‘parcels’ with a nobleman in charge of each. Hugh Lupus, known as ‘the Wolf’ or ‘the Fat’ and brother-in-law of William the Conqueror, was appointed as Earl of Chester. Cheshire was divided into 9 baronies, each under control of a more junior nobleman, a Baron. The baronies consisted of lease holdings known as ‘manors’, run as farming estates with a variety of tenants, ranging from serfs (virtual slaves) through villeins (tenant farmers) to freemen. ‘Tortynton’ and ‘Nordberie’ were two of the 13 manors under the jurisdiction of the Barony of Stockport. Nordberie means northern fortified place. As it is at the southern end of the Barony of Stockport, what can this name mean? Well, apart from its place in the Barony, it was in Macclesfield Forest, much valued by Norman nobility for its hunting potential. Might Nordberie possibly have been ‘the house guarding the northern boundary of the forest’? Modern Hazel Grove comprises of three full manors: Norbury, Torkington and Bosden, with parts of two others, Bramhall and Offerton.

Norbury was first leased to a family who took the Norman Frenchified name of ‘de Nordberie’. They held it until 1220 when a Robert de Hyde married the daughter of Thomas de Nordberie, and so gained the estate. The de Hydes held Norbury until 1670 but financial difficulties forced them to sell the holding to the Leghs of Lyme for £2000. From then the Leghs have been a force in Norbury, up to the present day. They still collected ground rent from properties in the Norbury area until recently. Evidence of their property ownership can be seen on the door of a cottage at the junction of Chester Road with Dean Lane/Jacksons Lane where the house sign states that it is part of the Lyme Estate. 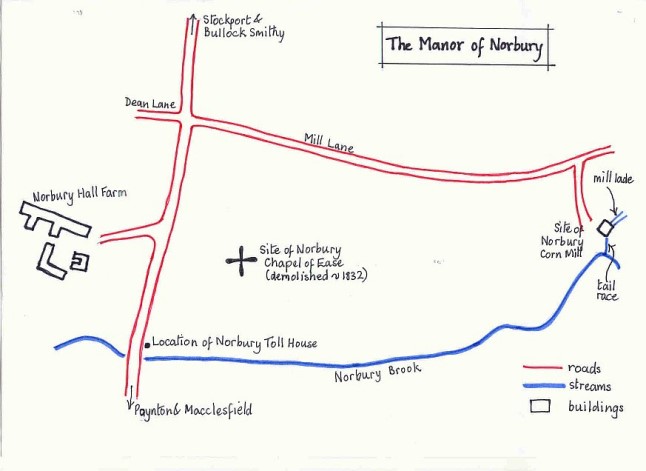 Norbury had a manor house, a corn mill and a chapel of ease. The manor house faced Dean Lane. Originally it would have been a small timber-framed dwelling, but it was rebuilt by the Hydes in 1560, replaced in 1851 by the present brick and stone Norbury Hall farm house. Described as a farm of 222 acres with a staff of seven, owned by Thomas Legh of Lyme and farmed by George Woodruffe.  view Norbury Hall farm house

Norbury Corn Mill was probably built by the Hydes. It was located off Mill Lane which was the medieval route from High Lane to Bramhall. Today the first part remains as Mill Lane, becoming Dean Lane after crossing the A523, changing to Jacksons Lane at the junction with Chester Road. In manorial times all tenants were required to grind their corn at the mill, the lord being entitled to 1/16th of the value of the ground corn, so it was a useful source of income. The mill was powered by a 30’ diameter waterwheel, turning five pairs of mill stones and using water from the Norbury Brook brought in a 145 yard long leat to a reservoir above the wheel. view Sketch of Norbury Corn Mill by Phil Alexander.

In the mid-19th Century a steam engine was installed to increase power, making use of the ready supply of coal from the nearby Norbury Hollow coal mine. The mill had stopped working by 1900. The remains of the wheel pit were excavated in 1991 (below) in preparation for an early version of the Hazel Grove by-pass. For several years the features were visible before being eventually obscured by undergrowth. All traces have been obliterated by the works for the new A555 Airport Relief Road which opened in autumn 2018. 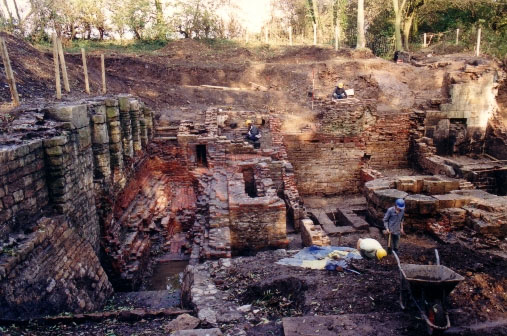 In early times people were expected to attend weekly worship. As parishes were very large with a scattered population, this could mean a lengthy walk to the mother church. Going to church took away valuable time from essential agricultural work, and there may have been other reasons why people didn’t want to go all the way to the parish church, in this case St Marys in Stockport Market Place. It is on record that members of the Hyde family were set on by a gang of outlaws led by Thomas Bradley whilst on their way from Norbury to St Marys one Sunday in July 1425 and kept in captivity! It was useful to have a ‘chapel of ease’ nearby for Sunday 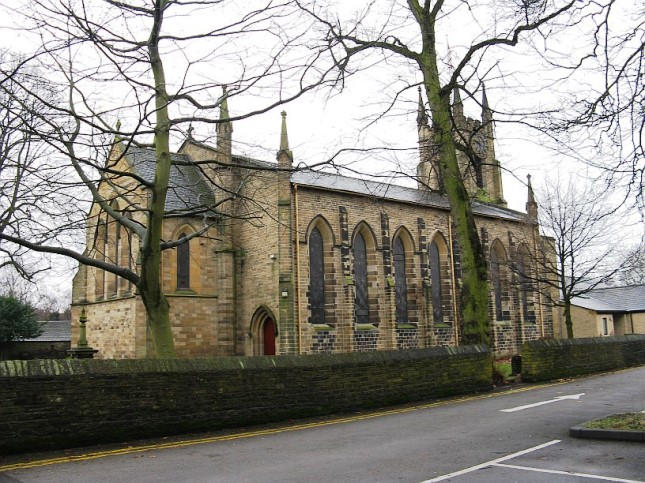 worship. The one at Norbury stood on the opposite side of Norbury Brook from Brookside Garden Centre, in an area still called Chapel Fields on some maps. A chapel of ease was a lowly part of a parish, served at best by a curate, but Norbury had to share its curate with Poynton chapel. This arrangement required some cooperation. Norbury was in the parish of Stockport, while Poynton was in the parish of Prestbury and both parishes had to agree to the arrangement. Norbury Chapel was a timber framed building, in use until the 1830s. By then it was riddled with dry rot and was too small for the population. It was replaced by St Thomas Norbury, now effectively the parish church for Hazel Grove, though still in Norbury, as its name tells us. The building of this church was a wonderful example of local enterprise. The Leghs of Lyme donated the acre of land needed, the foundation materials were recycled from the chapel, the stone for the walls came from the Legh’s quarry on Carr Brow High Lane, and local farmers transported everything free of charge. The bell tower was paid for by local donations, and the bells were cast-offs from St Marys, Disley, followed by their (already second hand) organ in 1837.

Until the mid 18th Century, the road network in Hazel Grove was very different from today. While the A6 followed more or less its present route, the Woodford road led off along Chester Road, crossing the Dean Lane/Jacksons Lane junction to become Woodford Road Poynton and eventually to meet the road to Wilmslow. A branch led through Mill Hill Hollow to Poynton Lane Ends near 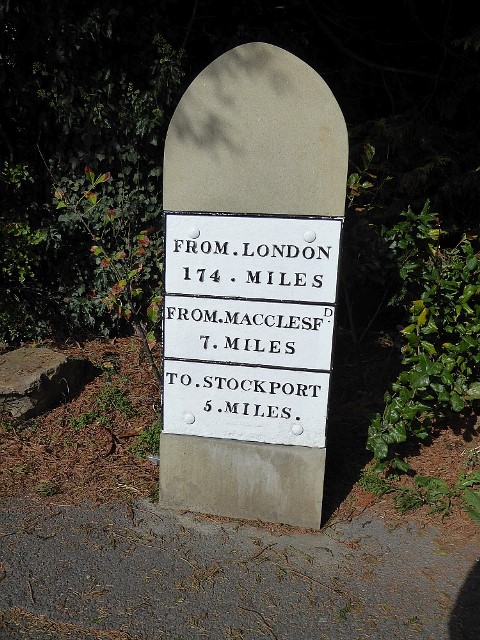 the main entrance to Poynton Park. Here was the original village of Poynton. In 1767 a turnpike road was proposed to give a completely new route to the Midlands and south, the main incentive being to improve and speed up the journey to London. It branched off the A6 at the Rising Sun pub and proceeded south through Poynton, Adlington and Macclesfield. Burdett’s 1777 map of Cheshire The first toll booth was beside the Norbury Brook at the boundary of the township of Norbury. When the new road opened the old Poynton road became just a by-way and the centre of Poynton shifted a little along the road to the present location at the road junction of A523 with Park Lane and the A5149 Wilmslow Road, clearly marked by the impressive St George’s Church of 1858. Evidence of the turnpike road remains with the retention of some of the original milestones, of which the one in Poynton has recently been beautifully restored.

From the 19th century the Industrial Revolution brought more industry into the area and with it a growing population. Housing increased, at first along the main roads, then spreading gradually into the countryside behind. Two railway lines came through Hazel Grove from Manchester, one going towards Buxton and the other to Macclesfield. To these were added the tram route along the A6 towards Stockport and Manchester, providing good cheap public transport to local towns and the possibility of living in countrified surroundings with quick access to town. It is easy to picture the way suburban housing grew between the First and Second World Wars if you take a walk in the area between Chester Road and Macclesfield Road and look at the style of housing.

So, back to the Five Ways, and the obvious question of how it got its name? Well, it is at the crossroads of the roads to Hazel Grove, Macclesfield, Norbury corn mill and Bramhall, giving Four Ways, with the Fifth Way straight into the pub! view Five Ways direction post