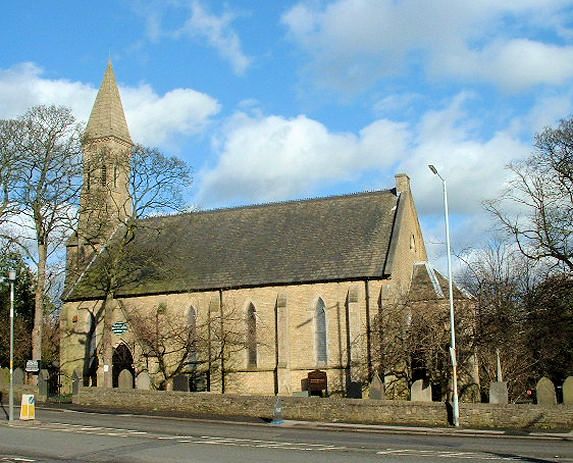 Just beyond Chadkirk the A627 climbs the long steep hill towards Bredbury and passes through Hatherlow, described by James Butterworth in his 1827 book History and Description of the Towns and Parishes of Stockport as ‘a small hamlet within the Parish of Bredbury’. It may be small but its mix of both old and elegant buildings gives it an aesthetic coherence to justify being designated as a conservation area by Stockport MBC.

Hatherlow, which is Old English for heather hill, starts at the United Reformed church and ends at the junctions with Gorsey Brow and Bredbury Green. This part of the A627 is approximately 300 metres long and forms the spine of the hamlet, which straddles either side of the road. Originally, in open countryside, it is now surrounded by new build properties, but its proximity to Chadkirk Country Park means that it retains a rural quality. Hatherlow’s footprint may not cover a large area but it contains a number of interesting buildings. 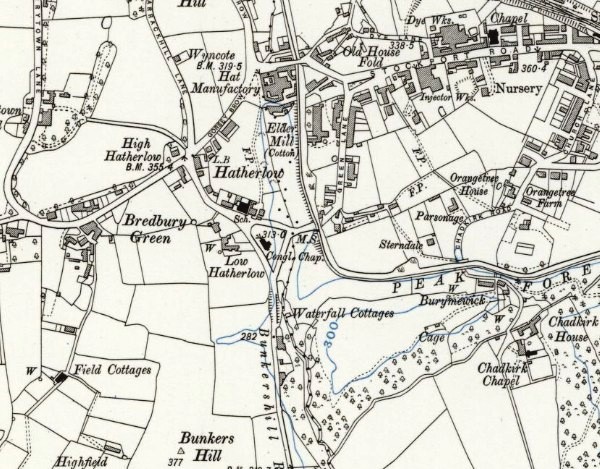 In the late 17th and early 18th centuries, non-conformists had a strong presence in the Stockport area. In 1689, following the Toleration Act, Chadkirk Chapel was registered as a dissenters meeting place. However, in 1705 the Chadkirk estate changed hands and the minister, Gamaliel Jones, and his congregation were informed that the building was no longer available for their use. Another account says that they were evicted! Their response was to buy land in Hatherlow and build a stone chapel, largely financed by Gamaliel Jones. The chapel opened in 1706. Thomas Coward (whose father was minister in the 1840s) described it as ‘ a handsome and spacious place of worship panelled in oak and fitted with a fine pulpit, communion table and chained bible’. It was 60ft long and almost 30ft wide, with a bell-cote – a small wooden framework and shelter for one or more bells. Whilst it was being built, services were conducted in a house in an adjoining fold which tradition says was called Holy House, resulting in the cluster of houses named Hole House Fold. An internal gallery and a belfry were added in 1792 and in 1814 a sundial inscribed with the motto ‘be always prepared’.

By the 1840s the congregation had grown and a new chapel was needed. Local cotton mill owner, Ormerod Heyworth of Oakwood Hall, Romiley, laid the foundation stone for the new church, which opened on June 19th 1846. It cost £2500 to build and Heyworth was the chief contributor, the congregation having raised £520. 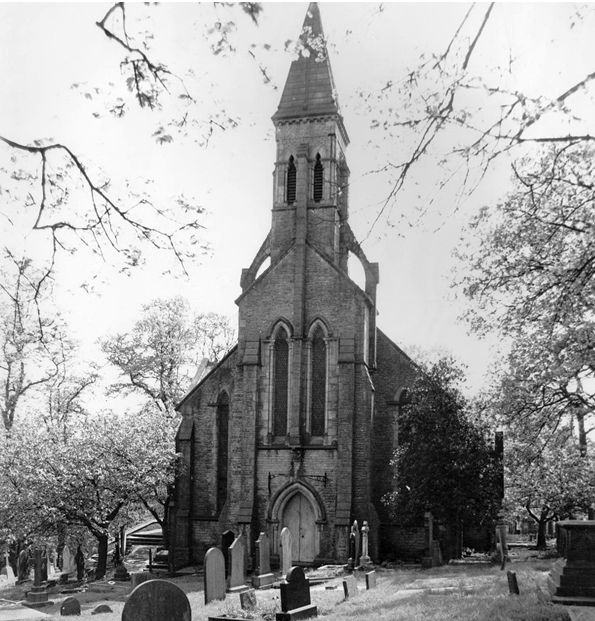 The Grade II listed Congregational church in the Neo-Gothic style, has an unusual irregular shape with a North transept off the nave and a tower placed centrally at the west end. The burial ground, which surrounds it, dates back to 1793. The Neo-Gothic style is reinforced with weathered buttresses, hammer beam trusses and lancet windows with stained glass.

The old chapel was repurposed as a Sunday school and in 1862 a large extension was built which included several classrooms. In 1911 this building was demolished and a new Sunday school built. The 1792 belfry and 1814 sundial were incorporated in the new building. 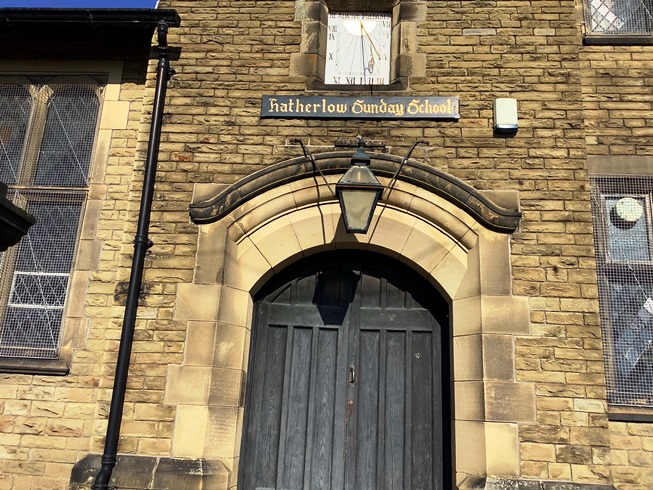 Main entrance to the Sunday school building. Note the sundial over the door

The church has always been the centre of cultural activity in the district and housed the Bredbury Amicable Subscription Library founded in 1822 and later, the Hatherlow Botanical Society. 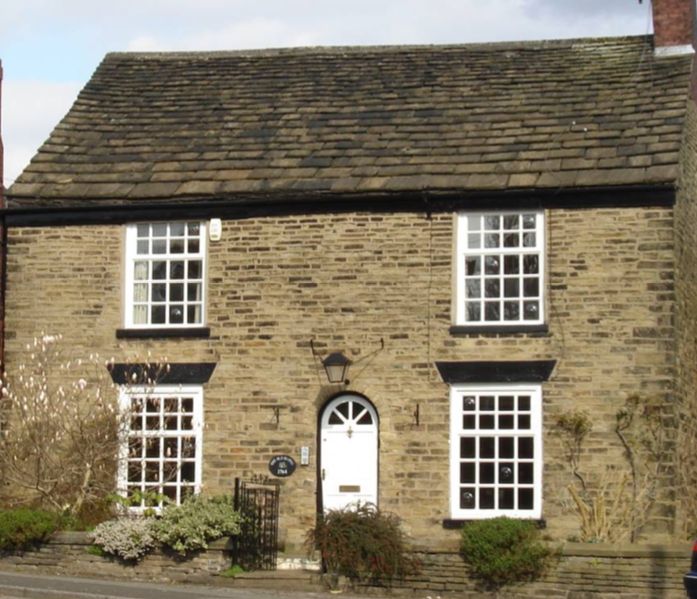 To the left of the Sunday school is the former vicarage. The Manse dates from 1764 and has a symmetrical façade with a round-headed central doorway and large vertical widows which are emphasised by stone dressings and painted sills and wedge shaped lintels. A low stone boundary wall encloses the small front garden plot. It has been a private home for many years. 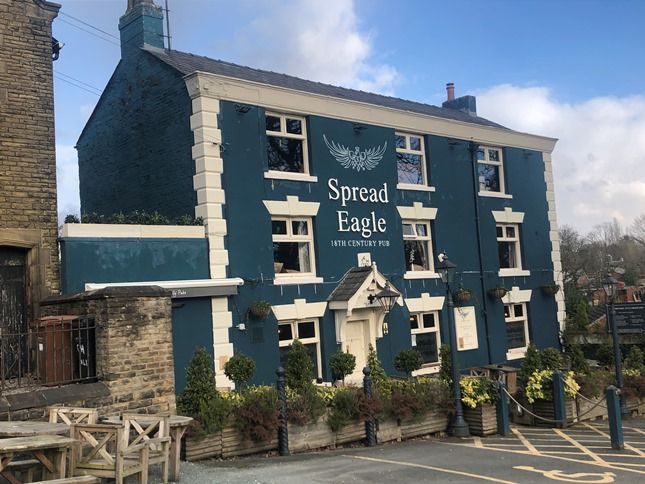 Immediately below the Sunday school is the Spread Eagle pub, an 18th century building built of brick and rendered at the front. Originally called the Spread Eagle Inn, It has a date stone TCH 1722 and was a beer house. It was bought by the brewery, John Henry Lees & Co in 1907 and in 1918 by J G Swales & Co, who were taken over by Boddington’s brewery in 1970. It is now part of the Almond pub group.

In 1837 a bear-bait was held at Hatherlow, although animal baiting had been forbidden in Stockport Township since 1826. According to the Stockport Advertiser bull baiting and cock fighting took place in a field behind the inn. Perhaps this was where bear baiting also took place. 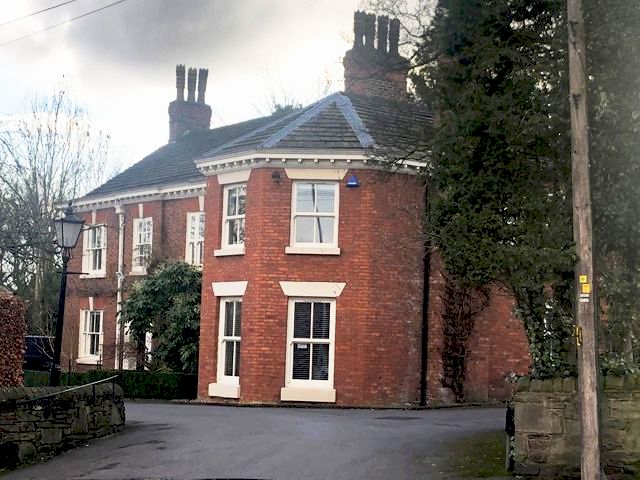 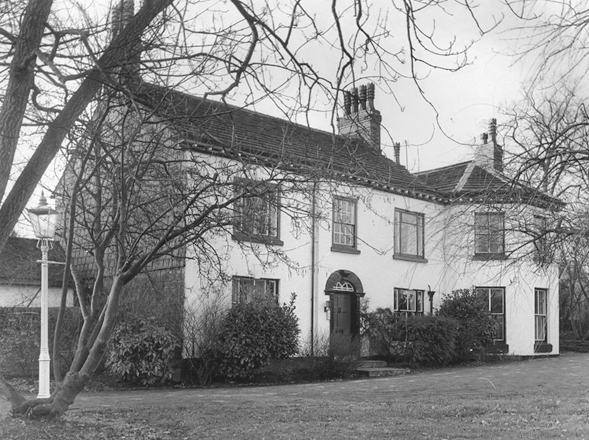 On the opposite side of the road from the Sunday school is Hatherlow House. An 18th century red brick building, for many years painted white, it is thought to have been a public house at one time. The original part has 3 bays and the projecting semi-octagonal wing with a pyramidal roof is a later addition. In 1911 Thomas Boyd, a buyer of cotton goods lived there with his wife Annie, grandson Richard and two servants. Several years ago it was converted into business units. 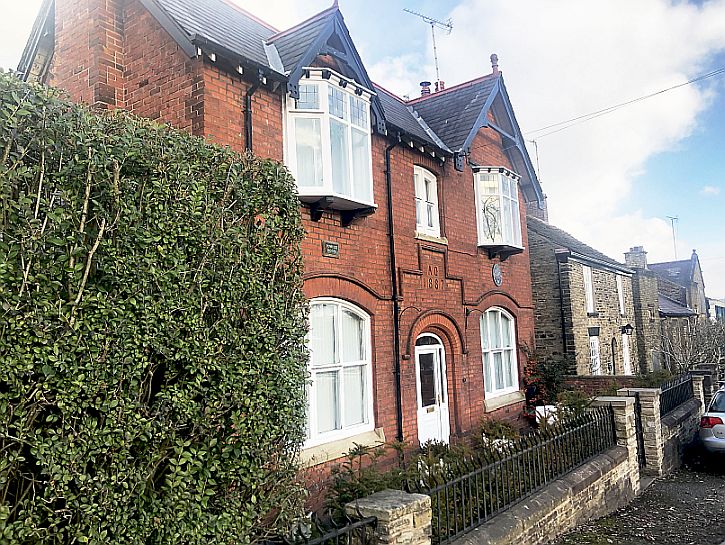 To the left of the Manse is Powicke House, built with machine-made brick and incorporating a date stone 1887. It is named after Dr Frederick J Powicke, who was minister at Hatherlow Church 1886-1916. His youngest daughter Gertrude Mary Powicke (1887-1919) was an early graduate of the Victoria University of Manchester with a degree in Modern Languages. She taught at Manchester High School for Girls before volunteering to work with Quaker nurses in France during WW1. In 1919 she went to Poland to help treat a typhus outbreak, caught the disease and died there. More information about Gertrude can be seen on the wall display in the waiting room at Romiley Station. Gertrude’s name is listed on the War Memorial at Stockport Art Gallery.

The area of High Hatherlow, is mainly made up of former workers’ cottages, clustered around the junctions of Bredbury Green and Gorsey Brow. Between 1851 and 1911 most of the residents were employed in the local cotton mills or hatting industries. Many of the women were probably home workers, described  as felt hat trimmers.