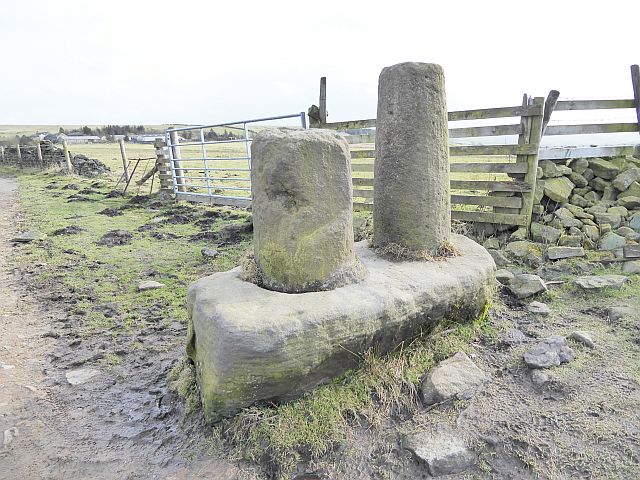 The rough moorland of the Pennine foothills is criss-crossed by tracks which were the main roads of early times when most people had to travel everywhere on foot, or if they were lucky, on horseback. These have become our public bridleways and let us walk and ride freely in the countryside, which has been doubly appreciated during these last few months. Nowadays junctions on these tracks are indicated by official signposts, but long ago most people couldn’t read so there had to be other kinds of markers. Anyone who has taken the track across Ludworth Moor from Gun Road on the edge of Mellor to Monk’s Road above Charlesworth will have passed a prominent stone marker half a mile along the way, known locally as Robin Hood’s Picking Pegs, or Rods. [above] It is a robust gritstone structure consisting of two cylinders, one 3’9” high with a diameter of 19”, and the other slightly shorter at 2’6” but with a 21” diameter, wedged into a plinth over 6 feet long, 4 feet wide and 2 feet thick. The tops of the posts are domed, as if an extra piece should be sat on top, though no one seems to know what this might have been, or why the posts are different heights. In his 1899 book of reminiscences ‘Memories of Marple’, Joel Wainwright gave us a delightful sketch of the monument. Joel Wainwright sketch of Picking Pegs He was sure that there was absolutely nothing to do with Robin Hood, but suggested it could have been an emblem of ancient worship, like the Bowstones in Lyme Handley and round towers in Ireland. But what do we think it was? 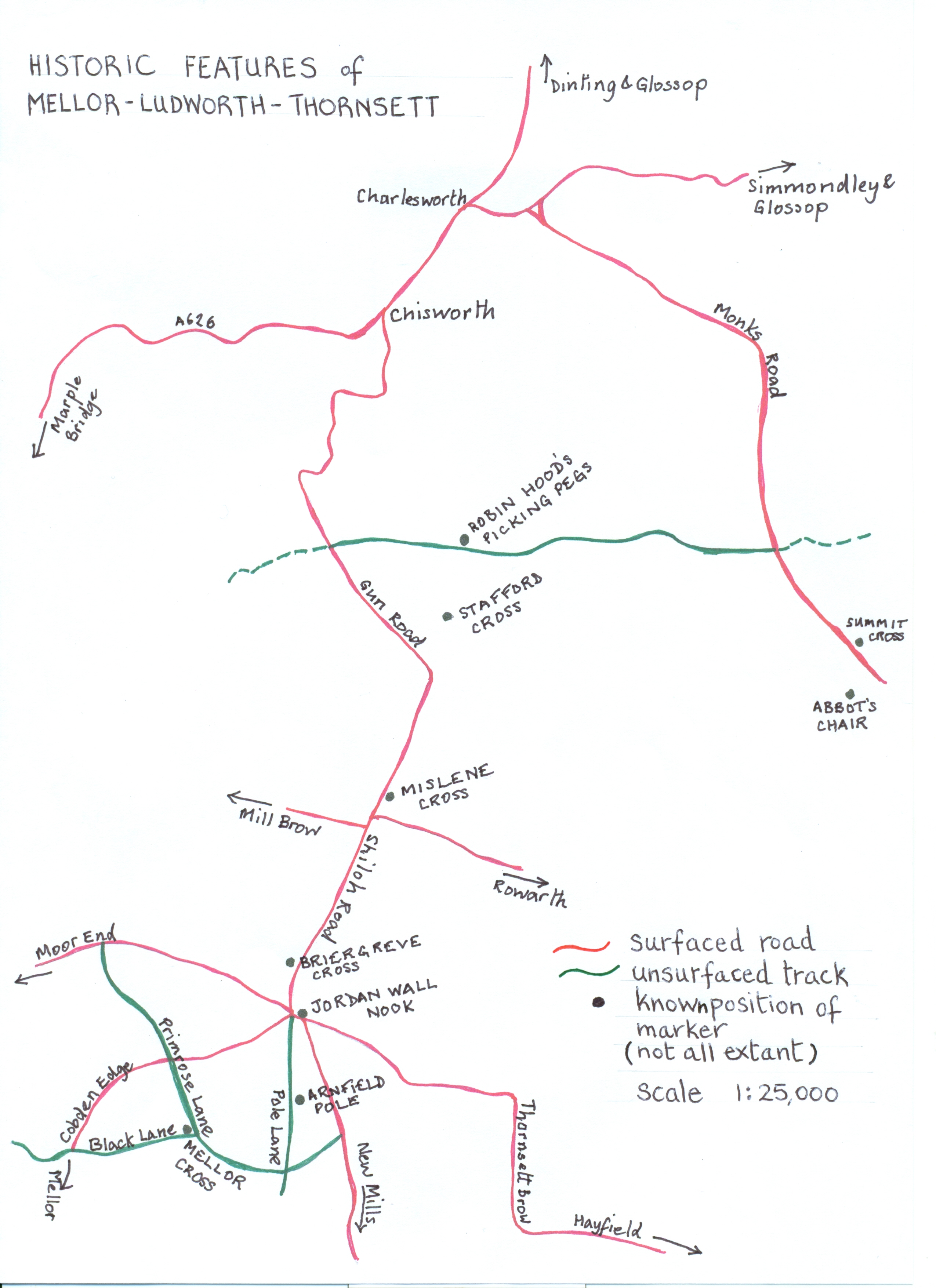 The Picking Pegs probably date from Saxon times. They are at the meeting point of the boundaries of Ludworth, Mellor, and Thornsett, and close to the boundary of Chisworth. From there a line of stone marker blocks went along the edge of modern Shiloh Road, crossed 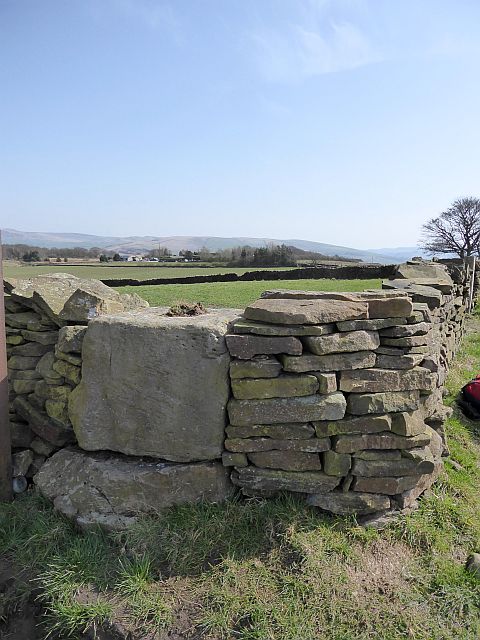 Moorend Road and followed Pole Lane for half a mile then turned west-southwest along a field boundary to the junction of Primrose Lane and Black Lane, where the boundaries of Whitle (New Mills), Thornsett and Mellor meet. These blocks might have had a recess cut into the top where a post could be wedged to make them more visible from afar. There is little trace of most of them now, but the base of Mellor Cross can still be seen, complete with recess for the post, at the junction of Black Lane and Primrose Lane.

The Picking Pegs are in a different league with their two carefully shaped shafts, one taller than the other. It is known that double posts of this kind were used to show where three or more boundaries met, so that ties in. But did they have other purposes? In early times this was an area of subsistence farming with a very low and scattered population. There were few churches, and religious services were often held in the open air. The intersection of the boundaries of several hamlets would be an ideal gathering place. Did the Town Crier come to give out the local news in the days before newspapers, radio and TV? Or did an early court sit there to mete out discipline?

If you carry on along the track past the Picking Pegs for a further mile and a half you will come to Monks Road, now the minor road from Charlesworth to Chunal. This ancient route could well date from Roman times, as the fort of Ardotalia (Melandra) is only a stone’s throw away, but it is at least as old as the track past the Picking Pegs, and there are two marker stones still extant near the junction. The best known of these is the Abbot’s Chair, [below] just next to the gate of Taiga Farm SW of the road. 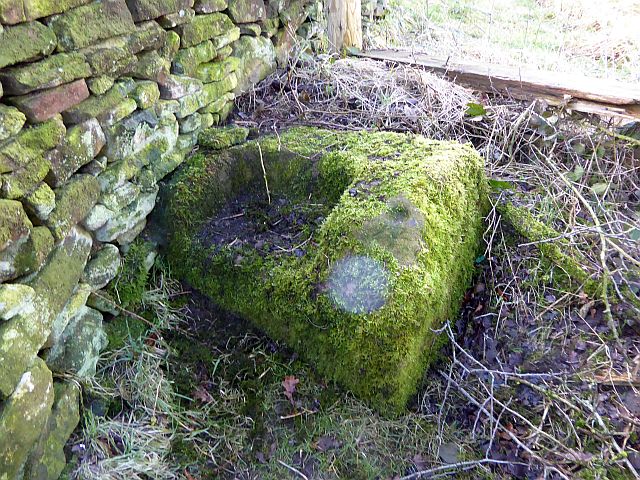 It is a gritstone block with a square recess large enough for someone to sit in and it could have accommodated the base of a stone cross. On the other side of Monks Road in a field near Hollingworth Head Farm is another stone block with a recess on top and it may be the base of Charlesworth Cross. They are at the summit of the road, where you stop climbing up from Charlesworth and begin the steep descent to the A624 at Chunal. This is the point where the lands of Simmondley, Chunal and Rowarth meet, so we might have more boundary markers, or they could simply show the summit of the hill. Monks Road and Abbot’s Chair probably had their names tacked on after the Crown granted the manor of Glossop to the Abbey of Basingwerke in Flintshire in the 12th century. The Abbot’s Chair is well to one side of the present road suggesting either that it is no longer in its original position or that improvements over time have shifted the original road alignment. 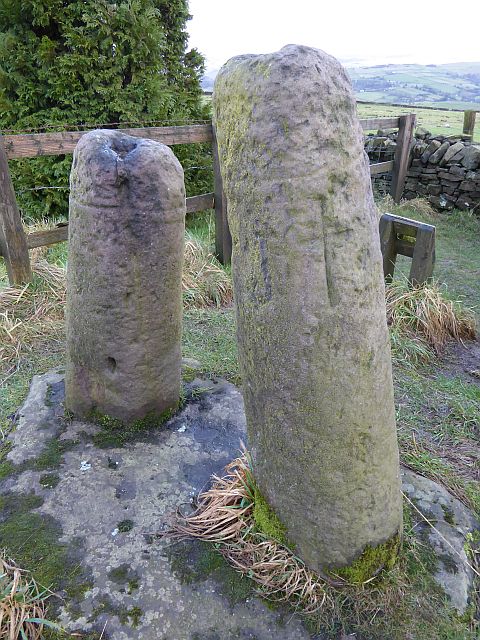 The Picking Pegs are not the only two-post marker around, and one of the best known is very near here. It is, of course, the Bow Stones [right] to the east of Lyme Park on the edge of the hill country of Lyme Handley. Once again we have two stone pillars, one taller than the other, and with domed tops, very like the Picking Pegs in appearance. The usual assumption is that they are a boundary marker, as the parishes of Disley and Lyme Handley meet here, but something about them suggests that this may not have been their original location. Two Saxon cross heads with decorative tracery were found in the field at the back of Disley Parish Church in 1840 and it was thought that these might have been the tops of the Bowstones.Click for an artist’s impression At first they were kept in the garden at Lyme Hall but they have now been moved into the chapel to protect them from the weather. Somewhat later a stone plinth with double holes of a size which would have fitted the Bowstones was found in the church field. This has been placed on the right hand side of the main path up to the church door. So, we have three sets of stones with possible connections but all in different places, and no attempt yet to bring them together.

The structures we have been dealing with were put there in Saxon times, at least 1200 years ago, so there has been plenty of time for people to forget what they were used for in the first place, and to seek to explain them with folk myth, which is perhaps where Robin Hood comes in. Legend has it that the Bowstones were just the right shape for bending your bow to tension the string, and remind us that North West archers were renowned for their skill, and were often summoned to support the king in battle. The ‘holes’ in the story might spur you on to visit the sites, perhaps while out walking, and see what you think about them.