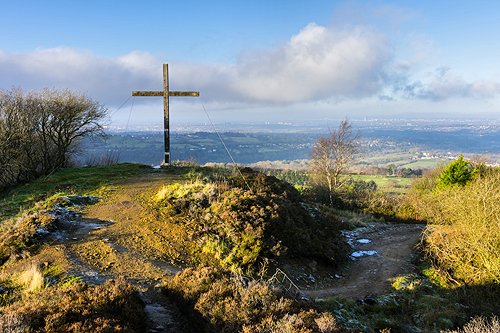 January 1969, saw a ‘little local difficulty’* arise after an innocuous public notice appeared in the Stockport Express, signed by Margaret Knee, then minister of Marple Congregational Church, on behalf of Marple and District Council of Churches (MCC).

This group had been formed in 1960**. The notice proposed the erection of a timber cross at the disused quarry at the corner of Black Lane, high upon Cobden Edge, overlooking the Goyt valley and much of Marple, under the terms of a the Town and Country Planning Act 1962.

The idea of a cross had occurred to John Brown, Lay Observer on MCC. While walking in Marple Memorial Park John, recently widowed, thought how wonderful it would be if a sign, a symbol of hope, could be seen as the eye rested on the horizon, a cross. He suggested this to Reverend Bill Hewison, then minister at Marple Methodist Church and chairman of Marple Coucil of Churches. Being in agreement with John, Bill Hewison put idea forward to Marple UDC on behalf of the Council of Churches. The public notice was the first step.

However the council, at a meeting in March 1969, refused permission, by a large majority, for a permanent cross. Headlines in the local press, at that time.

"The idea of erecting a 30 feet high cross on the highest point in the district Cobden Edge, Mellor horrified some Marple Councillors on Monday

Councillor Seddon said that if they allowed this application, what could be foreseen was similar applications from Communists, Socialists, Conservatives, C.N.D. or Fascists or any other society that wished to erect its particular symbol."

[The Reporter is a locally based weekly newspaper which primarily serves the Metropolitan Borough of Tameside.]

In a reaction to this negative decision MCC arranged with every church in the area to have a cross-themed sermon/talk during the forthcoming Lent.

The group had decided to fight the ban.

Cross in Marple in spite of council's ban

Though the erection of a cross on a permanent site on Cobden Edge Mellor, has been banned by Marple Council, a 30ft. cross will still be erected for the Easter period, on a hill in the urban district.

Marple Council of Churches has temporarily abandoned the plan for a cross on the Edge, but will erect one on the next highest point in the area, which is the Ridge, for Easter 1969

An area within the confines of the Ridge Church was used, as this meant there was no obligatory need to follow the regulations of the Town and Country Planning Act 1962

On Good Friday, April 4th 1969, teams of eight would take turns in carrying the cross, fashioned out of a telegraph pole, from the Memorial Park to the temporary site on the land of Ridge Church. Erection was carried out by contractor John Kennedy. There followed an interdenominational service, and a Passion Play, for which 800 people had processed from Marple. 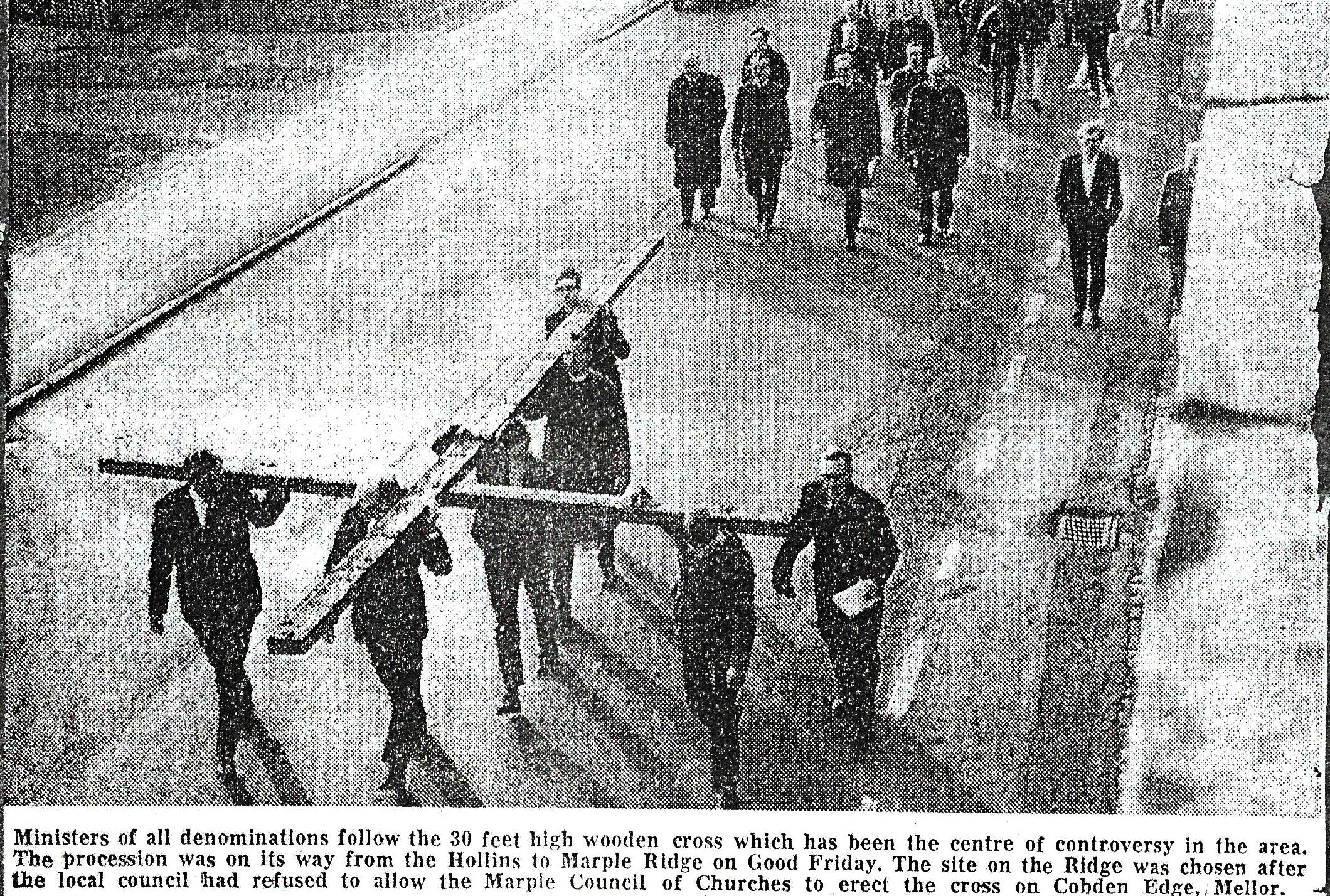 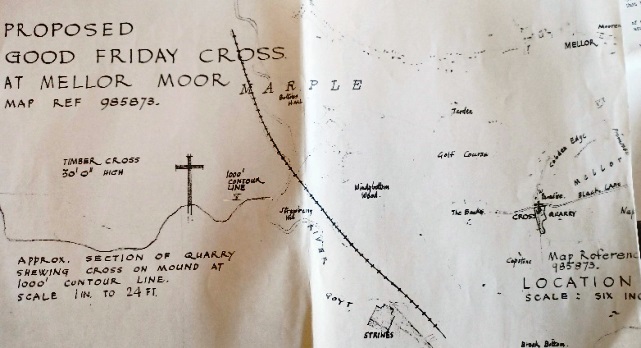 In December 1969 a letter was sent to the Surveyor at Marple UDC from the County Planning Office of Cheshire County Council. The recommendation in the letter was for-

(It is taken, though not proved, that the Council of Churches appealed to Cheshire County Council after the negative vote from Marple UDC. ACounty Council being a higher authority the an Urban District Council)

The turn of the year and the dawn of new decade saw planning permission for a permanent cross granted early in 1970, by MUDC. But fresh controversy then arose, in the form of an appeal to the Ministry of Housing and Local Government by the residents of Cobden Edge. They cited the urban council’s unilateral action, without consultation. The appeal was rejected.

In January 1970 Father John Brown was appointed to the chair of Marple Council of Churches. This was the first time a Catholic had acted as Chair of a Council of Churches. Under his stewardship the council commissioned Ronald Giles to manufacturer a 26 ft pine cross by Easter 1970. The foundations were to be prepared by Wade's of Whaley Bridge. Pouring rain and howling winds did not prevent the erection of the cross, which was transported in pieces to the disused Quarry. The seventeen or so people carrying out the construction were under the guidance of Ron Giles. With the cross ends bound in steel, to preserve the longevity, the steel  guy ropes to provide stability. They were accompanied by a police constable, PC Terry Lomax, in case any breach of the peace should occur, none occured. 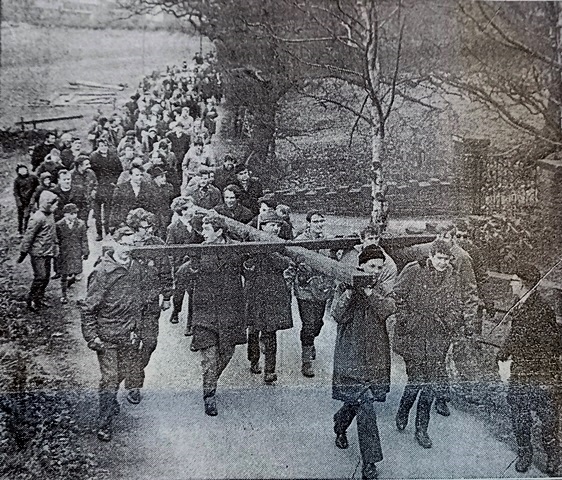 Despite the biting cold, about 250 people, ranging from the young to the old, made a Good Friday pilgrimage from the Devonshire Arms Hotel, Mellor, along the mile long rugged, foot tearing route to the highest point of the district, near Soldiers Nob, for a devotional demonstration around the recently erected 26ft high cross.

To the sponsors, Marple Council of Churches and its many supporters from all the churches of the district, it was a satisfying climax to 12 months of controversy over the rights and wrongs, planning and ethical concerns, over the setting-up of a timber structure as a “permanent” symbol of Christian witness.

A cross of lighter construction was carried by young men at the head of the procession, a symbol, to the site of the newly erected permanent cross. 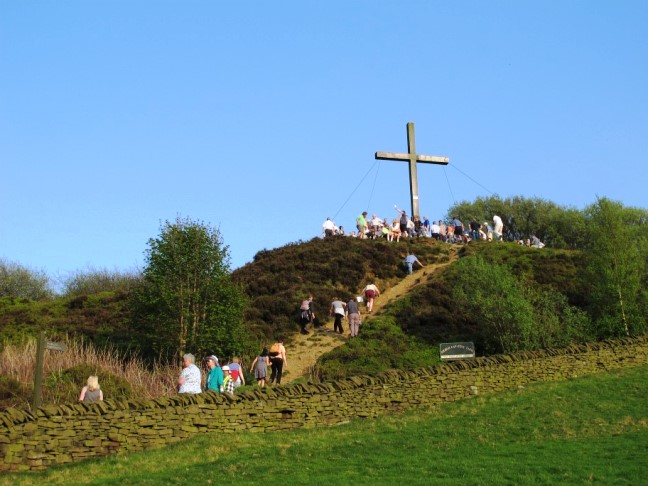 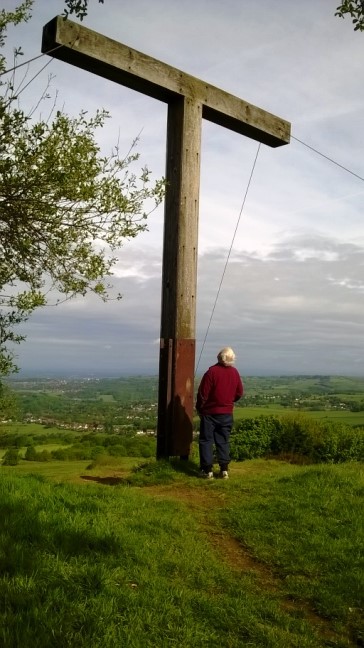 Cast your mind back to the first weekend of December 2015 and it's first weekend, a very wet and stormy time day or two. If you are still struggling to remember that particular weekend, this was the year that Marple's Christmas Cracker was cancelled on the Friday night, before the event, and Marple Bridge’s Saturday Winter Wonderland severely curtailed on the Saturday. The storm also changed the profile of Cobden Cross, to an 18ft ‘T’ seen for miles around. The top was blown off, the wood having rotted over time and failed to resist the weather’s onslaught.

The structure was also now showing signs of decay, it was thought to be unwise to try any form of repair. Following professional advice, it was decided to replace the storm damaged cross with a stronger structure made of galvanized steel clad with wood, in the original position. In the intervening years since 1970 the Marple Council of Churches had morphed into Churches Together [Marple Area] who then started the fundraising effort to raise the £25,000 needed for the replacement cross. This plan of action having been agreed at a meeting in September 2017. The appeal was a great success, so much so, that the new cross was erected on the 16th of July 2018, just over a fortnight after the old cross ‘T’ shaped remains were removed. The design having changed from galvanized steel as originally planned, to solid treated French Oak, which came from a managed forest. A stainless steel cradle would provide a seat for the cross.

Time has progressed since the erection of the first cross by donkey-jacketed members of MCC members. Now, some 40 years later, heavy lifting equipment and professionals are the order of the day. 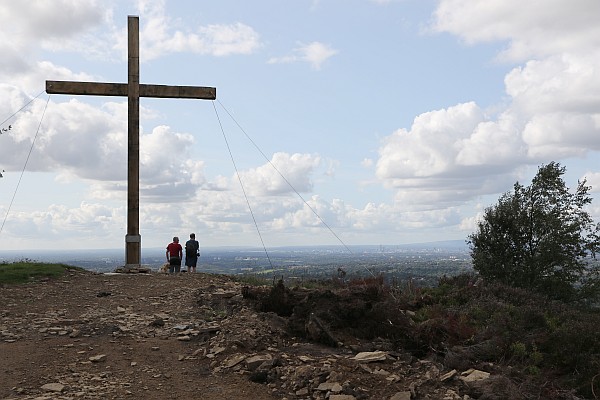 Since it was first erected in 1970 the cross has been the destination for local 'pilgrims' every year bar three, the exception being when snow cancelled play, and the effects of COVID-19.

The cross is said to have a life of 500 years. Who will be here in the 26th century to help organise the next replacement cross?

Should the Council allow it, of course.

The main source for this article was a folder from the archives, the contents may be seen here.

By far the most useful item was the copy of a scrapbook created by Doreen McQuaker, in 1970, 25 pages of  letters, photographs newspaper and magazine articles, together with letters from the Local Council, 1969/1970

anorak fact: In January 1958 the entire government had eighty-five ministers of which thirty-five were related to Macmillian by marriage, including seven of the nineteen members of cabinet.

‘A fellowship of churches which accept our Lord Jesus Christ as God and Saviour.’

However, this was tempered ‘with the understanding that any body which has hitherto been represented on the Commission (of the Churches for International Friendship and Social Responsibility) shall continue in membership of the Council, if so willing, even though it does not itself accept the basis’.

This enabled the Society of Friends and the Unitarian and Free Christian Churches to be associated with the new body. The Roman Catholic Church was unable to be a member for its own reasons but after the Second Vatican Council’s Decree on Ecumenism, it was invited as an observer and continued its involvement until 1990 when the BCC gave way to the new ‘Churches Together’ ecumenical instruments.

(Taken from From Councils of Churches to Churches Together, 2004, by Colin Davey and Martin Reardon)