Transcript of Cassette entitled : Mr. Lenthall.
Mr. Lenthall lived as a boy at Marple Lodge, and as a young man in Mellor Lodge. He left Marple for New Zealand, Australia and Norfolk returning in 1927. When he returned to this district, although he worked in Manchester, he lived in Marple for the rest of his life. He died in 1964 aged 80. ilt at the same time. There was a section of the mill, the stone offices on the south end, where the plaque with SO 1815 on it, was obviously built in 1815.

Opposite Mellor Lodge (left) there were also large buildings of stone for stables and food stores and general stores. The mill was built of brick and was, I believe, six storeys. We lived in Marple Lodge until 1898 but there was a period of 18 months when we had to leave because at 3.0’clock in the morning on Christmas Eve 1893, or perhaps 1894, when we were turned out of the house on account of a landslide. The whole of the embankment fell down and just missed the house and they were expecting a further fall. We went right up to Station Road in Marple to Beech Mount and were taken in by friends, the Heighways at the time. I remember the day after the landslide I was sent to stay with friends of the family in Chapel-en-le-Frith and went past the landslide on the other side of the track. The rails on the up line were standing bare in the air at the time so it wasn’t a very happy place to be in. There was no further fall and it was eventually built up. I should say, in connection with that, that there was a family of six of us, six children and my father and mother . It was rather a do as to be taken in and we were treated very kindly. That’s all I remember of that.

We went to live in The Oaks on Hollins Lane, Marple Bridge, and we returned to Marple Lodge about 18 months after. In the meantime I had gone away to boarding school so I don’t remember quite so much about the place. After the mill was burnt down the only part left standing was the tow

er. My father went up the private road to business. The next morning he met the night watchman who said “weren’t you frightened in the night Mr Lenthall?” He said “what of?” “Oh,” he said, “didn’t you know the mill was burnt down”? Well, we went to look at the mill then, of course what was left of it. There was practically nothing and there was one small hand fire engine there pumping away at something. That’s all there was. There had been other fire engines there. After the mill was burnt down we spent our childhood round there and it was just a child’s paradise, larking about in those ruins. The mill was part waterpower and part steam and there was all sorts of things of interest but they are all buried now or gone and disappeared. I mentioned that the tower was the only part of the mill left standing. Well, shortly after the mill was burnt down (mill post-fire, right) several of us were gathered together, watching some workmen felling the tower. They had erected a platform at the base. They were taking out bricks and replacing the bricks with wooden blocks with a view to burning the blocks and thus felling the tower. They hadn’t proceeded very far when there was a cry “look out she coming!” and she came and they went.

Mellor Lodge was built by Samuel Oldknow in 1790 for his own use and Marple Lodge was built for the Manager of the mill. Marple Lodge was rather a peculiar house. It had two storeys at the front on the road and it had four storeys in the garden which was down below. It had a very nice bush garden, shrub garden rather, but wasn’t much use for f lowers because it was screened by the railway embankment. Then we had a field at the back on which we had a tennis lawn and a nice kitchen garden. Mellor Lodge at the time we lived in Marple Lodge was occupied by Miss Allen who was a very eccentric woman. She kept a girls’ school and kindergarten which I attended for about 12 months or perhaps more. She was eccentric in her habits, if anyone called there on a winter evening they were liable to be met at the door with a red hot poker. What happened to her I don’t know. She left there in about 98 and we left Marple Lodge and went to live in Mellor Lodge then because Mellor Lodge was a lovely house. Looking at a photograph of Mellor Lodge from the back (left) it has three storeys on the right hand side and four storeys on the left. On the right hand side it had a big kitchen and then what we called our living room. The top one was a billiard room, the end of which was divided off by some very heavy mahogany doors and was used as a spare bedroom. The living room was 38’ long about 22’ wide and to give you some idea of its size we used to dance eight sets of lancers in it. The kitchen down below was the same size except there were some rooms for pantries and things divided off it. The fireplace there was a spit which was worked by a water wheel and which was served by a one inch tap.

Of course Mr Samuel Oldknow, (right) when he was High Sheriff of Derbyshire, had no doubt a great deal of entertaining to do. On the photograph showing the back view of Mellor Lodge there is a window which is the window of the hall staircase. The front door opened into a beautiful hall and this staircase wound round with this window 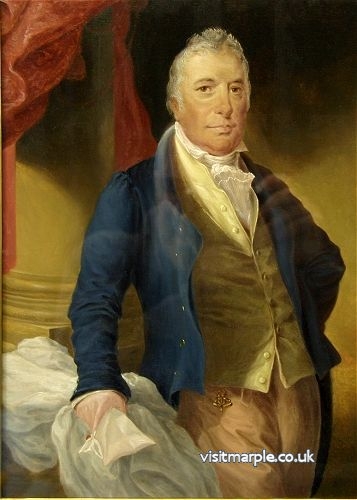 lighting it. Underneath the big kitchen there was a whole series of cellars which were used for bacon curing and various other things. They continued right under the road to the other side, covered all of the underpart of the house and went through in a passage to the other side of the road. We called them the catacombs and they were used for curing bacon and a lot of things of that description.
When we went to the station from Mellor Lodge we went right up the private road and then turned down through Stone Row and then into Arkwright Road and then down to the station. When we first went to live down there was no Arkwright Road. It was built probably 91 or 2, I can’t remember. There was Stone Row and Brick Row running diagonally to St Martins Lane, that’s gone. During the time when we lived in that part the big large gates at Beechwood used to be kept closed at week-ends and holiday times. There was quite a lot of annoyance with people gathered at the gate trying to get through to the promised land which it looked like down there but I think all that’s done away with now. We used to go for walks up Mellor Road and, as far as I can remember, in the early 90’s there were no brick houses at all on Mellor Road though somebody may remember an odd one.

Mrs Lenthall remembered that when her grandmother, as a girl, came to visit relations in Chapel, she made the journey to Whaley Bridge by canal boat and thence by track.

Whaley Bridge by canal barge(?), but of course one can’t always take one’s wife seriously! In the early days in the 90’s we frequently used to see kingfishers up and down the river. I don’t know whether they are seen now but there weren’t any fish in the river not below Whaley Bridge. We used to hear a lot of corncrakes in the meadow and they became pretty well extinct for a time but they seem to have recovered again. I might not have been alive to tell you any of these tales because at one time the horse from the farm, the carthorse from the farm, bolted and came round the corner round Mellor Lodge and just brushed against me as I was standing against the wall . It was finally brought to a stop on the hill.