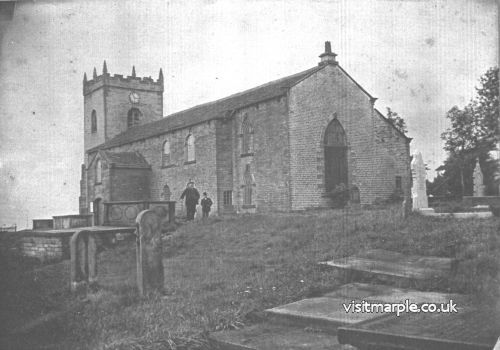 Mellor Church. Note that in this early picture, taken before removal of the balcony, there are still two rows of windows

The views from the top of Mellor Church Tower are a good reward for climbing the narrow unlit spiral staircase and these are of Top Mellor. This area grew around the early cotton mills but the mills have long since gone and occupations have completely changed. Here I was born and lived for the first 37 years of my life before we moved a mile or so down towards Marple Bridge. The other views show the old vicarage with its large and attractive garden and the Hollyvale Valley. On a clear night the view from the church looking towards the towns is spectacular.
There is an early illustration of Mellor dated 1585 which shows the church with a steeple. Many churches at that time had wooden steeples built on the top of the masonry towers, Chesterfield, for example. Later in 1640 the steeple has gone. There is a cross on the roof and a flag on the tower. 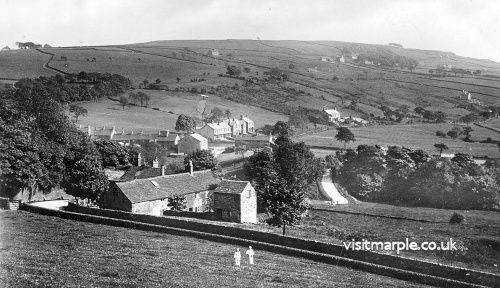 View across Mellor, the new villas on Gibb Lane visible in the centre

My parents came from the Heaton Moor district of Stockport. They married in 1909 and moved to Mellor where I was born in the following year. How fortunate I was that they chose Mellor, it was a splendid place to grow up in. My parents didn’t buy a house nor did they rent one but became lodgers with an elderly lady called Miss Chadwick who lived at this cottage. We were happy in the cottage with Miss Chadwick and lived together as one family. It was she who told me one morning when I was four years old that a little sister had arrived for me. I couldn’t imagine where she had come from and I was most disappointed when I first saw the little object. This is another little object which is me. Here I am again with mother and again with mother, father and Miss Chadwick in the front garden. We remained lodgers for sixteen years before my parents bought a detached stone built house in Gibb Lane in 1926.

This may seem a poor way to commence a married life but my father had problems managing a small, somewhat antiquated, family engineering works in Stockport as well as having to support his mother and three unmarried sisters who were not gainfully occupied, as the tax man might say. To get into debt would have horrified him and he didn’t want to take out a mortgage so we had to wait until it was considered we could afford our own house. Our cottage was a centre one of three. Joined onto us was Sycamore House, bigger and more pretentious than ours and a ginnel ran between, providing accesses to a back road. The end cottage of our little group was a small farm which, with the shippon and barn, formed a ring at right angles to us. The rough back road, just wide enough for a farm cart, was a public right of way leading to a path up the field to the Birchenough Farm. The kitchen and back kitchen of our house and the kitchen of the farm were about four feet below ground level at the back owing to the slope of the land. Flights of stone steps led up to the yard from the adjoining back doors which were separated by a flat- topped stone wall. Across the stoney yard was a long low building, in whi 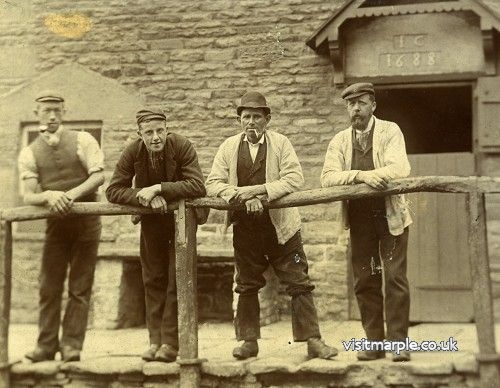 ch were three coal places and three privies. Adjoining was an open rubbish tip for cinders and household refuse. A scavenging cart came round at fairly long intervals to clear these out and it was best to keep out of the way when this happened. The farm midden was at the bottom of the yard, too far away to be a nuisance and it grew in size until carted away to spread over the meadows in autumn. Fortunately there were no pigs.

At the farm lived John Hadfield and his wife Hannah. John, or Jonnie as we called him, was a small scale farmer with two or three milking cows and cart horse. He had a small milk round to nearby cottages, walking there with two large milk cans and a pint measure. There were always hens about in the back yard and a loud cock-a-doodle-do would generally waken us early in the morning. Often Mrs Hadfield would make butter which would mean turning the handle of the churn for an hour or more. It was convenient for us to buy our supplies from the farm and milk, eggs and butter were just passed over the wall. Our neighbours on the other side in Sycamore House were at first the Marslands who lost their two sons in the Great War. I can just remember the sadness this caused in the neighbourhood. Later came the Burns, a family with two grown-up daughters. One of them, Muriel, became very friendly with my mother, often coming into our house for a chat or a game of cards in the evening. Sadly, Sycamore House is no more. It was attractive and dated from the early 1800s but it was demolished about 30 years ago. Our house and the farm date earlier than this. 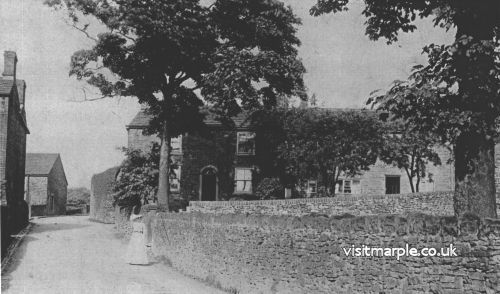 It was about the turn of the century that housebuilding development started at the bottom end of Longhurst Lane.  Before then there were no houses on the main road between Marple Bridge and the Royal Oak Inn and no new ones above. Top Mellor was really 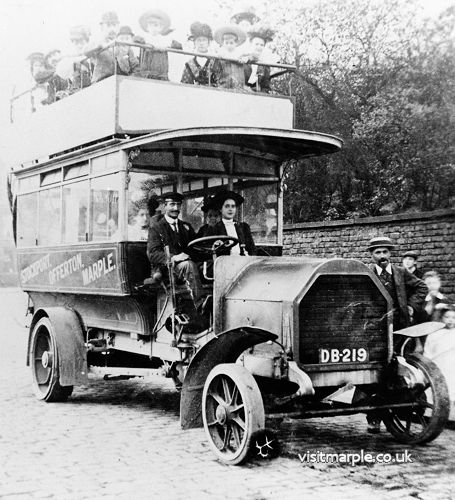 an isolated community.  My earliest recollections of traffic on the roads were of horse- drawn carts for goods and materials and pony traps for passengers so we played our games on the main road quite safely.  Then, after the Great War, motor lorries gradually took over and the first passenger- carrying vehicle appeared.  This provided a service between Marple Bridge and the Devonshire Arms and was started by Joe Hinchliffe, a Marple Bridge man.  His bus was an ex-army Ford lorry with a box-shaped body, built on the flat lorry deck, and solid rubber tyres.  The wooden seats ran front to back and passengers sat facing each other.  Illumination was provided by a headlamp bulb dangling on its wire from the roof. The door was right in the centre at the back and steps led up to it.  A unique feature was a seat for one passenger on the inside of the door.  One evening, as the bus crawled up Cataract Brow, heavily loaded and in bottom gear, the door flew open and the unfortunate passenger, on the seat, fell into the road.  He wasn’t hurt much and he picked himself up, ran after the bus, and climbed back in.  Joe, the driver, was unaware of this happening until told about it afterwards.

Part 2 to appear on March 12th