Coronation ceremony of George V, Westminster Abbey, London, 22 June, 1911. King George V and Queen Mary occupying their chairs of estate. On the left are the bearers of the four swords, and on either side of the king and queen, the supporting bishops. A photograph from the Illustrated London News 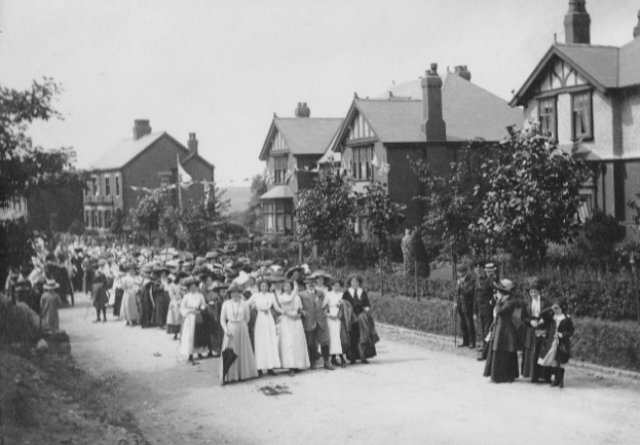 On the 24th June, the King and Queen attended the Coronation Review of the Fleet at Spithead. There were 167 Royal Navy warships together with 187 ships from foreign navies. The crowd of spectators ashore was estimated to number 250,000.

(Adults and children dressed in their Sunday best clothes, an array of beautiful hats.)

These events must have been spectacular. However, in towns and villages across the country, the King’s subjects also celebrated the Coronation in their own way. We are fortunate that a photograph album given to MLHS by our President, Ann Hearle, allows us to see how people in Mellor marked this special event 107 years ago.

There are 47 photographs, which show the procession along Longhurst Lane to the sports club at Mellor, where races for both children and adults were held, followed by afternoon tea. The day ended with a spectacular bonfire on Cobden Edge…and we have a photograph of the blaze itself!

All 47 photographs will be displayed on the Virtual Tour in due course and a selection has been chosen to accompany this article. 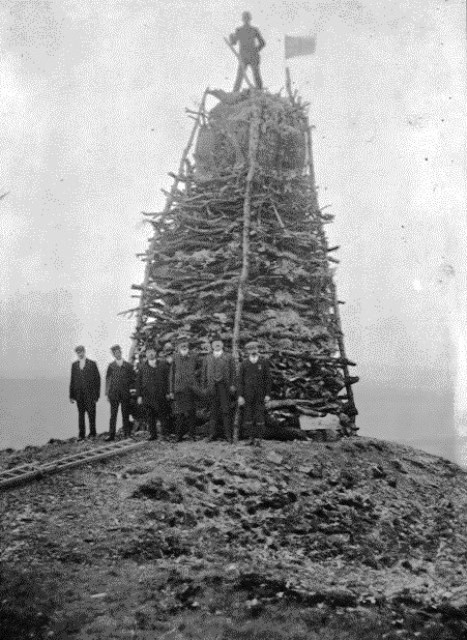 Horse riders and horse drawn vehicles outnumber the one motorcar in the procession although as you will see, the motorcar does have three most formidable looking ladies sitting in the back!

Adults and children were dressed in their Sunday best clothes and there is an array of beautiful hats. The bonfire is spectacular and I assume the men standing beside it helped build it, although I doubt that today’s ‘Health and Safety’ regime would be impressed with the man standing on the top!

The initials AJD are impressed in gold on the cover but we do not know who this was. Handwritten in copperplate on the flyleaf is “Coronation of H. M. King George V, Pictures of the Parish of Mellor Celebrations June 1911.” The captions that accompany the photos are copied from the album.

(below the gallery, a British Pathé video 'Coronation Of His Majesty King George V (1911)')

Three cheers for the King

A place for tea

The Children having tea

The Bonfire on Cobden Edge

The Crowd sang God Save the King