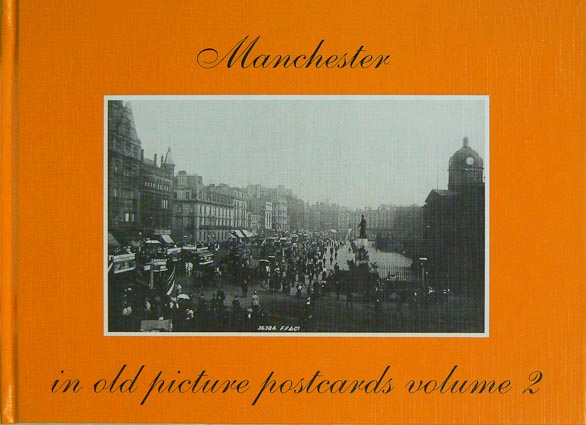 On 19 September 2011, Chris Makepeace's talk opened the season. Chris came to the Evangenical Hall on a  light September evening, with members hurrying to renew or take out their first membership.  As the evening grew into night, Chris talked of the solving some of the mysteries of local history research, in an effort to put in place that last piece of the jigsaw.

Towards the end of his talk, the first in the Society’s new season, one of Chris Makepeace’s illustrations was of the cover of one of his books. After publication Chris was contacted by the small girl in the push chair.

The now lady, wrote that the boy holding onto the pram next to her became her husband later in life, but unfortunately had died shortly before the publication of the book. The lady also solved the mystery of the picture. It was of the evacuation of the children of the Chorlton Park School in September 1939. (Photograph reproduced courtesy Manchester Libraries). 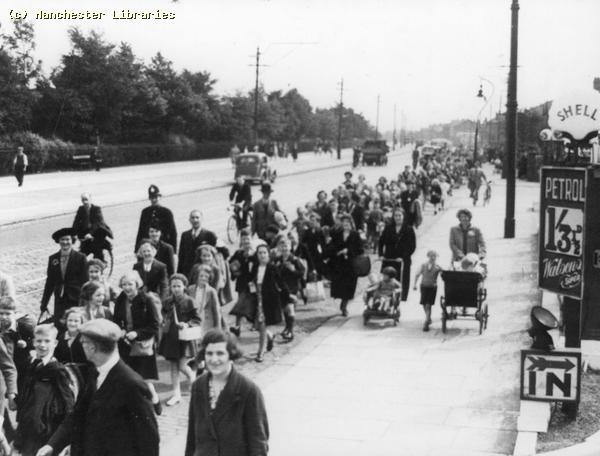 Being the opening night of the Society’s season, Chris had to wait patiently as both existing and first time members were enrolled by the ‘well drilled’ team of committee members. At the start of his talk Chris pondered on a definition for and the present standing of Local History. Perhaps, in definition it could be equated to a jig-saw, with pieces missing, the unanswered questions. A jig-saw of which we can never be sure all the pieces have been found. As the number of those involved in local history has grown, so has the standing of the subject in the field of history. Though at one time tending to be derided by academic historians, it now plays a full role in historical studies with master degrees being awarded in it as well as chairs at universities. Since the Second World War the number of local history societies has grown tremendously. Helped perhaps in no small way by the burgeoning interest in family history, the growth of the web and the research carried out by school children.

The sources that local historians use, to carry out their detective work, to answer questions, and find pieces of the jigsaw are many and varied.

There are many sources that can be used by local historians to find clues about the past. Much depends on the subject they are researching. It is often the case that several sources have to be used to fill in gaps of knowledge. When looking at photographs it may be necessary to use maps as an aid to find exact location of a place. Census or directory entries can be used to discover who lived in that place. Chris gave as an example, researching the Rams Head in the centre of Disley. Until recently little was known of it’s history, apart from it was said to have been built in 1640, but rebuilt in 1840. By chance whilst going through a local paper of 1840 he had discovered an advert which gave the first definite information regarding the rebuild date. This advert also mentions a large lake on which there were boats. Where was this lake? This question was answered by studying a map, not an OS map in this case, but a Tithe map of the area. On later maps, at a scale of 6 inches to a mile, the lake has disappeared, destroyed by the building of the railway, although if you look carefully, there remains boggy ground to one side of the railway, almost certainly the remnants of the lake. Further information was found in the writings of Byng, later Viscount Torrington from 1790. Information from trade directories about coach times and census entries could also help in the construction of the history of the building.

Chris then went on to describe the benefit of details that may be found in Parliamentary papers and the vast number of records held by local government. Ephemera is defined as that material which is printed on paper or other material which has a transient existence, tickets to pocket timetables, broadsheets to theatre ply bills, menus from tea rooms ! Most of this source is thrown away. The range is immense, but they can be of tremendous interest and can help solve mysteries or provide information which is not available elsewhere.

In conclusion, it could be said that the work of the local historian is to bring together a wide variety of sources and to examine them for information concerning the community he or she is studying.