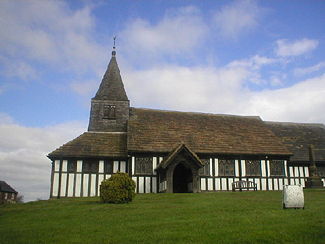 Donald Reid, Society President, entertained the members, with an illuminating and amusing tale of his trips around 'Curious Cheshire'. As the lights dimmed in the hall, Don took the members on a 'Magical Mystery Tour' round Cheshire, which the members may have thought they knew, but soon learnt they didn't ! Chester racecourse, a port for Roman ships, never !

One of the first stops on this virtual tour of Cheshire, no charabanc required, was the White Nancy monument, 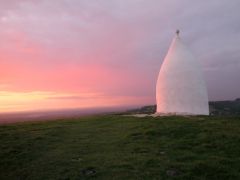 sitting above the village of Kerridge. Though white now, this Grade II listed monument was unpainted until 1925. It had been built to celebrate   victory at the Battle of Waterloo by John Gaskell in 1817, as a summer house. As originally built, it contained a single room, with a stone bench and round stone table. However the entrance is now blocked in. during the Second world War, it was the location of experimental work by the Royal Signal Corps Trials Unit. From its elevated position North Wales can viewed, on a good day (!), over the Cheshire Plain.

Don moved on, taking us on his virtual coach and magic lantern slides through the Cheshire countryside to a Grade 1 listed building, the timbered framed church of St. James’ and St. Paul’s Church, south of the village of Marston. (Shown at the top of the page)This timber framed church, with rendered infill and brick with stone plinth and stone slate roof, is one of the oldest churches in Europe of this construction.  It is an active Anglican Church in the diocese of Chester. The church was founded and endowed in 1343 by Sir John de Davenport and his son Vivian. The 1930's brought the revelation of medieval paintings on the west wall beneath a layer of plaster. 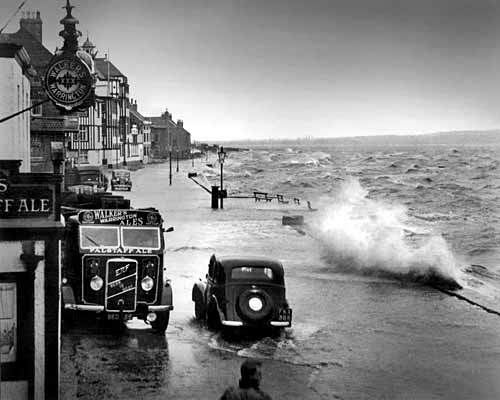 On went the tour, and with the entertaining driver Don continuing his commentary, we alighted at Parkgate, after several other stops on the way. This met with murmured suggestions by some the ladies as a good place to have a cuppa, whilst some gentlemen declared it as a splendid place for ice cream! The village of Parkgate was once famed as a port, being an embarkation point for journeys to Ireland. But as the Dee silted up, the port was lost, superseded up the coast by Liverpool.  Over the former sea wall of sandstone, are now 100 sq. kilometres of salt Marsh. Whilst a port, the local hostelries had had some famous visitors on their books, Emma Hamilton, Nelson's mistress had bathed at Parkgate to aid a skin complaint. Handel had stopped at the port in the time of his writing The Messiah in 1842, prior to the first performance of the work in Dublin.

Chester racecourse and the Roman Quay ? In Roman Times the  sea them lapped against the quay beneath the City Wall, the quay is still there, but the water, long, long gone.

The talk was a treat for the members, giving them a multitude of places to visit, when the warmer and longer days and evenings finally arrive.