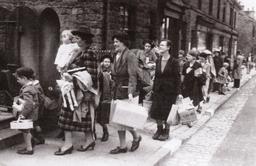 In October 2012, Gillian Mawson visited the Society to present a talk on Guernsey Refugees of the Second World War in the North West.

Gillian began her research into this subject in 2008, at the University of Manchester, concentrating on the thousands of evacuees, both children and their teachers, that arrived in unfamiliar  industrial towns in Lancashire, Cheshire and Yorkshire, as refugees in 1940. Gillian's research has included interviewing  some of those who took part in this flight to the mainland.

Guernsey Mothers Evacuated to England during the Second World War

Since 2008 Gillian Mawson has interviewed evacuees who left Guernsey between 20 and 28 June 1940, just prior to the Nazi occupation of their island. 17,000 evacuees left, including 5,000 children who left with their school teachers. Hundreds of mothers left with their infants and thousands of men left to join the British forces. The evacuees expected to be in England for a few weeks, but because of the Nazi occupation, this turned into five years of family separation. The mothers travelled as ‘helpers’ with the evacuated Guernsey schools, whilst others left Guernsey with their infants to take them to safety. They arrived in the unfamiliar landscape of northern England, penniless and with few possessions. Mrs Eva Le Page (right) had left Guernsey with just the clothes she was wearing, her infant son, and a bag containing baby clothes and feeding bottles.

At Weymouth they were bundled onto steam trains – the first they had ever seen – and sent to Lancashire, Yorkshire and Cheshire. They had no idea of their destinations, despite the efforts of the women and teachers to obtain information. One recalled,

‘We had no idea where we were going. All the stations had their names removed so we kept calling out of the window ‘where are we?’ but no one on the platform would tell us’.

The sight of industrial towns was a shock to these women, who recall their first glimpses of smoking chimneys, double decker buses, terraced houses and factories. One arrived in Oldham and saw

‘tripe in a butcher’s window, but the clogs and shawls and mills were very unfamiliar and different. The people were very friendly but everywhere seemed so noisy after living on a quiet island‘.

Some endured prejudice from people who had no idea that the islanders were actually British. Ruth Alexandre wrote, ‘I told the girls at the Co-Op that we were from Guernsey, and was surprised to hear them say “Fancy! And you speak perfect English too!‘.

Hundreds of Guernsey mothers were scattered throughout England, with babies or infants, 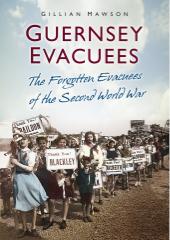 and no money or possessions. Many were trying to find their older children who had been evacuated  with their schools. Most women received a helping hand from their northern neighbours, and as a result they remained in contact with them after the war. Agnes Scott moved into a house in Manchester;

Word must have got around, because neighbours knocked at the door with all kinds of household equipment which were most useful, as we had nothing. A coal man came with two bags of coal ‘With compliments from Mr and Mrs Milligan’, they were an elderly couple, who lived across the road. I will never forget the so many kindnesses we received.

After the war, some of the women decided not to return to Guernsey at all, but to remain in the English communities in which they had settled. Their wartime diaries contain photographs and newspaper cuttings, which paint a picture of the lives that they created for themselves in England between 1940 and 1945.

'Guernsey Evacuees: The Forgotten Evacuees of the Second World War' is published on 1st November 2012 by History Press. It can be purchased online at amazon.co.uk, or you can buy a signed copy directly from the author for £15 including postage and packing. Gillian Mawson, 28b Hill Drive, Whaley Bridge, SK23 7BH.