From somewhere in the hall came the cry “Who’s been messing with my mill”, eyes darted round the room seeking the source. Then the kitchen door opened, light flooded into the gloom and through it came……

The members had come for the Christmas Party that evening.  Eight tables were filled with them. All sat patiently, or did they, as others took their turns at the festive feast spread out, brought by all, and shared by all. Decks cleared, they settled back to hear the story of Mellor Mill and the Wellington wheel pit from Bob Humphrey-Taylor. But then whispers began, “Where is Bob”, “He was here five minutes ago”, but now, nowhere to be seen. And who is that coming through that kitchen door? (L. Wellington Wheel Pit)

Bob gave the members an early Christmas treat, and a great unexpected, undreamed of surprise, as he came dressed as and in the character of Samuel Oldknow.   This alter ego of Bob’s gave us the history of his mill, then, Bob as himself, an insight into the industrious archaeology that takes place on the site of the Mill now.

Oldknow had made his money as a muslin manufacturer in Stockport.  In 1787 he made his first purchase in Mellor, Bottoms Hall Estate. By 1790 he was ready to build his mill, the largest cotton mill in the world, with the world’s largest waterwheel, lying two stories below the ground level of the building.  At the height of its production it had 550 employees, a lot of them women ,and children, aged from the age of eight, working 12 hour days, 6 days a week. Oldknow though a good planner and organizer, was perhaps guilty of straying away from mill affairs. To such an extent that he had to be saved from bankruptcy by Richard Arkwright Junior as early as 1800. After Oldknow’s death in 1828, still in great debt, his half-brother John Clayton became manager for Arkwright for the manufacturing business until the night of Thursday 17th November 1892 when the Mill was destroyed by fire.

The site was then moribund for nigh on a century and a quarter. The brickwork broke down into clay, leaf mould into soil, and trees grew, and grew as this time passed until the Mellor Archaeological Trust came along, with the novel idea of emptying the Wellington Wheel Pit. This endeavour was helped by a £15,000 grant from The Association of Industrial Archaeology, together with £5,000 from the Trust. Plans were to open up the Pit, put up interpretation boards, and open the whole area to the public; this was achieved and celebrated in a grand opening in March 2012. Excavation of the pit had started in June 2011, initially with a 22 ton digger, then in tandem with Bob’s own 1 ½ ton digger in the pit itself, lowered by its bigger brother. Work has continued, almost every week-end and some week days. Volunteers have uncovered the cobbled area in front of the mill, the 20 metre tunnel that took the drive shaft away from the Wellington Wheel, as well as stable for visitor’s horses, under the front projection. Bob had slides of the ‘finds’ from the excavations, these have included wine bottles, tallies, and what appeared at first to be a mysteriously small horseshoe, but was in fact a clog iron.

In September 2012, after two unsuccessful bids, HLF granted £45,000 towards the development stage of the project "Revealing Oldknow's Legacy: Mellor Mill and the Peak Forest Canal in Marple". The main bid, to be submitted in May 2013, will be for about £1.2M jointly with the Canal and River Trust, reflecting Oldknow's promotion of the canal. If approved, the whole industrial complex will be uncovered and opened to the public, plus an innovative approach to digital learning as well as more traditional ways of displaying information.

The corner of the Mill veil has been lifted; we wait, we hold our breath, to see what time will reveal of those past times.

Our thanks are due to Bob, for both his inspiring talk and splendid entertainment.

If this has inspired you to go down to the Mellor Mill site and get involved then you can contact Bob by Email: This email address is being protected from spambots. You need JavaScript enabled to view it. or Mobile 07710 964046 – trowels supplied and training given.  More information is available at http://www.matrust.org.uk/mellor-mill-1792-1892/bobs-mill-diary.html

Chris Mann's video of the Opening of the Whell Pit in March 2012.....http://youtu.be/ckLyEOsJyEQ

On Google books Samuel Oldknow and the Arkwrights: The Industrial Revolution at Stockport and Marple click on 'Preview this book' on the webpage to read inside 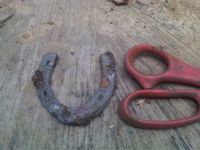 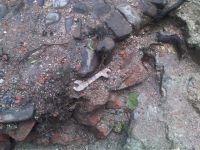 Clog Iron and Spanner, both objects found in the stable area at the front end of the mill