The co-operative movement began in the north of England in a small former woollen warehouse in Rochdale and the national organizations of the movement have been based in this region ever since.

The Rochdale Equitable Pioneers Society was not the first co-operative society, but the 28 original members learned from the experiences of earlier experiments to develop a workable model of co-operation. That model spread from Rochdale and was adopted by groups in other towns and villages across the UK and internationally. By 1865, the fame of those Pioneers had spread and 13 of those still living in Rochdale were brought together and copies of the resulting photograph were sent across the world to those who had followed their story and wanted to know what they looked like.

The story of the Pioneers and their legacy is explored in the Rochdale Pioneers Museum, housed in that original building which has been a museum since 1931. The Museum includes a replica of the 1844 shop and exhibitions which show the development of the movement. The National Co-operative Archive in Manchester has collections showing 200 years of co-operative history. (Museum interior right)

The Pioneers set out not only to open a shop, which distributes profits to the members in proportion to their purchases in the shop, but to change social conditions for the better. 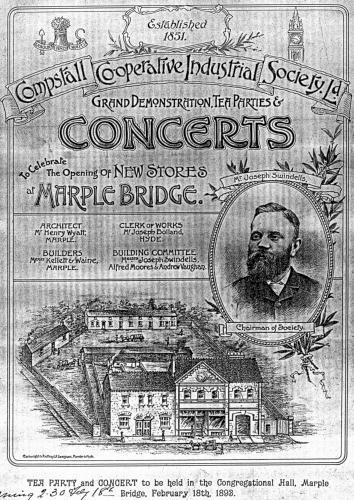 The talk covered different sectors and activities of the movement as it developed to the worldwide movement of today with its billion co-operators in over 90 countries. Illustrations from that development included two films produced in 1938. Blackpool Emporium is a documentary film on the opening of the store, with a roving camera showing the store, staff facilities and the offices. The second is Sam Goes Shopping, a Stanley Holloway monologue about a shopper – Sam. 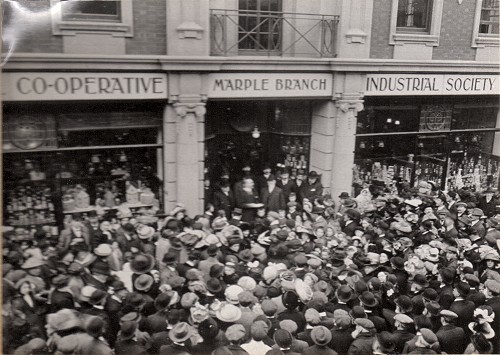