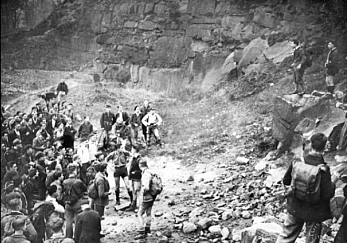 One hundred people or thereabouts were enticed by the prospect of a talk on the Kinder Mass Trespass. They filled the hall 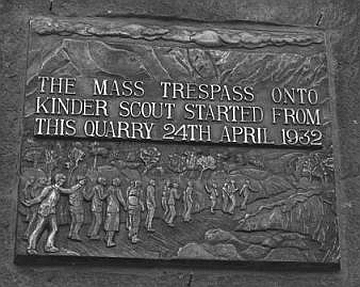 as rarely before. A hall that had been chilly as the 'staff' put the chairs out, but by the time of the talk, requests for the windows to be opened were made. Hopes for the talk were not dashed, Keith Warrender's presentation entertained, enlightened and enthralled the audience.Many resources are present online that document this historically significant event.(see links below) However a couple of factual nuggets that emerged during the evening. The Trespassers did not reach the high plateau of Kinder Scout, among the protesters were such future luminaries as A.J.P. Taylor and Michael Tippet,the walk, led by Benny Rothman,was organised by British Workers Sports Federation.The BWSF had been established in 1923 under the auspices of Clarion Cyclists, Labour Party sympathisers and trade union officials, but by 1932 the Labour Party and Trade Unionists had left the Federation because of conflict with Marxists in the Federation. We must remember that at the same time the Cambridge Five communist spy ring was being created.

A Manchester Guardian article, from the following day of the Trespass.

Four or five hundred ramblers, mostly from Manchester, trespassed in mass on Kinder Scout to-day. They fought a brief but vigorous hand-to-hand struggle with a number of keepers specially enrolled for the occasion. This they won with ease, and then marched to Ashop Head, where they held a 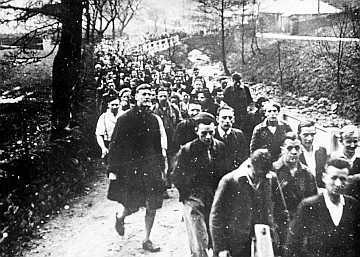 meeting before returning in triumph to Hayfield. Their triumph was short-lived, for there the police met them, halted them, combed their ranks for suspects, and detained five men. Another man had been detained earlier in the day.

For a week past Hayfield has been looking forward with anxiety to to-day's events. Last Sunday members of the British Workers Sports Federation, which has no connection at all with the Ramblers' Federation, distributed handbills among Hayfield's usual Sunday population of ramblers urging them to "take action to open up the fine country at present denied us."

This morning chalked notices on the roads, and leaflets distributed at the station, urged ramblers to meet on the Recreation Ground at two o'clock for a meeting before the much advertised mass trespass. Forewarned is forearmed, and the Hayfield Parish Council at its meeting on Tuesday had taken steps to stop this meeting. Numbers of Derbyshire county police had been called in, and special new copies of the by-laws, one of which prohibits meetings there, had lavishly been posted in the Recreation Ground. The Deputy Chief Constable of Derbyshire and Superintendents McDonald and Else came to see that this regulation was observed, and Mr. Herbert Bradshaw, the clerk of the Parish Council, was there to read the by-law publicly if the ramblers attempted to make speeches.

They thought better of it, and punctually at two o'clock the four hundred or more ramblers who had gathered there set off for Kinder reservoir and Kinder scout. As they marched they sang. They sang the "Red Flag" and the "International."

By the time we got to Nab Brow we saw our first gamekeepers dotted about on the slopes below Sandy Heys on the other side of William Clough. In a few moments the advance guard-men only, the women were kept behind -dropped down to the stream and started to climb the other side. I followed. As soon as we came to the top of the first steep bit we met the keepers. There followed a very brief parley, after which a fight started-nobody quite knew how. It was not an even struggle. There were only eight keepers, while from first to last forty or more ramblers took part in the scuffle. The keepers had sticks, while the ramblers fought mainly with their hands, though two keepers were disarmed and their sticks turned against them.

Other ramblers took belts off and used them, while one spectator at least was hit by a stone. There will be plenty of bruises carefully nursed in Gorton 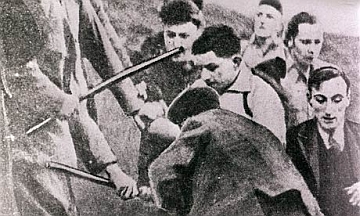 and other parts of Manchester to-night, but no-one was at all seriously hurt except one keeper, Mr. E Beaver, who was knocked unconscious and damaged his ankle. He was helped back to the road and taken by car to Hayfield and to Stockport Infirmary. He was able to return home to-night after receiving treatment. After the fight the police chiefs, who had accompanied the mass trespassers, left them alone to their great though premature relief. The fight over, we continued up-hill, passing on the way a police inspector bringing down one rambler, who was subsequently detained at Hayfield Police Station.

Soon we turned to the left and continued along the hillside towards Ashop Head, the summit of the public footpath from Hayfield to the Snake Inn on the Glossop-Sheffield road. Before we regained the footpath a halt was made for tea, and the Manchester contingent was joined by a party of about 30 from Sheffield, who had marched from Hope over Jacob's Ladder, from the top of which they had watched the battle with the keepers. The trespassers were urged not to leave any litter about, and to their credit it must be said they were particularly neat in this matter. On Ashop Head itself a victory meeting was held, and the leader who at an earlier stage had asked us to trespass in spite of all danger now congratulated us on having trespassed so successfully. We were warned that some ramblers might be unfortunate enough to be fined, and for their future benefit the hat was passed around.

This done we made our way back 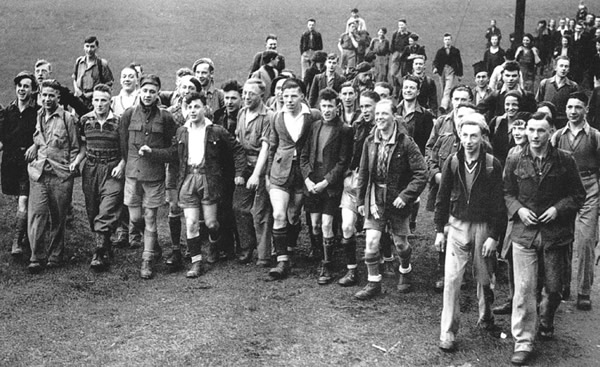 to Hayfield, keeping religiously to the footpath this time. Near the Stockport Corporation Water Works we met the police once more. One policeman made a move as if to detain one of the leaders, but he immediately took to his heels and was closely followed by a large number of ramblers, who so crowded the way that the policeman could not have got near him if that had indeed been his intention.

At the first beginnings of the village the ramblers were met by a police inspector in a "baby" car. At his suggestion the ramblers formed up into column and marched into Hayfield, still over 200 strong, singing triumphantly, the police car leading the procession. It was their last happy moment. When they got properly into the village they were halted by the police. Still they suspected no ill, and it was not until police officers, accompanied by a keeper, began to walk through their ranks that they realised they had been caught. Five men were taken to the police station and detained. The rest of the now doleful procession was carefully shepherded through Hayfield while, as the church bells rang for Evensong, the jubilant villagers crowded every door and window to watch the police triumph.