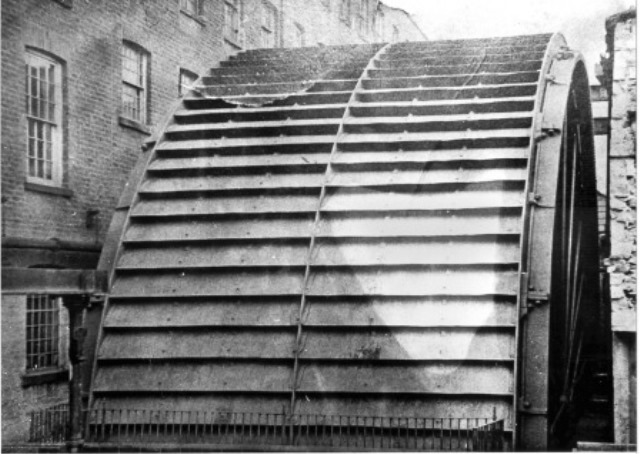 Photo: Lily Wheel at Compstall Mills. Said to be the largest waterwheel in the country at the time of its installation in 1838.

Our own local historian, Judith Wilshaw, gave us the first talk of 2016. Appropriately for a local historian, it was a local subject - Compstall - and she managed to distill the essence of this neighbourhood in her talk. Compstall pointed the way to an industry-wide developments in cotton manufacturing. It was created from scratch as an integrated concept where one company carried out all stages of the process from spinning through to dyeing and printing. 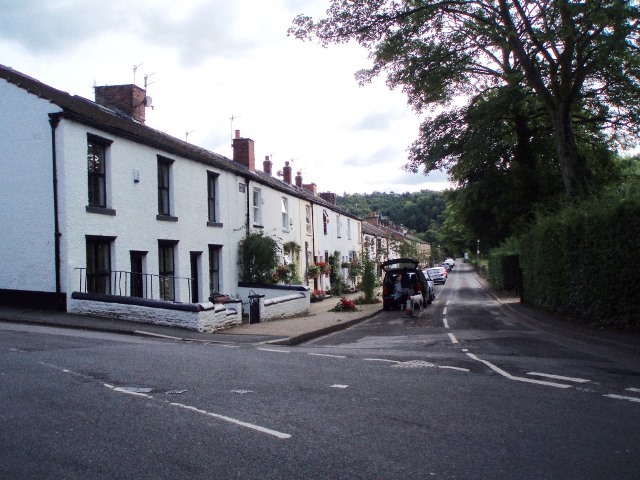 , coal from local mines and good transport links via the Peak Forest Canal and the network of new turnpikes to Stockport, Glossop, New Mills and Buxton.

The Andrew family had built a textile printing works in Harpurhey and had sufficient capital to expand. Thomas Andrew started by building facilities for dyeing and printing cloth, a building which still survives. However, he and his son, George, saw the potential in the area for a more ambitious enterprise. In 1820 they purchased 600 acres along the river as well as strengthening the bridge but the one thing that was missing was people – there were only a few houses in the district. Over the next four years houses were built for the growing workforce. (Montagu Street, Compstall, left) The family had already shown their commitment to the area by investing in the Glossop to Marple Bridge turnpike and purchasing Werneth Hall. Over time they built several substantial houses in the area including Green Hill which became the main family home. 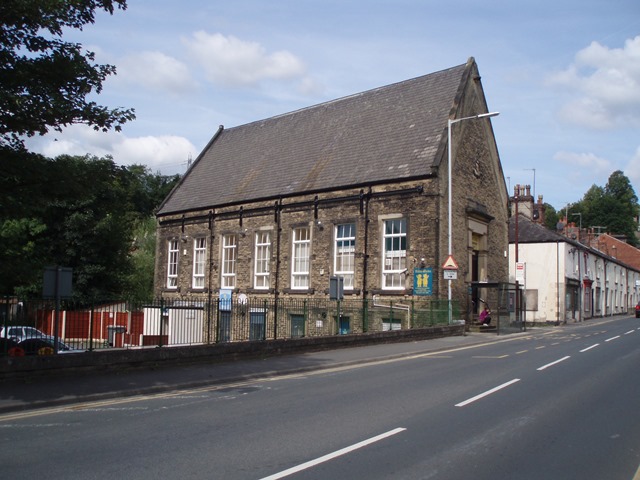 The Andrews were very conscious of the social needs of their workers and they donated land for a Wesleyan chapel and Sunday School as early as 1825. However, the family were staunch Anglicans and they arranged and largely paid for St Paul’s Church in 1841. Perhaps the crowning achievement was the Athenaeum (right), a reading room and a meeting place for a range of self-improvement societies.

The enterprise gradually expanded. After the dyeing and printing came a succession of new buildings for the spinning and weaving of cotton, making a fully vertically integrated production. Initially the power came from waterwheels. When the first mills were built engineers had modified the course of the Etherow in order to build a large reservoir providing constant power for the mill. A large weir was built about two thirds of a mile upstream and water channelled from there to the reservoirs adjacent to the mills. As early as 1833 two steam engines were in use to supplement water power, as there were problems with the flow of the Etherow. Matters were made worse by Manchester Corporation as they developed the reservoirs in Longdendale between 1848 and 1877, gradually reducing the flow. The factory moved to water turbines in 1870 and then steam engines in the 1890s, finally moving to electric power in 1915. By then the Andrew family were no longer involved in the mill. The younger generations did not have the same involvement as George Andrew and his father and the industry generally succumbed to over production. In 1899, along with the majority of printing firms, it merged into the Calico Printers Association. The print works were closed but the mill carried on until the 1960s.

However, one institution outlived the mill. 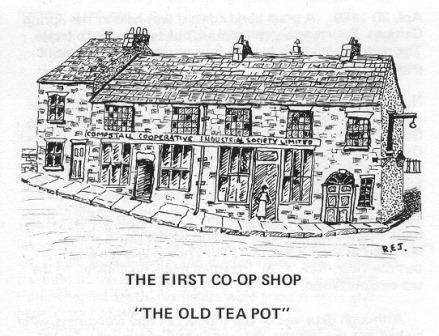 he Compstall Co-operative Industrial Society was formed in 1850 (first shop, pictured left), only six years after the original Rochdale Pioneers opened their shop in Toad Lane. (See the talk by Gillian Lonergan in September 2013.) George Andrew was sympathetic to the organisation, but its success was the result of good management and strong local support from members. From its earliest days it served a customer base over an area much wider than its name would suggest and it gradually spread a branch network over that area. The first expansion was the opening of a store in Marple in 1874. This was followed by stores in Romiley and in Hawk Green before a new head office was opened in Marple Bridge in 1892. Marple Bridge was chosen because of its proximity to the station. Six years later the Co-op opened a drapery department in a purpose-built building in Marple this was followed by a new store in High Lane. The Mellor store opened at the end of the Great War and in 1936 the Co-op recognised the demand from the new housing estates in Rosehill and Cherry Tree Estate.

200 years after the Andrew family first came to Compstall, the village has preserved much of its history even if the use has altered. The Athenaeum, the Chapel, the workers housing, the mill and the Co-op can all be seen, much as they were when they were first built. The village is proud of its past but facing the future with confidence.