Slum housing was not a unique phenomena of the Industrial Revolution; John Milton had complained about it 200 years before:

“As one who long in populous city pent,
Where houses thick and sewers annoy the air”

However, Manchester in the nineteenth century took slum dwelling to new extremes. No one was more qualified to describe this than Mike Nevell, our speaker. As Head of Archaeology at the University of Salford he has been involved in investigating living conditions across the Manchester region for more than twenty years. With detailed investigations at over 200 sites it is possible to give the human background to the Industrial Revolution.

To put the subject into context, the population doubled between 1801 and 1821 and doubled again by 1851. During that period the built-up area increased very little so living conditions became more and more cramped. Conditions were poor in most of central Manchester but four areas were particularly bad - Angel Meadow, Ancoats, Little Ireland (south of Oxford Road station) and the Islington area in Salford. These were among the areas that Friedrich Engels studied for his book “The Condition of the Working Class in England” published in 1845.

Mike Nevell defined the slum areas as having most, if not all, of the following characteristics:
Largely immigrant occupied
Overcrowded
Poorly built
Poor ventilation
Lack of sanitation
Disease ridden

It is obvious why immigrants such as the Irish, and later the Germans and the Jews and the Italians, kept together - they developed a group identity; communities for mutual support and security, but why did people come from the countryside to live in such appalling conditions? Because a rural life was not a bucolic experience. Although there was more space and cleaner air than in the cities, the houses were just as cramped, as unhygienic and as poorly built as in the cities. The level of poverty was more extreme than in the fast growing cities and there were regular jobs, albeit poorly paid, for all members of the family,

However, when they arrived in the city they must have been shocked. Overcrowding was ubiquitous. A mid century report on sanitary conditions in Manchester described the housing it found -
“Cellar 3 is but one room about 12 feet by 14. There are two beds in the room. 7 people live & sleep in this one room.”
Houses were built close together and more were infilled wherever there was room. A “Courtyard” was a grand name for a warren of badly built, cramped and insanitary dwellings. The alleys between the houses were often no more than a metre or two wide and in those conditions sunlight rarely penetrated to the ground.

Back-to-back housing was often the norm because not only did it save space but it was also cheaper to build. Often just one layer of bricks separated one dwelling from another. They were usually one up, one down but sometimes they had an attic which could be rented out to another family. Invariably there was a cellar with a separate entrance where another family lived and there was a communal earthen privy and midden heap for all the families. Cellars in particular were prone to flooding and the clay soils on which many of the houses were built did not help matters.
Each of the back-to-back houses shown in the diagram would house three or four families in very cramped conditions - the cellar, the ground plus first floor and the attic.
Middens are usually a treasure trove for archaeologists but surprisingly the Manchester middens yielded little. When the Bridgewater Canal was built there was a cheap method of transporting night soil to the country where it could be used so the authorities made regular collections. Regular was not necessarily frequent so there was still plenty of opportunity for disease to breed in the middens and privies carried by rats and other vermin. Water borne diseases such as cholera and typhoid were also prevalent. In 1832 cholera killed 700 people in Manchester but there were other reasons for contaminated water. Numerous other industries sprang up to serve the cotton mills ranging from engineering to chemicals to food processing. These were often small-scale factories sited cheek-by-jowl. Their waste was invariably disposed carelessly and if there was a well for drinking water close by that was just too bad. 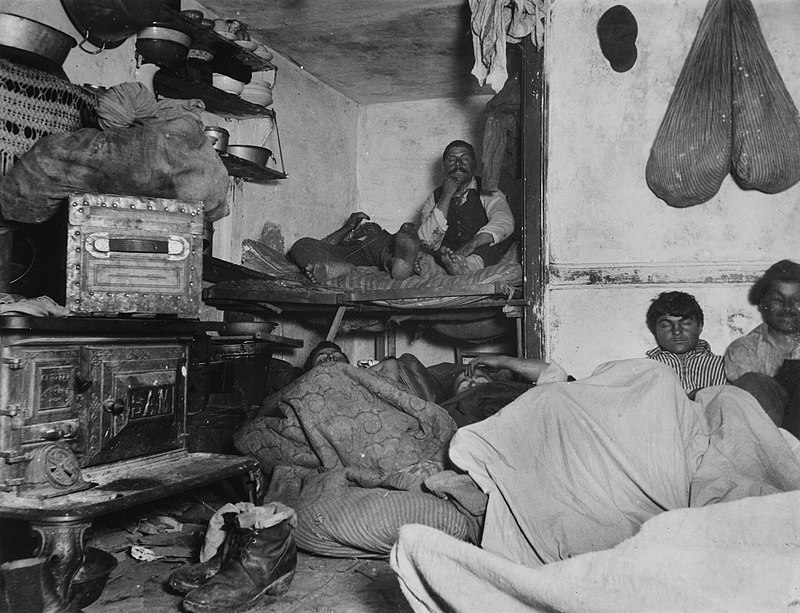 These appalling conditions could not continue. Over the course of the century various reports on health and sanitation highlighted the problems and the development of strong and effective local government in the latter part of the century made changes, some dramatic, some more gradual and piecemeal. However, the slums lasted for many generations. Many lasted till the Second World War when bombs completed the work in many places that councils had begun. A legacy we are all pleased to see the back of. When looking at our own local history we sometimes wonder at the conditions in which our ancestors lived. Fortunately the industrial housing provided by Samuel Oldknow, George Andrew or Thomas Carver was quite palatial in comparison with Ancoats or Hulme. (left:Not just ten to a room but three to a bed)

A memorable talk by Mike Nevell which will stay with us for a long time.