Ruth Colton, our speaker, arrived in Marple as a newly minted PhD. That very afternoon she had passed her final oral examination and could now call herself “Doctor.” Although she was not able to advise upon the various aches and pains endured by our members she did deliver a fascinating talk on the development and use of Whitworth Park. Her particular interest was in how the children were supposed to use the park and how they actually used it in practice. She had been part of an archaeological team excavating in the park and a lot could be learned from the detritus lost or thrown away over the years. Describing this in the context of the park history brought the subject to life as it contrasted the “top down” influences of the powers that be with the “bottom up” influences forced on the park by the children. The adults might prefer the bandstand and the meandering pathways but the children congregated behind “the Mound” where they could play out of sight of the grown-ups. The park itself was a relative latecomer in the development of urban parks. There is some dispute as to where the movement started but the causes are generally agreed. Rapid industrialisation in the early nineteenth century had led to equally rapid urbanisation with densely packed neighbourhoods filled with overcrowded housing for the workers. The middle classes were well aware of the problems this led to - social problems, health problems and crime problems. As a result there were many reform movements, one of which pressed for open spaces to be provided for recreation and relaxation.

The first true urban park was probably the Derby Arboretum opened in 1840 by Joseph Strutt for the millworkers but the man who is really associated with the new wave was Joseph Paxton - he of Chatsworth and Crystal Palace fame. He was responsible for the layout of Princes Park in Liverpool (1842) and Birkenhead Park (1843.) This last, developed and embodied the main elements of later public parks and is generally acknowledged as the first publicly funded civic park in the world. The park, which was designed to be natural and informal rather than a structured neatly arranged urban garden. Other cities soon took up the idea and Peel Park in Salford was opened in 1846 as the first of three public parks in Manchester paid for by public subscription. Although Manchester was in the vanguard of the new movement it fell behind and in the next few decades swaths of housing were built in Chorlton and Moss Side with little access to open space. Rusholme had originally had some large villas with extensive grounds but the encroachment of back-to-back housing had made this area less desirable. When Sir Joseph Whitworth died in 1887 he left £1.25 million (about £150 million in today’s values) for educational purposes. One of his trustees who lived in Victoria Park had previously tried to persuade Manchester Corporation to buy an estate that was on the market but had failed. Now, with money from the Whitworth estate he persuaded his fellow trustees to buy two adjacent estates and started to create the Whitworth Institute and Park. The park was designed as a “Pleasure Garden” complete with a boating lake, a band stand and formal flower beds. The earth dug out to form the lake was used to create a mound where the children often avoided the supervision of their parents. The park opened in 1890 and was very popular attracting several thousand visitors at weekends and many more when special concerts were held. However, the Whitworth Institute decided it was not in the business of supervising parks and in 1904 it handed the park over to Manchester City Council on a 1000 year lease for a nominal annual rent of £10. The Institute itself, when it opened in 1908, was described as “hard, mechanical and uncompromising” - a fitting tribute to Sir Joseph Whitworth. 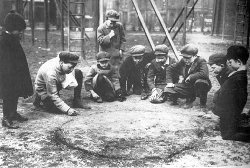 The park has seen its ups and downs since then and it has changed significantly with more open spaces and less formal walks and flower beds. The boating lake has gone as also the statue of “Christ Blessing the Little Children” However, Ruth described the work that has been carried out by a consortium of interested organizations. A community project has been established bringing in the Department of Archaeology, the Manchester Museum, the Whitworth Art Gallery, the Friends of Whitworth Park and a local Muslim Resource Centre. Helped by the Heritage Lottery Fund the project has aimed to uncover some of the history and biodiversity of the park. She described the specific digs undertaken by the department and many of artefacts found. Many of the games Ruth described were very familiar to the audience and in question time there was some expert opinions ventured on a variety of esoteric subjects ranging from the names of the various marbles to the economics of returning pop bottles for refund.

A fascinating talk that brought back many memories of the park and children’s games.