The Society trip to Robinson’s brewery, a tale of three tokens, two baker’s dozen, and one tower of 54 steps.

Judith Wilshaw had kindly organized this tour, this ‘trip’ in which a coach was not to be seen, but cars parked, buses caught, or even a rather long walk taken to meet at the appointed hour in the Visitor Centre. The brewery is an impressive Victorian building, having a prominent position in the Stockport skyline. It rests on the foundations of the Unicorn public house, beginnings of the family business, the six generations of whom have continued to manage the brewery over the last 175 years. 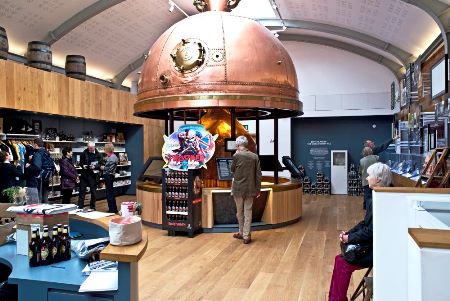 The foyer (right) of the centre proved to be a large, bright modern room, housing a mixture of modern displays and old fashioned brewing memorabilia. The room is dominated by a huge original copper vessel, complete with dents in the sheet metal caused by brewers throwing in lumps of sugar during the years of service, supposedly.

Names having been checked off on Judith’s list of attendees, compulsory health and safety information read and inwardly digested, the twenty six brewery tourists, were spilt in two equal parts. Those lucky enough to be placed into the first baker's dozen set off almost immediately. But first we were introduced to our guide, Ann Beswick. Ann, we learnt, besides her involvement in the Robinsons Tours, conducts historical walks around the centre of Manchester.

Passing through a door we moved from the modern build of the Visitor Centre to the Victorian build of the brewery proper, via a tower of steel mesh steps, a veritable North Face. Not 39 but 54 steps in total; no lift; no breath.This carried us to the top of building, an area that houses the beginnings of the brewery operations. These processes are gravity fed, in a succession of operations to ground level. 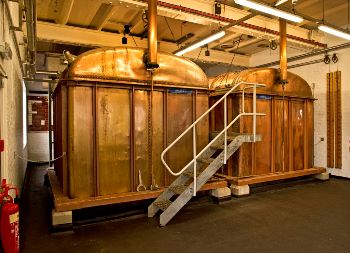 The water used originates in the Manchester Aquifer, which is some 600 feet below ground. This fairly soft water is tested every day for mineral content and then ‘Burtonised’, as required. Burtonisation is the act of adding sulphate, often in the form of gypsum, to the water used for the brewing of beer, in order to bring out the flavour of the hops. The water level in the holding tanks, (left) each a containing a paltry 12,000 gallons,(strong floor!) i.e. 96,000 pints to quaff, is indicated by wall mounted gauges connected by an ingenious systems of wires and pulleys to the tanks.

We passed into the Mill Room, to meet and appreciate two generations of brewing kit. The first generation, the Seck Mill, (below) assembled in the 1920’s, and still in working order, came with two spare rollers when bo 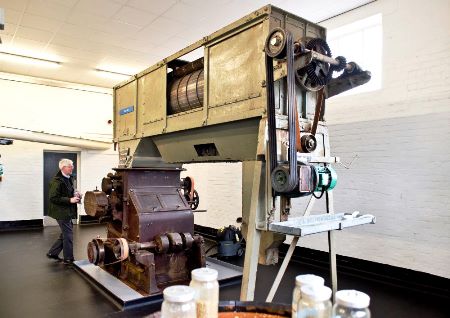 ught; neither of these have been used. The Mill was used tp grind malt into granular siized pieces. This ground malt was mixed with water in order to dissolve the starch, sugar and enzymes within the malted barley.  Malt is transported from ground level by hoppers and conveyers, and then fed through an Archimedes screw. The second generation of machinery, the new Steinecker Variomill is a gleaming creation in stainless steel.This both wets the malt and crushes it. This room also houses the Vapour Condenser. Waste heat is captured at the top of the building and is then passed to this device; this has helped reduce energy consumption in the brewery by 30%.

Malt is broken down to release sugars. Most malt is British grown, but some used for lagers and beers of similar ilk are sourced from the other countries within the EU. We were shown and had passed around a variety of malts for feeling and tasting. (below) The description of one malt as ‘dark chocolate’ is not to be taken as a literal description of its taste, as your correspondent can confirm. The malts are purchased two years in advance of delivery, to ensure that the quality and supply is assured. Malted barley is barley that has been allowed to germinate (sprout) to a degree, then dried. Malt is the most expensive item in the brewing process. 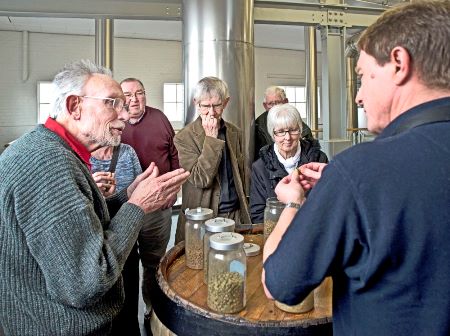 The new Steinecker brewing equipment was installed between 2010 to 2012, by the Krone conglomerate at a cost of around £5 million. There was no British company which could provide the same service. The decision was made by the Robinson family to install the new equipment (requiring the removal of the main roof) in the existing brewery, but to retain the examples of original apparatus in place, where the needs of the new equipment allowed,to celebrate their history on site.

We traipsed down the stairs to the next level, the mashing level. The combining of the crushed malted barley and water, which is then heated, is known as mashing. The wort thus produced is the fuel for the brewing process. This is held in a holding vessel until the previous brew has been emptied out of the copper, in which wort is boiled and hops added. The cereal cooker, for cooking wheat, rice, corn or other grains that might be used in special beers, shared the space. Alongside the stainless steel mash tun was one of greater vintage. This veteran piece of equipment was cleaned by hand, in sweltering conditions, with the workers receiving their own beer allowance. Robinsons are particulary proud of their Hopnik, the 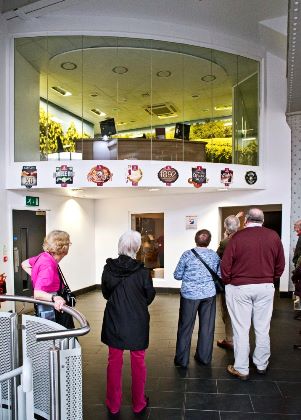 largest in the world. It acts as a strainer to extract flavours from ‘leaf’ hops. Conventional brewing boils this away; here they are in the finished beer, adding to its flavour.

Moving on we encountered the Control Cabin.(right) One of the surprises on the way round was the small number of staff needed to man the operation of the brewery; at times the building seemed deserted, apart from ourselves. Peeping into the Control Cabin we saw a couple of computers and various monitoring displays. Brewing is carried out five days a week, Sunday being a closed day and Friday, cleaning day. The brewer sets out the hops required for the beer at the start of the brewing process and these are then added to the liquid in the Hop Preparation room, which shares its space with the Control Cabin.

Descending further we reached the Coppers Room. Here the wort is settled in the fermenting vessels after passage through the Whirlpool, which filters and cools the liquid through a heat exchanger. There was a sizeable collection of fermenting tanks, all open. It is possible to make three brews a day, with a week being allowed for fermentation. Bottling and kegging is carried out in Bredbury. The brewing process has been continuous on the Stockport Hillgate site for 175 years. 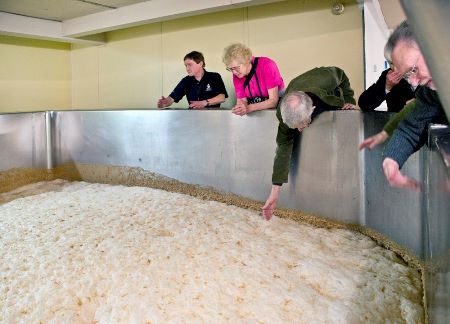 It was the end of the tour but not the end of the fun. Tokens that had been secreted in pockets and handbags could now be exchanged for a pint, or three 1/3 of a pint samples of the breweries produce. Exchange took place at the bar of the restaurant that is part of the Visitor Centre.

Although Unicorn Brewery is huge, by travelling through the building and learning of the history of six generations of the Robinson family you can obtain some idea of the passion of the people involved. They kept the redevelopment in the same building and modernized with no consequent loss of jobs.

Thanks are due to Judith for organizing this eye-opener of a tour.

With due acknowledgement to Arthur Procter & David Burridge for the supply of photographs for this report.

Morph Studio Video : "We were asked to produce a film for the launch of the new multi million pound Robinsons Brewery and Visitor Centre. The aim of the film is to chart the 175 year history of the Robinsons family brewing business in Stockport. As part of the new Brewery Tour the film is around 18 minutes long and combines old photographs with new footage of the brewery and interviews with family members.

Temperance movement in the United Kingdom