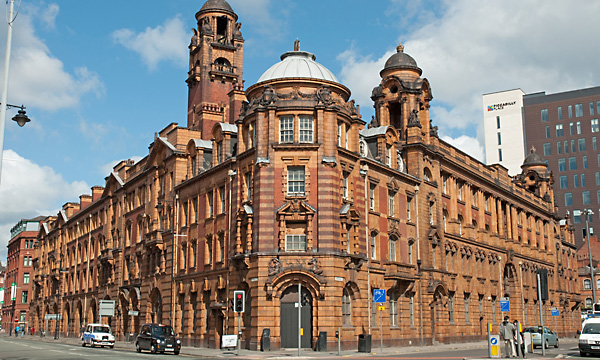 Standing at the junction of London Road and Whitworth Street, the building has been largely empty since 1986, gradually deteriorating. It has been a Grade II* listed building since 1974 but that did little to save it. From this prime position it stared reproachfully at every one of the thousands arriving at Piccadilly each day. After years of inaction Manchester finally got tough with the owners. It has now been sold on to another company, Allied London, who will start development in the spring. That left a small window of opportunity for those enthusiastic nerds who wanted to see the interior of an iconic Edwardian building. Jonathan Schofield, 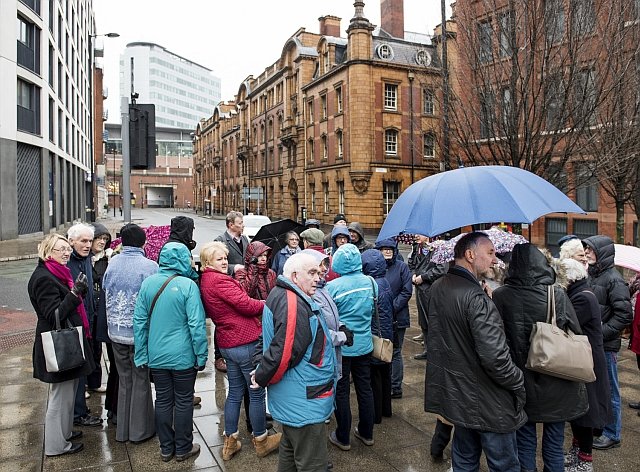 our favourite Blue Badge Guide, leapt in to fill the gap. As well as a series of public tours over the Christmas/New Year period he agreed to put on a special tour for Marple History. Despite the short notice, Hilary Atkinson took up the challenge and assembled 40 like-minded anoraks to accompany her. It’s fortunate that they were anoraks as we were greeted with the traditional Manchester weather.

The building itself says a lot about the Manchester of that period - a time when the city had world status and with ambitions to match. It cost £140,000, about 20 % over budget, but that did not worry the good burghers of Manchester unduly; they could afford it. It was unfortunate and not very businesslike but they had a fire station to be proud of. It was built in an architectural style that Manchester had made its own – Edwardian Imperial Baroque. The Town Hall, opened in 1877, was a magnificent building but within a generation the atmosphere had turned the grey Spinkwell sandstone black, even though it had been chosen as particularly resistant to atmospheric pollution.

Local architects rose to the challenge and began to use glazed brick and terracotta. The advantage was that the dirt and grime could be washed off easily. The Fire Brigade took notice of this and they would regularly direct their hoses at the new headquarters until it gleamed. Whitworth Street itself is probably the finest example anywhere in the country of this style of architecture with the Fire Station at one end and the Palace Theatre at the other. As well as new and unconventional materials, the exuberant style accommodated statues and mouldings and a variety of intricate decoration. The architects, Woodhouse, Willoughby and Langham, worked with John Jarvis Millson, the sculptor, to create “The finest fire station in this round world.” The exterior is full of symbolism. Millson had a penchant for half-naked ladies but he also used half-naked men and completely naked animals to symbolise concepts such as Fire and Water, Night and Day, Justice Courage and Strength.

We began our tour in the Gas Meter Testing Room. This was originally intended to be a public library but there was a great problem with gas appliances at the time so civic responsibility changed the use to a free testing facility for homes and businesses. Then we moved into the superb spaces around the main courtyard. This was the area where firemen trained to the necessary level of proficiency (very high), taking account of the prevailing Health and Safety regulations (non-existent.) For many years it was the only specialist training facility in the country and men came from all over the country and the Empire.

The Engine Room was the focus of the whole enterprise. Originally designed for horse-drawn appliances, the attention to detail was impressive down to the runnels in the floor to dispose of the horse urine. Now just a shadow of its former self, this was where the appliances were kept and from where the firemen would be scrambled to emergencies. The fire poles are still there, though no longer polished and gleaming. Modes of descent were revealed, including head first, and playing a bugle. Only one is missing. It was removed by the fire chief on the last day of occupancy in 1984 and used to make souvenirs. The local small boys, who hung around the massive doorways, waiting for the excitement of an alarm, would no doubt have snapped up such souvenirs if they had been given half the chance.

The final port of call 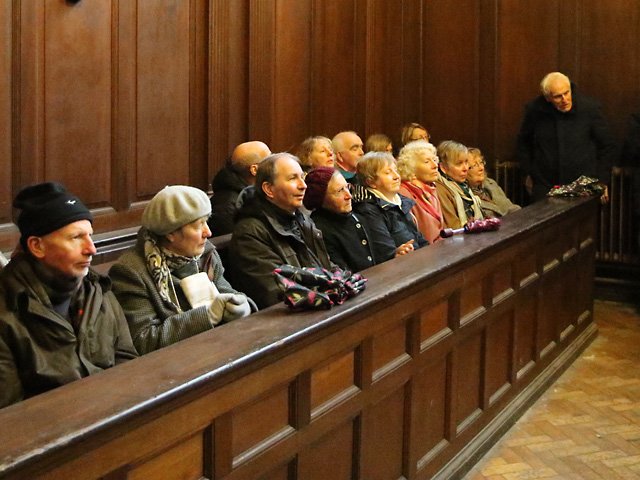 was the Coroner’s Court, closed in 1998, a celebration in mahogany and stained glass. It was humanized somewhat by names, carved by bored court reporters, in the tops of the desks at which they sat. The court’s future is undecided. It could be ripped out, it could become a trendy wine bar or it could be left as it is and used as a film set. Over Christmas it starred in the BBC’s Agatha Christie “Witness for the Prosecution”. Let us hope many more film production companies will use it. Whilst on the subject, Agatha Christie got another mention as Jonathan described how Miss Marple got her name.

This was a fascinating tour and the last chance to see the building as it has been for more than a century. The next time any of us visit, it will have been transformed but that is all to the good. Buildings such as this should not be preserved in aspic; they must evolve to suit the society in which they find themselves. But in turn, that society must preserve and safeguard the key features of the building for future generations to admire.

Further reading: Friends of London Road Fire Station, Development of the Buiding, View From The North Below the gallery, a video of memories of the fire station, from 2015.

On the Way to Court