With three walks to come, the Festival of Evening Strolls started for the Society, with this story of three churches in one. The bolt-on, to the Society’s season, that proved so successful last year, has been re-energized, by popular demand. Future visits to Glossop and Bugsworth Basin lay in store, as Monday 15th May dawned, the date of the first walk, the day of delving into the history of All Saint’s. Would the weather co-operate on the first summer outing? Would it heck! Rain, rain and more rain, water may have led to developmen t of industry in the area, but rain was unwelcome this day. Nevertheless a goodly crowd of 25 plus our guide for the evening Hilary Atkinson gathered and hid from the rain in the entrance vestibule of the West Door, kindly opened by David Waterson, Church Administrator.

After the preliminaries, we moved out, bravely, into the churchyard, crossing over to the footprint of the two lost churches, which lies behind the bell tower. Waterproof trousers were the fashion statement of the evening, with cagoules to the fore with a sprinkling of wellies. Hilary’s sisters Christine & Lynda handled, with deft skill, the folders of laminated photos showing them to the attentive hoard, as Hilary led us through the history of the wet grass beneath our feet, with Neil gallantly holding an umbrella to protect Hilary and her notes.

In 1588, the first recorded service took place on this site, in a timber-framed building. By 1803 the condition of this was such, that a new church was proposed. Completed in 1811, to the design of Robert Goldsmith, the cost was £4,000, a spend of £260,000 today. A major part of the cost was borne by Samuel Oldknow. Sixty years later, the congregation having grown too large for this second church, it was decided to build another church. Positioned some 30 metres to the south of the previous churches’ position, the church was erected at a cost of £6,056 (today £540,000), and consecrated on 30th June 1880. In the following years some services were still held in the Oldknow church, but gradually these stopped and the building was used only for storage. It was demolished in 1964. 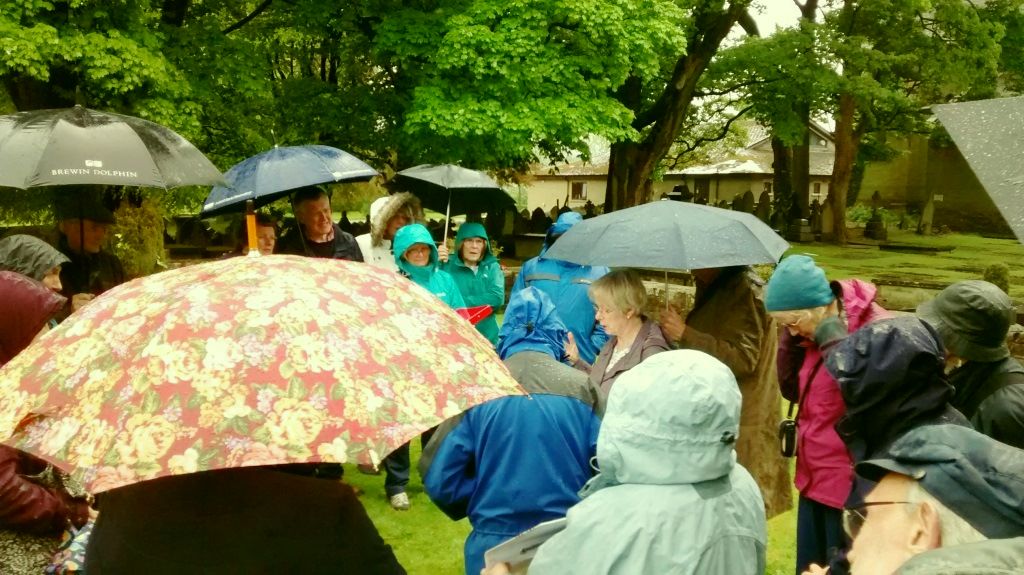 From this area of lost churches we moved en-masse into the graveyard, to explore the stories that lay behind the names and dates that had been chiselled into stone. The stories of the corpulent attorney, a free-mason, whose wife died the same day as him, of a ‘broken heart’, of Sarah Foster and the loss of the Royal Charter, of William Hyde, sexton of All Saints Church, Marple for 42 years until his death in 1865, and more. The degree and skill of Hilary’s research was self-evident. History unfolded from a name and date.

Seeking some shelter from the persistent precipitation, sanctuary was reached in the Bell Tower. Despite being a long May evening, the leaden grey sky ensured that a torch was needed to pierce the gloom within the tower. A tower that house bells and memorials, some of which have in the past generated less than generous comments from Pevsner, as were his comments on the church across the valley of lost industries, St. Thomas’s of Mellor, atop another hill. 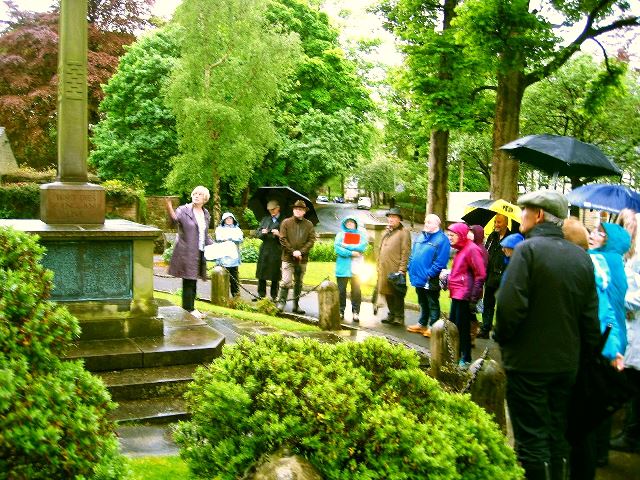 We sauntered over, under brightening skies, to the war memorial. This comprises of a stone Celtic cross set on a stepped base. Cast metal plates on the base name those of Marple who fell in the First World War, some 110 names. Of note is that the population in 1911 of the town was 6,483, a century later the population was 23,686, a comparative figure of losses would be in the region of 400+.

The evening drew to close with a brief visit inside the Victorian church where Hilary gave a short introduction to facets of the interior. Hilary had guided us on an exploration of the church history, and of some of those who had been laid to rest in church grounds.

Our thanks must go to Hilary for the successful evening, despite the vagaries of our temperate climate, and in appreciation of her fruitful research.

The evening raised £79 for the Eve Appeal, Hilary’s nominated charity.