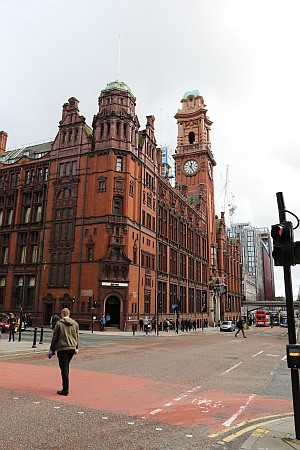 A Friendly Society founded in 1858 by James Proctor and George Robins in Dukinfield, it provided insurance products to the working classes. It became The Refuge Assurance Company in 1881 and, looking to relocate its Head Office from Corporation Street in 1890, a site on the corner of Whitworth Street and Oxford Street was chosen. Alfred Waterhouse, the architect of Manchester Town Hall was appointed. Waterhouse’s original building was extended in the period 1910 - 1912 by his son Paul and further extended in the 1930s. It is formed by three distinct buildings all connected to each other, including the famous clock tower. It is one of the finest terracotta buildings in Manchester. Built of imperishable pressed red brick, deep brown and buff terracotta and grey granite. It is ornate, with Baroque features and the letters R A are repeated again and again both on the inside and outside of the building.

We followed Jonathan across Oxford Street, in the rain, to look at the building’s exterior and marvel at the impact of the design and the contrasting colours of the terracotta and stone. Not only decorative, but easy to keep clean as any dirt is easily washed off. Very suitable for the Manchester of the Edwardian period. The richly textured side blocks present a powerful effect set against the massive clock tower, with its pilastered and banded decoration and Baroque cupula. 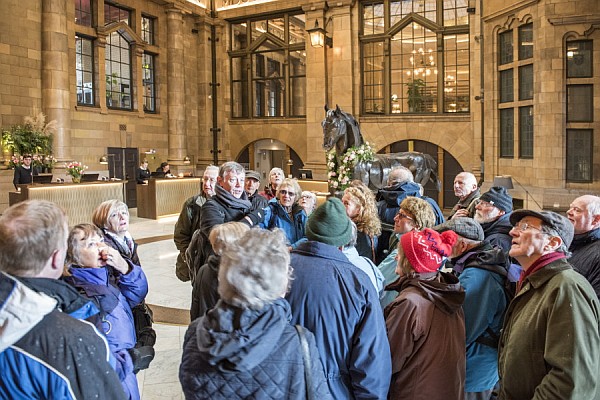 We entered through the main entrance, at the base of the tower where a single storey 3 bay porte-cochère of white granite leads into an enclosed forecourt surrounded by massive arcades and colonnades in glazed, buff coloured terracotta made by Burmantofts Pottery of Leeds. Originally open to the elements, this area was eventually enclosed with a beautiful glass dome. The space now forms the hotel’s reception and is dominated by a statue of a black horse. Originally, the War Memorial stood here, recording the 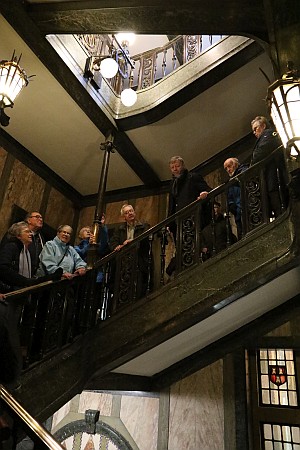 names of employees who lost their lives during the World Wars. In 1978 The Refuge moved to new headquarters in Wilmslow and the Memorial was relocated at the same time.

From reception, we walked down several flights of stairs and stopped in an open area outside the ballroom – yes, ballroom! Many years ago, dances were held there for the Refuge staff. Apparently, employees were discouraged from socialising in the local theatres and pubs. From here we walked along a corridor to a small room at the end that contains the original safes where important policy documents were kept for safekeeping.

We retraced our journey back to reception and were led into the original post room where a pneumatic system sent tubes around the building, delivered letters and other paperwork to different departments. One of our members, Christine Julier, recalled visiting the Refuge Building in the 1960s, on a school trip, and being allowed to send the tubes around the system.

On the Directors' private staircase

Another highlight of the visit was ascending what had been the directors’ private staircase made from Carrara marble and richly decorated with elaborate bronze work and stained glass windows incorporating the coat of arms of Manchester. The R A initials are everywhere as are images of bees, another symbol of ‘industrial’ Manchester. The directors’ Board Room remains unchanged, panelled and decorated in the Baroque Style. In another corridor close by, are more safes that were used to store money.

Finally, we descended another staircase and our tour ended in the bar and dining room area, which includes more terracotta, columns and Art Déco features. Several members took the opportunity to relax, have a drink and enjoy the splendour of the room.

Once again, Jonathan had shared his enthusiasm for Manchester with us.

The mob enter the destination

Dome and horse in reception

The horse in the reception area

Awe & Wonder on the Directors' staircase

Close up of stained glass

Light fitting and mirror in corridor

An attentive audience with ears pricked

Jonathon speaks in the lobby 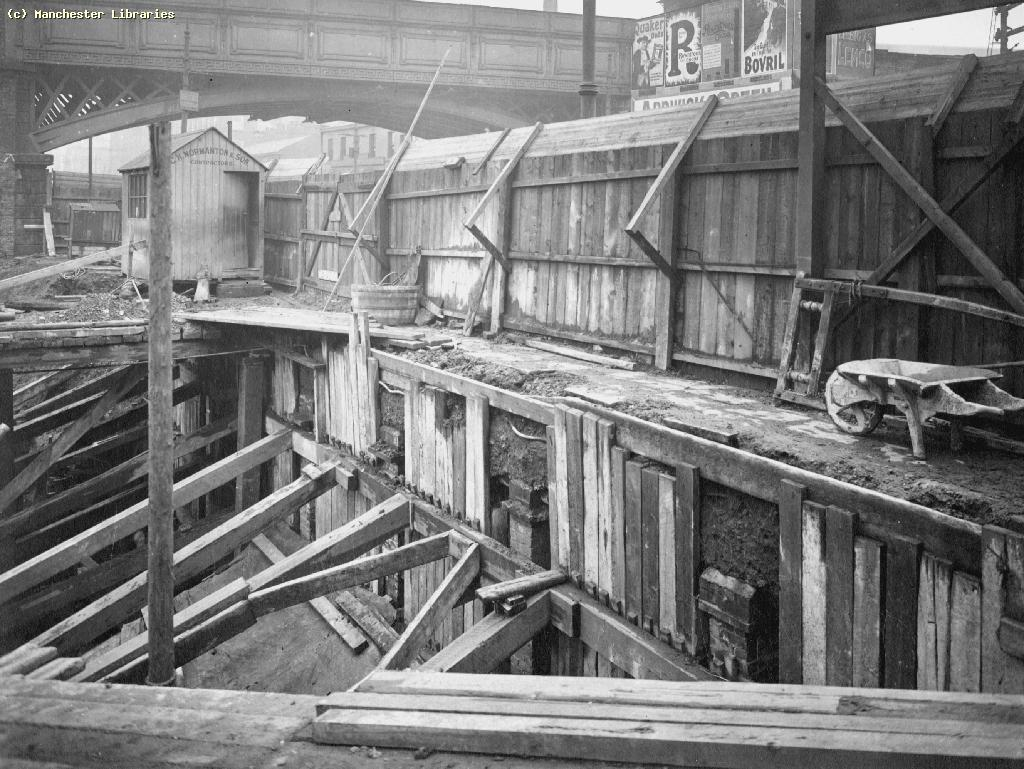 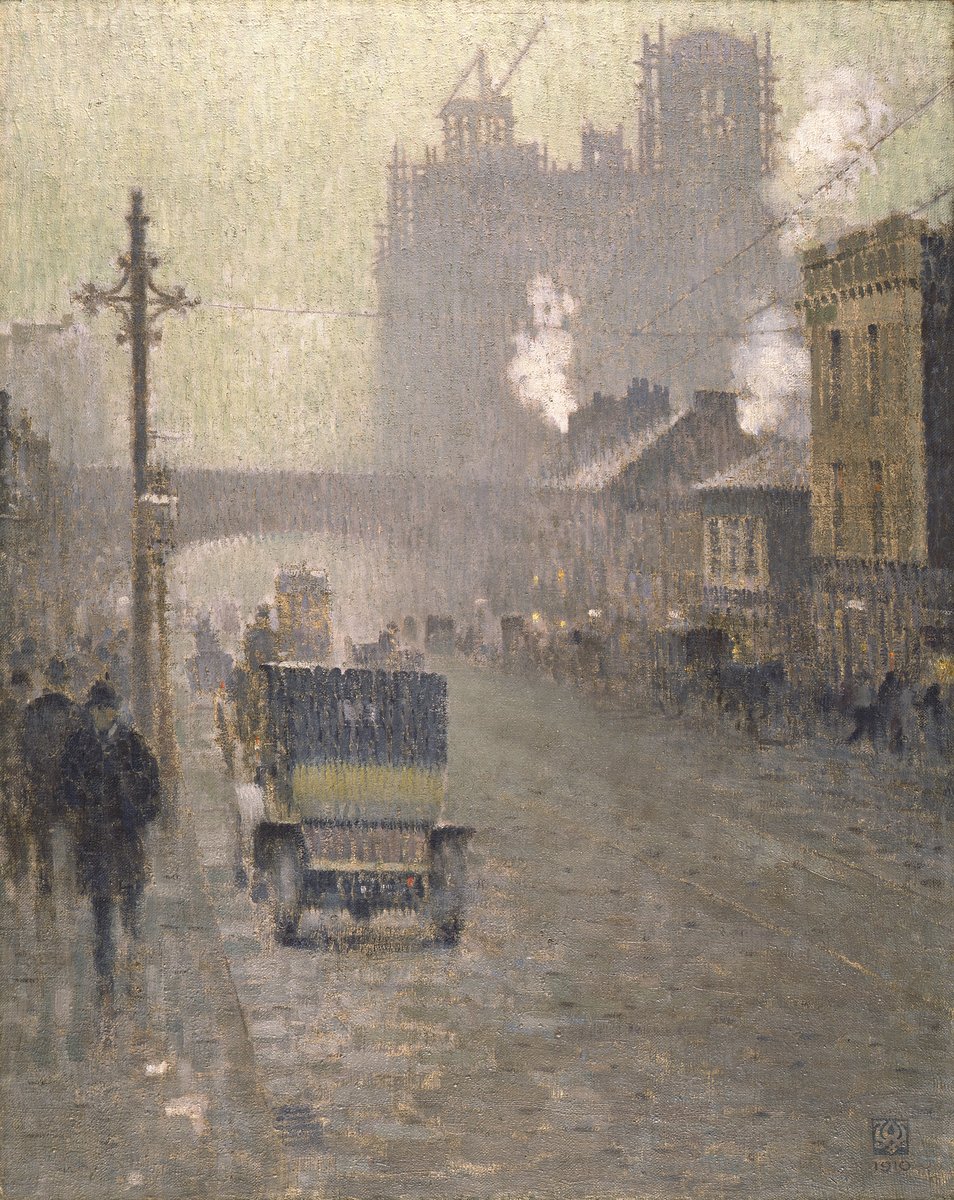 Industrial Manchester is a collection of paintings by Adolphe Valette (1876–1942) displayed at Manchester Art Gallery. The artist's impressionist style perfectly captures the atmosphere and character of the city at that time. Each painting has a scene of Manchester depicting its canals draped in a smog-filled haze over the lights and ironwork of the city. View our collection of featured prints, or buy art prints and framed prints custom-made to suit your taste.