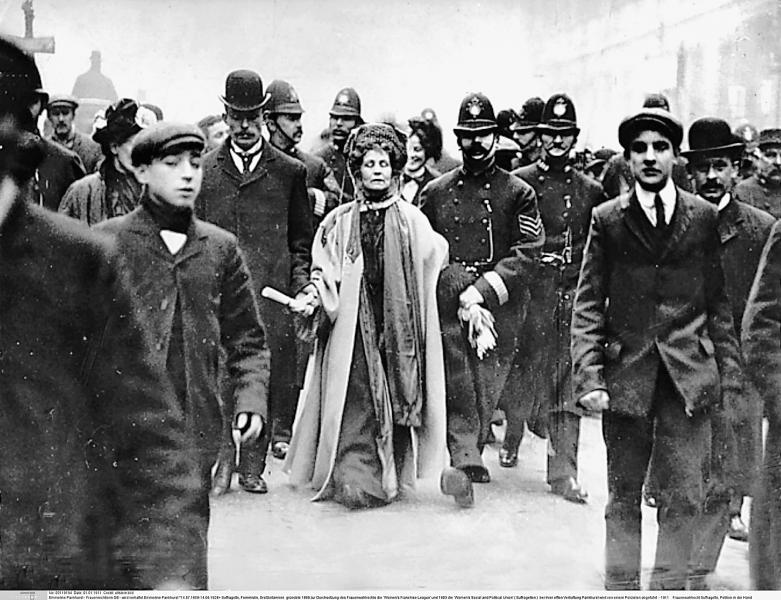 In November 2021, Manchester City Councillor Andrew Simcock came to speak to the Society about how he arranged for a bronze statue of suffragette Emmeline Pankhurst to be made and placed in St Peter’s Square Manchester in 2018. Following the talk many people wanted to go to Manchester to see the statue. We suggested that Andrew himself might guide us, but he felt that Blue Badge Guide Jonathan Schofield would do a better job, and so it was that on the afternoon of Tuesday 5th April 2022, 16 of us met with Jonathan at the ‘Meeting Circle’ in which the bronze ‘Mrs Pankhurst’ stands.

We were soon joined by Andrew who reminded us of what he had told us in November about the complicated process of arranging for installation of a new statue, including safety features like standing a slightly larger than life size Mrs Pankhurst on a higher than average kitchen chair to ensure that her outstretched arm misses the heads of all but the tallest passers-by, and that the arm is strong enough if someone decides to take a swing on it. 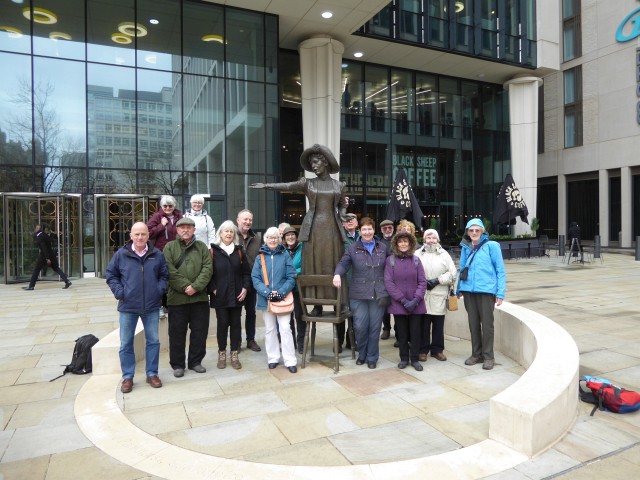 The ‘Meeting Circle’ was unveiled on Sunday 15th July 2018, which would have been Emmeline Pankhurst’s 160th birthday. It is carefully aligned so that its entrance faces that icon of working class struggle, the Free Trade Hall, and has the inscription ‘DEEDS NOT WORDS, RISE UP WOMEN, EMMELINE PANKHURST 1858-1928’, carved around its inner border. ‘Deeds not Words’ was the slogan of the Women’s Social and Political Union (the Suffragettes) which contrasted with the more moderate women’s organisations which existed at that time. The bronze statue arrived on Thursday 13th December 2018, to be unveiled the following day in front of a large crowd in St Peter’s Square. 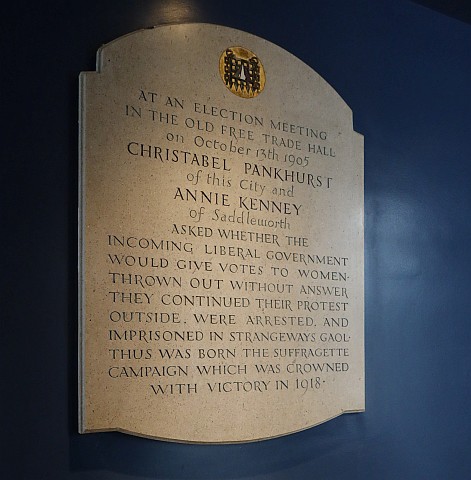 After a few minutes admiring the statue, we went to the Art Gallery for a view along Princess Street towards the Mechanics Institute, established in 1824 to teach artisans the basics of science by part time study, so the beginning of adult education. Later it was where the TUC held its first meeting in 1868. Then back across St Peter’s Square and round the side of the Central Reference Library to Peter Street and into the Free Trade Hall, partly to escape the rather cold wind, but mainly to see a plaque commemorating Christabel Pankhurst, daughter of Emmeline, and Annie Kenney, a cotton mill worker, both pioneers of the women’s suffrage movement. This commemorates an important event as it was the first occasion that any suffragette was arrested and imprisoned for causing a disturbance.

Across the street we could see where the Gaiety Theatre had stood until 1937. This was the brainchild of Annie Horniman, a pioneering woman of a very different kind. She was born in 1860 into the famous tea family, and had a very strict and sheltered upbringing. As a young woman, she fell in love with the theatre, and being wealthy (from the tea), she bought the Gaiety Theatre in Peter Street in 1908 and turned it into a repertory theatre, providing a platform for the work of significant playwrights like George Bernard Shaw, Stanley Horton, Harold Brighouse and Allan Monkhouse in the north of England in the early years of the 20th Century.

From Peter Street it is a short walk to Deansgate and John Rylands Library, the Grade 1 architectural gem of red sandstone, designed by Basil Champneys and commissioned by Enriqueta Augustina Rylands (1843-1908) as a memorial to her husband, John, who had died in 1888. He had 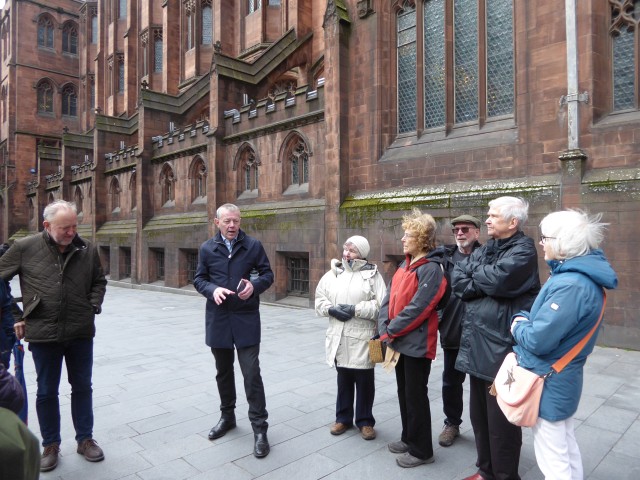 been a very successful textile manufacturer, and was consequently very wealthy, but was a philanthropist who supported many charitable causes in the city, and whose investment in the Manchester Ship saved the scheme from collapse. He collected theological books, and Mrs Rylands intended the library as a repository for his collection, later adding two more collections of rare books, to make it a leading scholarly library in this country. She was absolutely determined that every detail should be exactly what she intended. It took ten years to complete and she supervised every aspect. It was opened to the public at the beginning of 1900.

Around the side of the library we went briefly into the narrow alley of Wood Street where the Manchester and Salford Street Children’s Mission established its headquarters in 1873, having been started elsewhere in 1869 by Alfred Alsop and others, to attend to the needs of children living on the streets. The charity is still in existence, but nowadays we mostly hear of its appeals for toys and other essentials for needy children around Christmas time. Adjacent is an associated building of 1905 inscribed ‘Working Men’s Church’.

We now crossed into St Ann’s Square, an area of Manchester known originally as Acres Field, where an annual fair had been held in the heart of the medieval town from early times. In the 18th Century it developed as a select residential area lined with fashionable town houses and was an up and coming part of the town. For many centuries the Mosley family had been Lords of the manor of Manchester and the lordship passed to an heiress, Lady Ann Bland née Mosley (1662-1734). She founded the church in 1708 as a simpler alternative to the collegiate church (now Manchester Cathedral) down the road. The church is built of purple-red Collyhurst sandstone, much patched by subsequent repairs, severe in appearance and with a rather blunt west tower. When built this was surmounted by a three-stage cupola, but it was removed in 1800 and replaced by the balusters we have today. 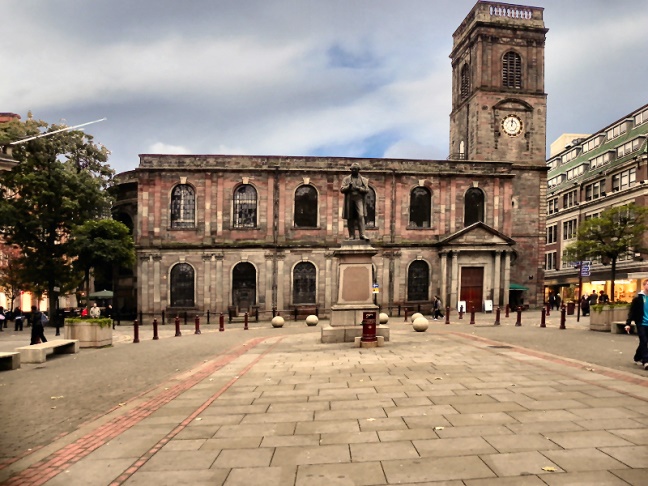 Here our visit ended with Jonathan still giving us his unstoppable stream of fascinating facts, assisted by Andrew who added much about the many pioneering Manchester women who have shaped the history of Manchester, and which one can read more about in his book ‘First in the Fight’ which tells the story behind the statue.