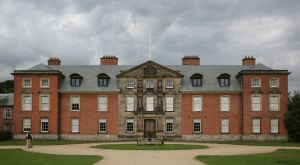 Once upon a time, on a dark November evening, the folk of Marple, scanned their calendars, and diaries. And perhaps, they thought, ‘Dunham Massey?’ at the History Society tonight.  Been there, been round, been for a scone and a pot of tea, and left with the T-shirt. What more can I learn? If the decision was made to put their feet up for that evening, and give Peter's memorable talk a miss, what a treat they missed ! Peter Braun visited the Society that night, to deliver an entertaining and memorable talk on the National Trust property of Dunham Massey Hall and Gardens. Peter gave us a virtual tour of the house, both interior and exterior with his illustrated talk. Using this aid, Peter wove a fascinating story of the house and those families associated with the same.

The house, which has been a National Trust property since 1976, had its origins in the in 1611, when it was built by Sir George Booth, though the chapel has records going back to 1307.  Over a period of eight years from 1722 the house was remodelled, by John Norris for George, Earl of Stamford and Warrington. Early in the 20th-century alterations were made Joseph Compton Hall between 1905 and 1908. Prior to this, though the house was empty for nearly 50 years, at the latter end of the 19th-century, work was carried out towards the end of the 18th-century by John Hope. The hall itself, the stables, and the carriage house of Dunham Massey are all Grade 1 listed buildings. The site is moated and also has a deer park.

Two families have had their history entwined with that of the Hall, the Booths and the Greys.  The Booth family held Dunham Massey for over three hundred years, from the early fifteenth century until the mid-eighteenth century, when they were succeeded by the Greys, Earls of Stamford. The Booth family acquired the manor of Barton on Irwell in Lancashire towards the end of the thirteenth century. The family produced a number of churchmen in the fifteenth and sixteenth centuries, including two bishops, of Exeter and Hereford, and numerous archdeacons and rectors, besides the two archbishops of York. The Greys continued to own Dunham Massey until the death of the 10th and last Earl of Stamford in 1976. Peter, using the portraits from the hall, as a starting point, gave us an encyclopaedic but enthralling discourse on the history of the two families. One gem was that 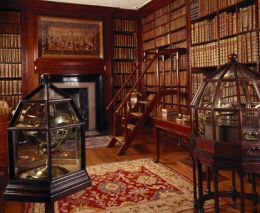 the Greys could trace their family tree back to Lady Jane Grey, the ‘Nine-day Queen’. The estate, the house, all of its contents and the 3000 acre of land was bequeathed to the National Trust by the Roger Grey, 10th Earl of Stamford on his death.

To hear the full story involving the 8th Earl, in the nineteenth century. The goings on in South Africa, the treatment of his third wife, Martha Solomon, the daughter of a black Cape slave, dis-owned, and their son John Grey, denied his title, you will have to go along to one of Peter’s talks, please do.