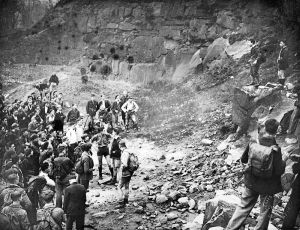 Keith Warrender in October 2013 will bring us us the story of the occasion when Bowden Bridge Quarry, Hayfield, saw the start of a mass trespass, that marked the start of the campaign for freer access to the countryside which culminated in the Countryside and Rights of Way Act 2000. 400 people participated in the trespass onto Kinder Scout, a bleak moorland plateau, the highest terrain in the Peak District. As the trespassers scrambled towards the Kinder Plateau they came face to face with the Duke of Devonshire's gamekeepers. Scuffles ensued, as the result of which five men from Manchester were jailed including the leader Benny Rothman.