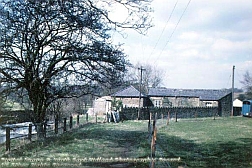 Ollersett Waterworks, was the subject of March's talk given by Derek Brumhead, a look at the development of one of the essential supplies of modern life. Derek gave a stimulating talk on the work that began with an Act of Parliament by George W. Newton in 1831, enabling him to supply water to his farms and part of New Mills. Derek then took us through a journey to new springs,new owners, development, and through to the present day. In doing so, the members came to realize that they really must keep their eyes open more on their travels around New Mills, to be more aware of the industrial history to still be seen around them.

By 1831, cotton and paper mills, calico printworks, engraving works, chemical and bleachworks were in operation along the valleys of the Sett and Goyt. Farms, houses and factories were in need of a piped supply. In 1831 George W Newton, a magistrate of Ollerset who had inherited the Aspenshaw and Ollersett,estates, obtained a private Act of Parliament to supply his farms and parts of New Mills with water. 'Powerful and a constant springs of water', said the Act, were present on Ollersett Moor. Accompanying the Act was the first large scale map (1830) of the district which contains important information on the layout and growth of New Mills.

A large circular reservoir (Fig left) was built on Ollersett Moor on the site of a spring and pipe took water to a main reservoir at Low Leighton. From here, another pipe took unfiltered water down to the Sett valley and up into the town, for distribution along the main roads. The Low Leighton reservoir was just below 600 feet, high enough to supply most parts of the town by gravity.

In 1888, a new spring suddenly appeared in a mine tunnel at Gowhole. A pipe was laid from the tunnel exit to Goytside where a water ram was installed in a small square stone building still standing by the riverside. From here the Gowhole water was pumped up to a new reservoir at Ball Beard.

The Ollersett Waterworks supplied water to New Mills throughout the nineteenth century, remaining in private hands. In 1907, it was purchased by the New Mills Urban District Council for £11,000 under an Act of Parliament which also authorised expenditure on extensions to the waterworks and gasworks. A filter house was built at Low Leighton and a booster pump, sited adjacent to St Mary's church, provided the Eaves Knoll district, which was too high to be supplied by gravity.

In the early 1950s, the town council decided to obtain water from Stockport's supply at Kinder. The Ball Beard reservoir was covered and relined (Fig) and then received its filtered supply from the 27 inch Kinder main. The Gowho1e supply was disconnected and the Ollersett and Low Leighton reservoirs filled in. Stockport Corporation took charge of the water supply, succeeded in 1974 by North West Water and later by United Utilities. Today, the only part of the original Ollersett Waterworks,still in use is the reservoir at Ball Beard. The Kinder water is now sent to a treatment plant at Disley before being sent back to Ball Beard.

All photographs by kind permission of and copyright Derek Brumhead