Mill Brow
An amazing postcard of Mill Brow with a faded ghostly image showing how it got its name.

Marple and Mellor - A textile tale

Judith has always given us interesting talks but this time she tried something different. Rather than give a detailed analysis of a single topic, she elected to give a broad overview of the rise, the dominance and then the slow decline of the textile industry in north west England. In the process she demonstrated how Marple and Mellor fitted into that history. An ambitious tour de force!

She started locally by showing o 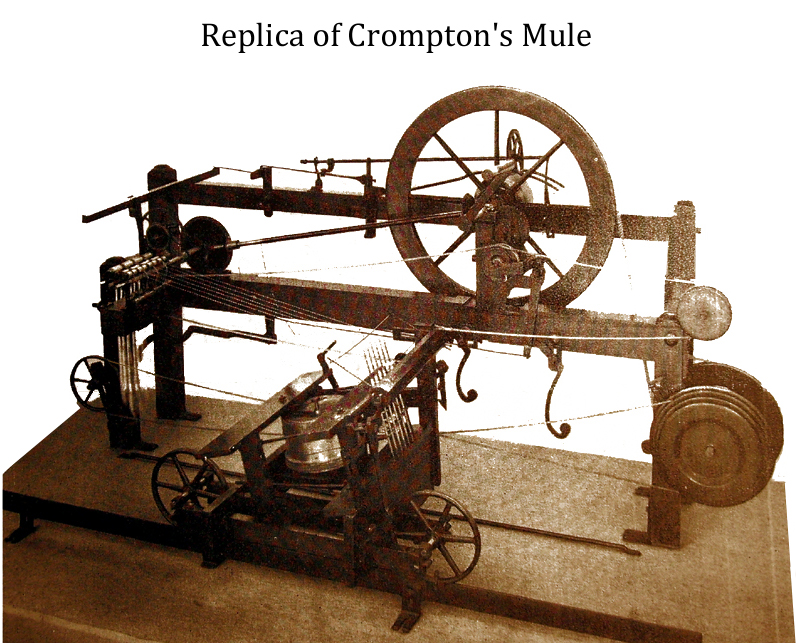 ur river system with fast flowing tributaries feeding into the Goyt. These provided a plentiful source of power for small cottage industries, often centred around wool and flax. All along the western slopes of the Pennines, fulling mills were established to use the plentiful supply of water power and to supplement the incomes of people farming marginal land.

As cotton came into prominence with supplies from India and the New World, the textile skills of the local people found a new outlet and this was assisted by the technological innovations of inventors in the region. Judith gave us a roll call of these pioneers, accompanied by a brief biography. John Kay (flying shuttle), James Hargreaves (spinning jenny), Richard Arkwright (water frame), Samuel Crompton (spinning mule.) Not only biographies but some excursions into etymology - spinster is an unmarried female still living at home; Jenny is short for engine; factory - an abbreviation of manufacture. The mule was so called because it was a cross between the jenny and the water frame in the same way that a mule is a cross between a horse and a donkey.

So, where were Marple and Mellor in this industrial progress? With the advent of Samuel Oldknow, that’s where. One of the self-confessed loves of her life, Judith gave full prominence to our local hero. There were already a number of small mills on the Mellor side of the Goyt, using the pow er of Mill Brook and Mellor Brook but Oldknow was a pioneer of large scale industry. He had made a fortune from muslin but now he ventured into spinning cotton, developing the factory ideas pioneered by Richard Arkwright, a family friend. Oldknow used the Goyt to power his mill, not the smaller tributaries, and he was a leader in the social changes brought about by the factory system. Building houses for employees, employing orphans as apprentices and growing vegetables for sale to the workers. (right, Brick Row. Brick Row,Stone Row and Red Row were built by Oldknow for his workers.)

After Oldknow the emphasis of the cotton industry locally moved away from the fast flowing streams on the Mellor side. Steam was now the preferred power source because of its reliability though the Andrew family at Compstall Mill used both water power and steam, as did Oldknow’s successors at Mellor Mill. However, later mills such as Hollins Mill and Shepley Mill in Marple and Hawk Green were entirely dependent on steam.

Marple and Mellor were not just dependent on spinning. Some of the larger mills were combined spinning and weaving enterprises and there were other activities represented locally, particularly bleaching and printing. Finishing factories, as these activities were known, required clean water so they were usually situated in the upper reaches of rivers, above the other mills which often polluted the waters with their waste. This expla ins the location of such local factories as Strines Printworks and Holly Head Bleachworks, even the printing activities of Compstall Mill as that was able to use unpolluted tributaries of the Etherow.

The decline of the industry was slow but inevitable as Judith showed with her review of the last century. Goyt Mill, built in 1905, represented the final flourishing of the industry but for some it was already too late - Mellor Mill had burnt down in 1892 and was not rebuilt. Other mills closed over the years but some of the smaller ones survived by demonstrating their flexibility. Primrose Mill is a case in point as it changed its products to remain relevant to changing markets. It made gas mantles, products from synthetic textiles and even specialist rubber products but eventually it too had to close. The closure of Hollins Mill in 1956 really marked the end of this district’s association with the textile industry, an era that lasted for almost two hundred years. The tour related by Judith had come full circle. (above, Primrose Mill, on fire in 1961)

Intriguingly though, she made only a fleeting mention of our other local industrialist, William Radcliffe. A contemporary of Samuel Oldknow, in many ways he made a more lasting contribution to the industry than Oldknow with his patented improvements to the weaving process. Could it be that Judith is planning another talk, this time about Radcliffe rather than Oldknow?

Filmed in the Manchester Museum of Science and Industry. The spinning mule was invented by Samuel Crompton in 1779, but this is a later, self-acting version.

The end of a textile mill, Demolition of Dawn mill, Shaw, Lancashire