We knew something was going on when people started arriving for the meeting at seven o’clock. By the time the meeting started at 7.45 there were over 120 people in the hall, waiting in eager anticipation. So what was the attraction? Swizzels of course! Fortunately our speaker, Nici Matlow, had had the good sense to arrive early bearing gifts. Drumstick Lollies, Parma Violets, Fruity Pops, Banana Skids, Love Hearts, etc.etc. The audience sucked contentedly on their Fun Gums and waited for her to begin.

Nici started with the story of the company - how it started in London in 1928, how it grew in the pre-war years, how it moved to New Mills in 1940 to escape the bombing. (But did it? Come to our April meeting about the bombing of New Mills to find out if Swizzels escaped.) It was certainly an entrepreneurial story. Two families, the Matlows and the Dees, combined forces and gradually expanded their product range. Rainbow Drops were followed by Fizzers and then by Bettabars although there were hiccups on the way. Bettabars evolved from Butternuts – a chewy cereal bar which was before it’s time. If they had carried on it would have been competing with Kellogs. 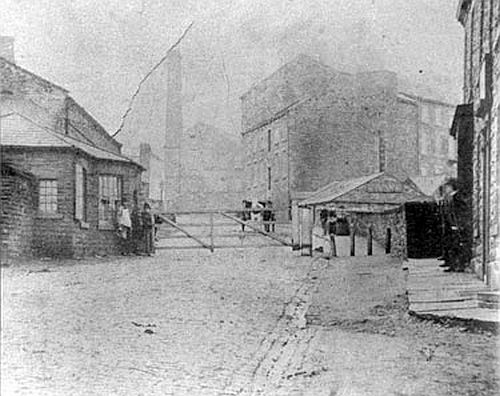 Brunswick Mill (Swizzels in 1940) in background on the right. Toll bar house on left with Hawthorn's Foundry behind.

The war presented both problems and opportunities for the company. Despite the restrictions on sugar it was allowed an allocation proportionate to its pre-war usage and it augmented this ration by taking over smaller rivals together with their sugar allowance. At the same time it had to do its bit for the war effort so its specialist machinery was used to make water purifying tablets,for the Ministry of Defence.

It was after the war that the real growth began. First there were Parma Violets, then Double Lollies and then the big one - Love Hearts. This brand is now over sixty years old but it has kept fresh and popular by continually evolving. Some of the standard messages “I love you”, “Hug Me” and “Will You” have stood the test of time whereas “Hey Daddio” and “Groovy” have fallen by the wayside. They are still keeping up with the times with messages such as “Tweet Me” and “Email me” and the latest introduction is a limited edition of emojis. No doubt if they do well they will become a fixture. One message that did not do well was “Drop Dead” short for “Drop Dead Gorgeous.” The intention was innocent but it was abused by young, newly married men giving them to their mothers-in-law. This slogan was rapidly withdrawn.

Nici regaled us with statistics. We are not talking hundreds or thousands here; we’re talking millions and billions; all rolling off the production lines each year. To make it easier to understand she converted some of the statistics into familiar units of measurements. Nearly three billion Love Hearts made last year – enough to go around the world one and a half times? Enough Rainbow Drops made in one year to fill 25 Olympic swimming pools. 1100 elephants weigh the same as a the amount of Chews made last year.

Over the years the company has innovated, sometimes deliberately, sometimes by accident. One of the family was playing with a production mixture and, by chance, created a new and interesting chew. A new packaging machine was developed by mimicking the action of the best packer in the company. At one time it developed Chocolate Eclairs and, Nici’s personal favourites, Chocolate Brazils. Unfortunately the sweet world divides into “Sugar companies” and “Chocolate companies” and never the twain shall meet. Swizzels’ attempts to bridge the divide were firmly repulsed by the wholesalers and the supermarkets. Nici might be a director but she couldn’t buck the market; Chocolate Brazils had to g 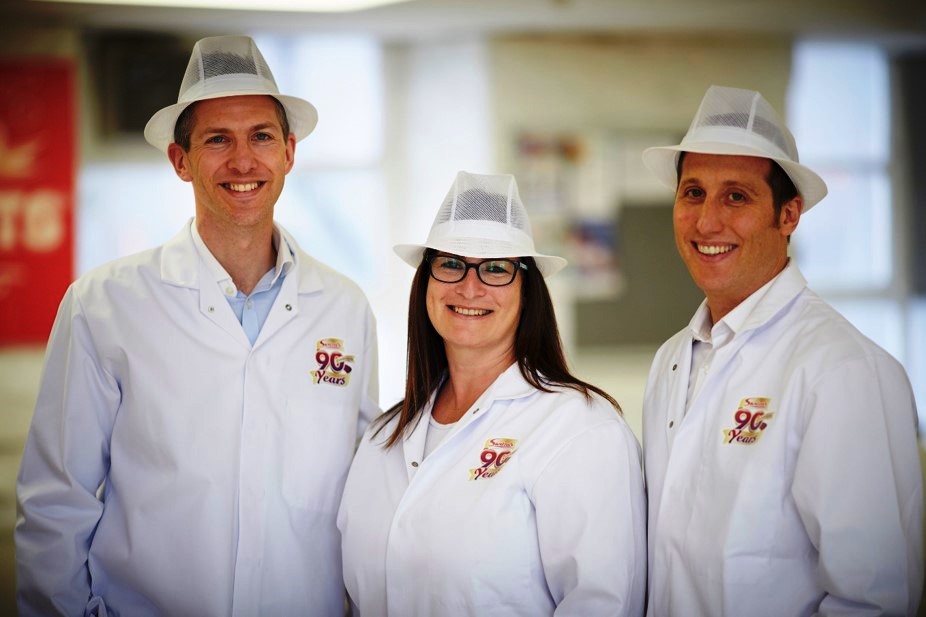 Despite these setbacks the company has expanded year by year and it now employs over 600 people in New Mills and hopes to hit a turnover of £100 million in the coming year. What really demonstrated its size came up by chance in question time. The company has four tankerloads of sugar delivered every day, five days a week. At 30 tonnes a load that is 600 tonnes, 85 tonnes every day as it works a seven day week. The next question was the obvious corollary. “In view of the present emphasis on healthy foods, how is the company adapting to change?” The answer was that it is changing but only so far as the market allows. It has eliminated all artificial colours a decade ago. It has moved towards vegetarian and vegan recipes and is experimenting with reduced sugar and sugar substitutes. However, its main market segment - children - is extremely conservative and change will be slow and gradual. The daily deliveries will carry on for a long time yet.

Nici gave us a fascinating talk and there was a lot for our record audience to chew over. And when they finished their Drumstick Chews they could adjourn to the reception area and turn their attention to the mince pies laid out to tempt them. A fitting end to a memorable talk.