Marple Bridge Past and Present

Marple Bridge Past and Present 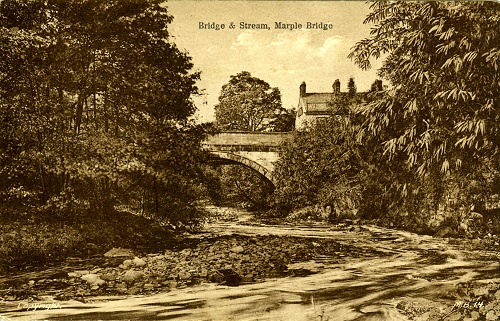 In 1993 an exhibition was held in the upstairs hall of the old Sunday School building on Town Street, now flats on the upper floors, with doctor’s and dentist’s surgeries on the ground floor, to celebrate the rebuilding of the river wall. The river wall had collapsed in 1991, leading to closure of Town Street for a year.

For centuries the area east of the River Goyt now called Marple Bridge was part of the township of Ludworth in the Hundred of the High Peak in the county of Derbyshire.

The land to the west of the river was called Low Marple, part of the township of Marple, in the Hundred of Macclesfield in the County of Cheshire.  Ludworth with Mellor was ‘moved’ to become part of the Urban District of Marple in Cheshire in boundary reorganisations in 1936.

Very little is known about early Ludworth, except that there was a corn mill at Mill Brow in the 1200s.  The local people kept adding to their land by “assarting” - that is making new fields by felling trees, clearing stones and fencing.  The early inhabitants lived in wood and thatch houses and scraped a living off the poor land.  They made some extra money with the sale of cloth made in the home, first of wool, linen and hemp, and much later cotton. 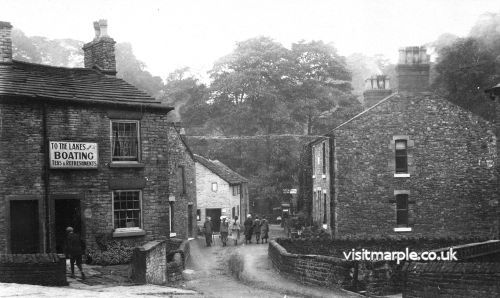 In Tudor times the population of the area doubled and more land was enclosed, it was needed to keep the increased number of sheep and cattle.  Stone walls were built at this time to surround the new fields.  There were 50 heads of households named on the Ludworth Hearth Tax return of 1670, which give a population of around 250.  A corn mill was built on the Marple side of the river in 1691, this was probably a replacement of an earlier mill, possibly being the manorial mill of Marple, mentioned in a document of 1354.  The mill remained working until the 1930s and was finally demolished in the 1960s.

(above: The entrance to Low Lea Road, off Town Street, Marple Bridge.)

The fast flowing River Goyt made a natural boundary to the counties of Derbyshire and Cheshire and for centuries was only crossed by fords.  There must certainly have been one or even two in the area of Marple Bridge.  We do not know when the first bridges were built.

Bridges were in existence at Otterspool (originally called Rohehoundsbrigg) and Compstall by 1619 when a survey of Macclesfield Forest was made.  The packhorse bridge at Windybottom was in existence by the early 1700s.  What is not known is whether these bridges replaced earlier constructions.

These bridges linked the packhorse tracks and primitive roads, leading from settlement to settlement.  One of the original ways to Glossop went up Hollins Lane to Mill Brow and via Gird Lane to Chisworth and Charlesworth.  Hollins Lane originally joined Town Street nearer Forge Bridge; the stream is the boundary between Ludworth and Mellor.  Lowerfold led to Compstall and via Cote Green Road to Chisworth; whilst Longhurst Lane wound its way up and over Cobden Edge to New Mills.  However, Longhurst Lane to the Royal Oak did not exist until 1807. 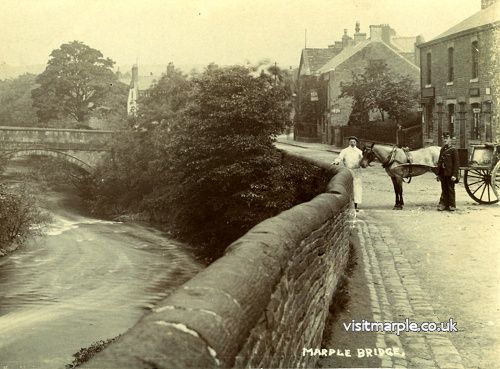 It is believed that the original route of Town Street did not go alongside the river but further back behind the houses; signs of what could have been the road still exist.  The route would probably have led behind the Norfolk and through James Square, and up Lower Fold.  The road from the ford or bridge over the Goyt would have led to Marple and onto Stockport and Disley.

In 1621 a survey was made of the bridges “in decay” in Cheshire and who ought to pay for their repair!  It recorded that: ‘One Cart Bridge’ (called Marple Bridge) ‘to be built by Cheshire and Derbyshire. This must mean that there was an earlier bridge, probably a pack horse bridge.  We know nothing about this earlier bridge.

The small settlement on the Ludworth side of the River Goyt became Marple Bridge – why not Ludworh Bridge?

The bridge suffered badly in the great frost of 1684 and had to be repaired.  By the 1790s the bridge was again in a ruinous state and eventually became too dangerous to use and a decision had to be made whether to repair or rebuild.  Whilst Derbyshire and Cheshire discussed the problem, Samuel Oldknow let the public use his newly built bridge, for a consideration of course!

“An accommodation to the public and to the travellers going from Stockport to Heyfield and New Mills.  This day will be opened a new road, over Marple New Bridge by Mellor Weaks, and to continue open till Marple Old Bridge is repaired and a more easy approach made thereto. N.B.A. Toll will be taken, as a small compensation for the great expense the above road has been to the proprietors, and for keeping the same in repair.”

The old bridge was demolished and a new one rebuilt in 1800 by Mr Samuel Lister and his brother, stonemasons of Yorkshire.  This bridge, widened downstream in 1930, still exists today. 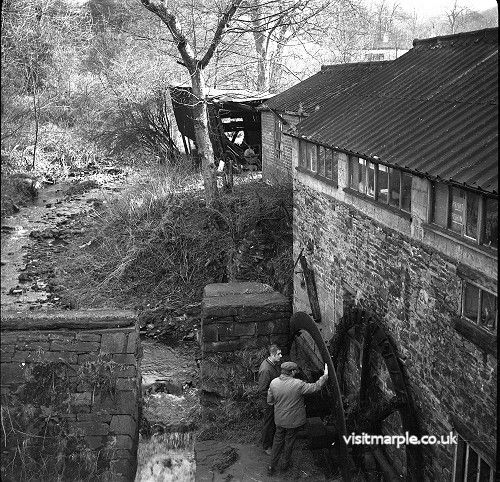 The Marple Bridge and Low Marple communities grew slowly over the years.  By the eighteenth century there was a corn mill on the Marple side of the river and the Forge Mill on the brook coming from Mill Brow.  It is not known how old the Forge Mill is, or for what purpose it was originally used, it could have been a fulling mill, but it was certainly being used to forge metal by the middle 1700s when it made pieces to repair the corn mill at Mill Brow.

The whole of the area was changed by the industrial revolution and the building of the cotton mills.   The very large Mellor Mill of Samuel Oldknow was built in 1792 and with the other factories being built in the district, the population rose rapidly.  The roads needed to be improved for the movement of cotton, coal, stone and finished goods.  The bridges had to be strengthened, repaired and rebuilt.  Longhurst Lane was turnpiked (toll road) as part of the Chapel-En-Le-Frith to Enterclough Bridge in 1792, with a toll bar on the site of the car park at the junction of Hollins Lane and Longhurst Lane.  A road from Stockport to New Mills with a branch to Marple Bridge was turnpiked in 1801.  The Glossop to Marple Bridge Turnpike Act was passed in 1802.

Then Marple Bridge really took off! 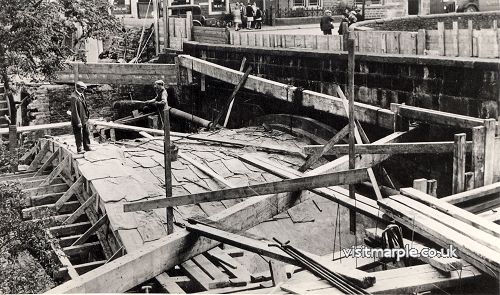 The bridge, although still strong enough for use today, eventually proved too narrow for the vast increase in traffic, especially the arrival of the motor vehicle.  There had been numerous bad accidents because of the steepness and curve of Brabyns Brow.  At the end of the 1920s it was decided to remove the dangerous bend in Brabyns Brow, by the demolition of Dr Hibbert’s house.  At the same time the bridge was widened on the downstream side, approximately doubling its width, this allowed pavements on each side.  This involved the removal of the two cottages closest to the river on the Low Marple bank and the demolition of the Horse Shoe Inn on the Ludworth side.

(above: Marple Bridge during widening c1930.)

In the nineteenth century Marple Bridge was a developing community with many shops, public houses and small businesses.  A small cotton spinning mill operated behind shops on Town Street, working around the turn of the eighteenth century.  It was probably filled with hand operated jennies. The Forge Mill continued to work throughout the century. It made and repaired coal mine and mill equipment.  For nearly a century there was a small tin plate works, operated by the Buck Family, in Marple Bridge. It was situated near the beginning of Lea Road and closed around 1939. The building was latterly used by a waste paper firm.

Coal, though not of very good quality, has been extracted from the area for centuries.  A coal mine opened in 1873 in Marple Bridge with its pit head behind the brick cottages at the start of Longhurst Lane.  The workings extended under Town Street and the river up to Cataract Bridge, the mine only survived twenty five years.  It was owned and operated by the Marple brickmaking and lime burning company of J and M Tymm.  There were also mines at Rose Brow and Edwards Lane, Ludworth; the whole of the Compstall Road area, and portions of Brabyns Park have been mined.

The census of 1851 was the first census in which birth place was recorded. 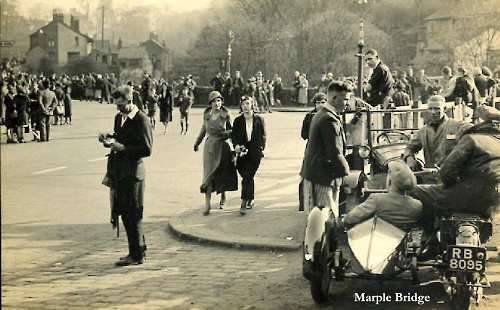 With the coming of the railway (and before to a limited extent by canal and road) thousands of visitors poured into Marple Bridge on their way to local beauty spots, on works outings, Sunday School anniversaries, excursion trains etc.  Later many adults and children came to the area to recuperate in the “healthy air”. Local shops, farms and cottages took to selling hot water, teas and flowers.  With the advent of the postcard in 1894 shops sold cards aswell as souvenir china to the visitors.  The public houses did a roaring trade especially on Saturday night when visitors and locals often caused a bit of bother!

The period between the first and second world wars saw many hikers marching through Town Street on their way to the hills.  This time also saw the building of weekend shacks, many up on the hillside off the Glossop Road.  This often led to letters to the local papers about “goings on”. Most of these shacks were pulled down just before the Second World War.  With the decline of Sunday Schools and works outings and the increase in car ownership, the number of visitors declined. 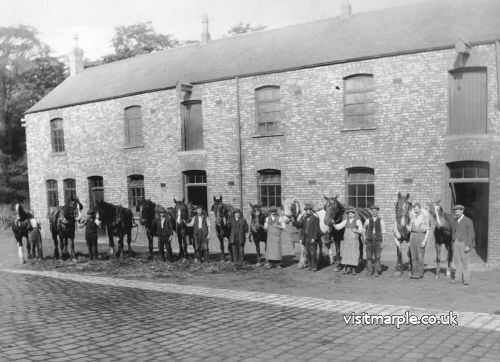 The Compstall Joint-Stock Provision Society was formed in 1851.  In 1889 a shop was rented in Marple Bridge for three years to see if expansion was justified.  Trade was so successful that it was obvious larger premises were needed and plans were drawn up for new purpose-built premises containing a shop, two cottages, boardroom, offices and a warehouse.  As the Society was considering entering the coal trade, it was necessary to include provision for stabling the horses used for pulling the coal and grocery carts.

New offices were erected next to the store in 1901 and the ornamental clock was added in 1904.  Over the years, a drapery shop, shoe mending facilities and a bakery were added.  Opposite the store was the “hall” erected by Miss Hudson of Brabyns Hall as a place for recreation by the wounded soldiers living at the Hall during the First World War.  It was used as Assembly Rooms by the Co-Op for many years after the war; the Men and Women’s Guilds held their meetings and the “divi” was shared out at the hall.  The shop closed in 1973.

By the end of the last century many of the local cotton mills and mines had closed and the district began to change with the building of villas for commuters to Manchester and Stockport.  The Edwardian era saw villas being built up Longhurst Lane; for a number of years called Mellor Road,and on Lower Fold.  Ludworth School opened in 1907.  Changes took place on Town Street with new buildings constructed, filling in gaps, sometimes with the demolition of all or part of older buildings.  The Blacksmith which used to exist on the site of the car park next to the chemist shop was closed in the 1920s.

Since that time, many new houses have been built in the area surrounding Marple Bridge, and at first they brought prosperity to Town Street.  In the recent past, tremendous changes in shopping patterns, car ownership and the growth of large supermarkets have reflected in the number and type of shops on Town Street.

In 1936 Mellor and Ludworth were removed from the county of Derbyshire to become part of the Marple Urban District.  Yet another change occurred in 1974 when the district became part of Stockport Metropolitan Borough in the County of Greater Manchester.  In 1984 the Metropolitan Authorities ceased to exist although the County of Greater Manchester remains.

In 1973 Marple Bridge was made a Conservation Area.