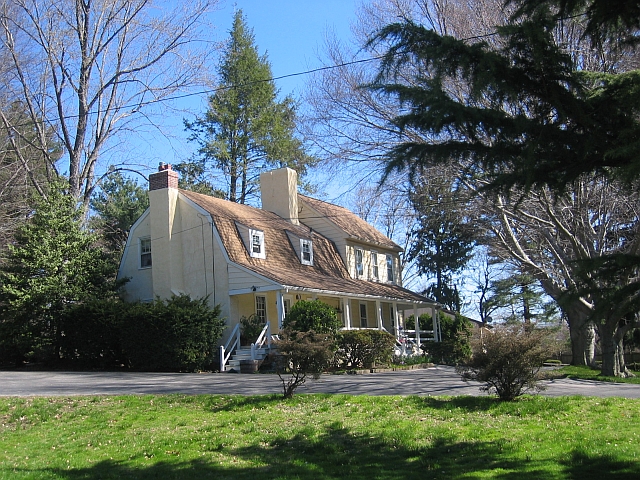 The Story of “This Old House"

A story that comes courtesy of Marple Historical Society.

Marple Township originates from 1684, on the 29th September 1863; Quakers had settled the county Delaware after sailing along the River Delaware, in the ship Endeavor.

The Lovely Standfield house (top photo) was built by Francis and his wife Grace on part of the 600 acre plantation, located in Marple Township, which Francis had purchased from William Penn prior to emigrating from England in 1683.

Francis, a husbandman (farmer) brought his wife, children and eight indentured servants, including Thomas Massey, to Pennsylvania on the ship Endeavor one year after William Penn established his new colony in order to escape religious persecution. Many members of the Society of Friends had been arrested in England for attending Quaker meeting and their property was seized.

The Standfields were among the earliest settlers in Marple Township and were probably instrumental in naming the town after their village of Marple in Cheshire, England. They were lucky enough to escape from England with considerable assets and thus were able to begin construction of their log house which still remains under the plaster used in subsequent extensive additions and renovations. Francis estab-lished his estate and he and son James quickly built up a thriving trading and shipping business. Francis served also as a member of the Pennsylvania Provincial Assembly. Grace Standfield was a midwife for the community. Grace died in 1691 and Francis died one year later. 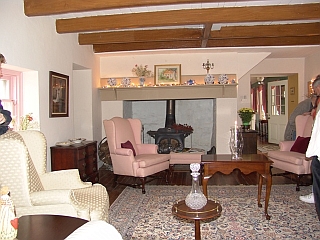 A 1687 map shows joint ownership of the tract with his son James. James was a collector for Public Aide for the Township of Marple and later held the positions of Constable and Tax Collector. James lived in Philadelphia in order to oversee the trading operations and died in the “great epidemic of yellow fever” in 1699. A few years after the death of their brother James, his sisters sold the property in Marple Township which had belonged to their family. (Photo of the original home [interior] of Francis Stanfield at Marple Twp, Delaware Co, Pennsylvania. Although most of the structure has been modernized (new walls, roofing, etc), the internal framing, flooring, and fireplace are original. Taken by Chad G. Nichols)

The house has had many owners over the years. In 1699 the house was sold to John Rhoads of Derbyshire, England. When John died in 1701 he left the house to his youngest son Joseph who lived in the house and built a Tannery on the property. Joseph Rhoads died in 1732 and his wife Abigail Owen Rhoads ran the tanyard until her son James was old enough to take over the business. The Rhoads Tannery operated in Marple Township until 1861 when it moved to Newark, Delaware. The Hagley Museum and Library is the repository for the records of this early American enterprise.

In 1984 the house was purchased by Mr. and Mrs. Richard Ryder. Mrs. Ryder relates a story of a woman who knocked on her door one afternoon and told her that she had once lived in the house for 14 years. The woman’s father-in-law had purchased the house from Atwater Kent and had given it to his son and his bride as a wedding gift.

Mrs. Ryder, a lover and preserver of history, welcomes family and guests. She enjoys entertaining and showing off her beautiful home and relates all of the wonderful stories about uncovering the history of the home and meeting many of the descendants of the Standfield family who have come from around the country to visit their ancestral home. 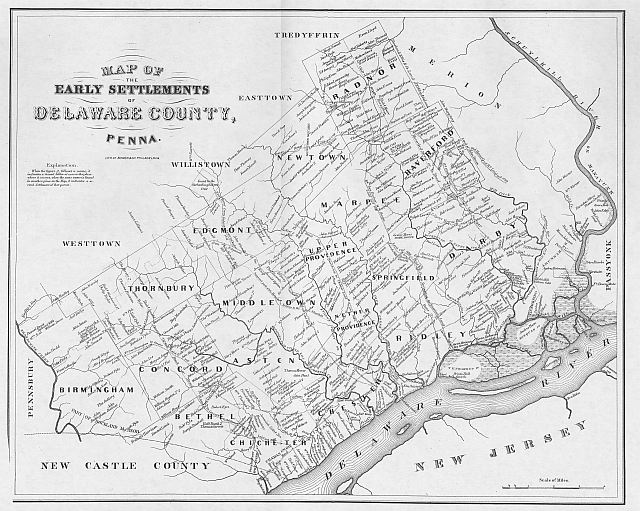 Map of the Early Settlements of Delaware County, Pennsylvania; Lithograph of Bowen & Co., Philadelphia. A map of most of the early settlers circa 1700 to 1750. Various families are identified in the map: Maris, Mendenhall, Pearson, Newlin, Stanfield, & Woodward: