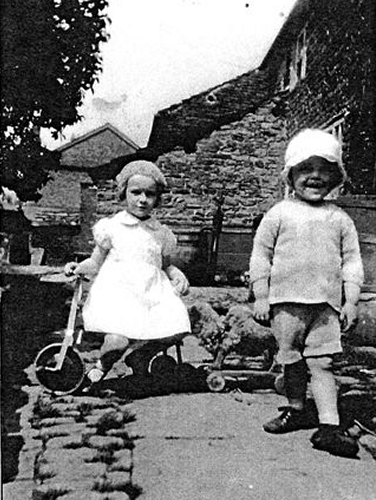 They brought with them family photographs and information which are now on the Marple website. Of particular interest to our Society is the Rishworth’s family connection with Peace Farm, formerly known as The Place” and which was the probable birthplace of Judge John Bradshawe in 1602.  On the site of the farm is now the Petrol Station at the junction of Church Lane and Stockport Road and there is a blue commemorative plaque on the side of the garage shop. On the 27th January 1649 he was to pronounce the sentence of the Court on King Charles I. Tradition has it that the warrant for the King's execution was signed in Bradshawe's house at Walton-on-Thames - his own signature, appearing first on that well known document.

Below are a few memories from John and his sister, Mary.

John was born in 1932 in Peace Farm, possibly the last person to be born there. He remembers that their grandfather clock was so tall that a hole had to be made in the ceiling so that it protruded into the bedroom After the demolition of Peace Farm the family moved to Bridge Farm, Hibbert Lane. John remembers the cottages between the Jolly Sailor, situated at the road junction between Station Road and Stockport Road, and Bowden Lane. When the cottages had been pulled down there was an attempt to start a market. He thinks that Cross Lane cottages were near Throstle Grove. His father, John, recovered and made use of some of the beams from the demolition of the cottages.

John later went to the Cheshire College of Agriculture and left Marple in 1957 to take the tenancy of a smallholding near Grantham. He spent all his working life in agriculture, later in the Congleton area.

The rent for the farms had to be paid to Marple Hall and John’s sister, Mary, has a very early memory of going into the Hall and seeing the suits of armour.

The adjacent photo shows Beryl and John Rishworth Jnr. in the garden of Peace Farm, where he was born. John, who provided this photo, is now 78 so this is probably c1935-36 pictured.