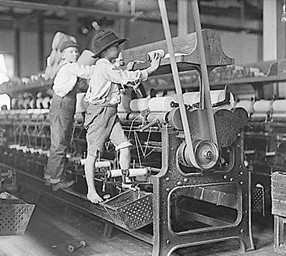 This article contains a newspaper report on an industrial accident at Botham’s Mill, Mellor in 1878, which resulted in the death of an 11 year old girl, the subsequent inquest and recommendations.

The industrial revolution brought with it a large demand for female and child labour. Prior to this, children had always done work, in their homes or fields nearby, much of it depending on the season. With the transfer of the work to textile factories they now often worked more than 12 hours a day.

In 1833 a new law was passed to curtail child labour and the first factory inspectors were appointed. Children under 9 were banned from working in textile factories. It was to be maximum 12 hours a day or 48 hours a week for those aged 9 to 13. 13 to 18 could work no more than 69 hours per week. No night work could be performed by under 18s.

An 1885 report documented the causes of industrial accidents. Workers received no formal training and were given limited instruction on how to carry out their work safely.

The report stated that in the annual death toll, 49% of all fatalities were caused by falls, particularly in factories where no safeguard had been installed to prevent people falling from a great height. The report also said that nearly 25% of all deaths were caused when workers became crushed or entangled in machinery and almost a third of the total death toll was a result of maintenance work fatalities.

The late Tom Oldham, found this newspaper article during the course of his research. Thanks, Tom.

On Monday morning an accident occurred at Botham’s Mill, Mellor, worked by John Clayton and Co. Limited by which a girl named Betsy Close, daughter of Mr. John Thomas Close, a platelayer, Marple Bridge, lost her life. The girl aged 11 years was playing near the entrance to the hoist, on the landing of the fourth storey, when she missed her hold through looking up, and fell to the flagged bottom of the shaft, a depth of four storeys.

She was killed instantly. She had been warned the same morning not to go near the hoist, and indeed had no business whatever on the landing at all, as it was the duty of another person to bring into the room, where the girl worked, what was required. The inquest was held on Tuesday night at the Railway Inn, Marple Bridge before Dr. Bennet of Buxton. It was suggested that the proprietor of the mill should be recommended to secure the gates of the hoist from the inside. The Coroner said no doubt they would gladly do that, and he would send the jury’s recommendation to the proper quarters.

A record of ‘Accidental Death’ was returned.