A splendid advertisement for just one of the local fundraising efforts that took place around Britain in early 1942. 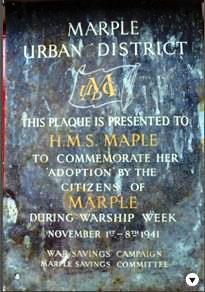 Wars are expensive, and the government needed more money than could be raised by taxation. As a result it asked the people to lend money in various ways that would be repaid after the war. Persuading people to invest was not easy and the government used local savings campaigns, advertisements and posters to appeal to patriotic instincts. In particular, communities were encouraged to compete against each other to raise the most money. These National Savings Campaigns were usually for a one-week period and went under titles such as War Weapons Week, Wings for Victory or Salute the Solider.

One such campaign was Warship Weeks, encouraging local communities to adopt a Royal Navy warship. A level of savings would be set and the aim was for cities to raise enough to adopt battleships and aircraft carriers while towns and villages would focus on cruisers and destroyers. Smaller towns and villages would be set a lower figure and once the target amount was reached, the community would adopt the ship and its crew.

Local charity organisations, churches and schools would provide the crews of the adopted ship with gloves, woollen socks and balaclavas. The ship’s commanding officer would exchange plaques, objects and photographs with the city or town concerned. Where possible, officers and men from the adopted ship would visit the local community. To celebrate their visit, a parade would often be organised in their honour.

In September 1941 Marple UDC received a letter from the Lord Lieutenant of Cheshire, asking the council to co-operate with the County Council by holding a Warship Week to aid the National Savings Campaign. Local firms were asked to contribute towards the cost of an advertisement, which was to appear in local newspapers including the North Cheshire Herald and the High Peak Reporter.

The citizens of Marple stepped up to the challenge. £40,000 would cover the cost of a Minesweeper’s hull but very quickly the Chairman of the Marple Savings Campaign Committee claimed that he would be very surprised if that amount wasn’t exceeded and that the £60,000 needed to completely equip the vessel could and would be achieved. In fact, with the help of local firms, £60,000 was raised on the very first day and a further £15,000 in pledges was received. To put these figures into context, £60,000 in 1941 equates to £2.7m in 2015. 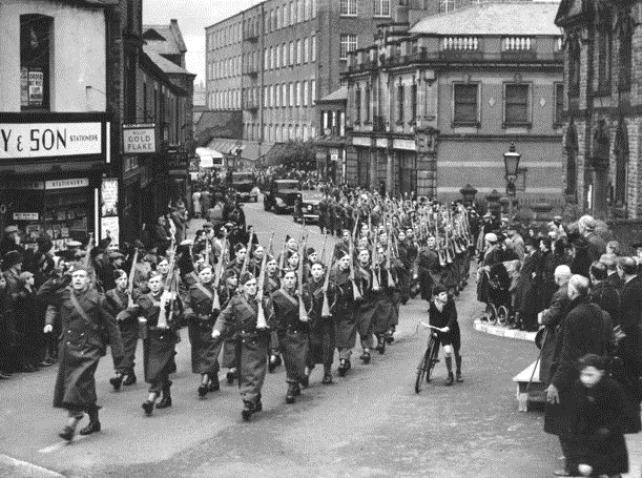 In January 1942 MUDC received a letter from the Secretary of the Admiralty confirming the adoption of trawler minesweeper Maple. An admiralty spokesman told how they were not able to change the name of the ship but that, in the spirit of things, HMS Maple was the nearest they could achieve. 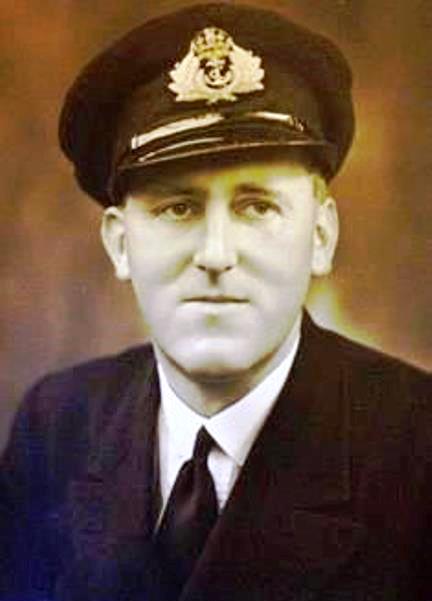 ple was built by Cook, Welton & Gemmell in Beverley, East Riding of Yorkshire and had a displacement of 357 tons. She was launched on the 9th July 1929 and was taken over by the Admiralty in February 1939 in anticipation of war and fitted with a 4” gun. She served throughout the war, having eight different commanders between September 1939 and the end of 1945.

T/lt. Cyril Banford Sharp RNVR, (left) commander of HMS Maple when the ship was adopted by the citizens of Marple.

Having survived the war HMS Maple was sold to the Dutch government in 1946 and renamed The Sumatra. Presumably, the plaque was removed from the ship at this time and sent to Marple. The ship was scrapped in the Netherland in 1956.

After 75 years, we can once again celebrate a link that Marple once had with the Royal Navy. See the plaque in its 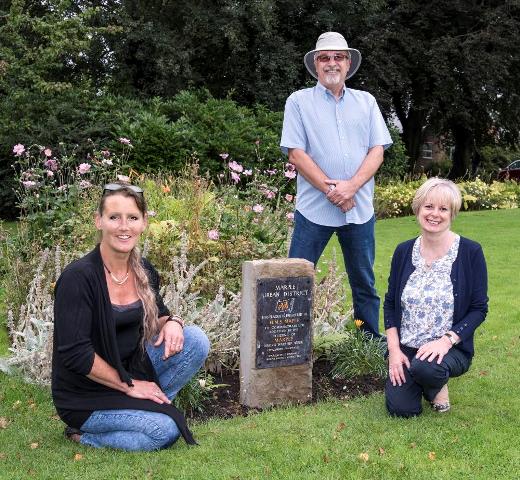 new home in Memorial Park, near the War Memorial.

Cook, Welton and Gemmell was a shipbuilders based in Hull and Beverley, East Riding of Yorkshire. England. The firm was founded in 1883 on South Bridge Road, Hull, on the Humber bank. The founding partners were William James Cook, Charles Keen Welton and William Gemmell. In 1901–1902, in order to expand, the business moved to a new yard at Grovehill, Beverley. The yard was 9 miles up river but regular dredging of the river Hull enabled ships to be launched and floated to the coast. The business was taken over by C D Holmes in March 1963 and then in July 1973 by the Drypool Group. The company name was changed to Beverley Shipbuilding and Engineering Co Ltd and this was in turn taken over by Whitby Shipyard Ltd on 1 July 1976.

During WWI Tugs, minesweepers and anti-submarine patrol boats were the main ships built for the War effort. In the 1920s the yard consolidated its reputation for building high quality trawlers and continued to do this during the inter war years. During the WWII the yard's output consisted of trawlers, Admiralty corvettes, landing craft, mine-layers and anti-submarine trawlers. After the war, the yard focused on trawlers again along with a few tugs. 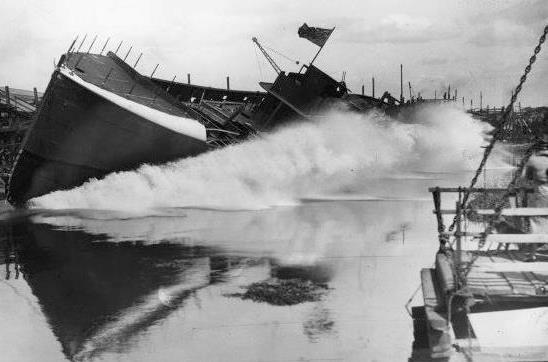 A photo from 1933 taken at Cook Welton & Gemmill’s Beverley shipyards showing the trawler St Amandus on her launch. In 1939 the trawler was requisitioned by the Royal Navy as an anti-submarine vessel.

There is an interesting follow-up to our piece several years ago about the ship we ‘adopted’ as a reward for the savings drive ‘Warship Week’ in November 1941. HMS Maple was a minesweeper, not exactly a battleship but performing just as vital a role by saving lives. T/Lt Cyril Banford Sharp was its commander when it was adopted by the people of Marple, and whilst his photograph is included in the article, nothing more was known about him. Two weeks ago Cyril’s granddaughter, Sarah Stone contacted the Society, having discovered the article whilst researching her family history. Neither Sarah, nor her mother and grandmother knew about the connection with Marple and it is ‘a lovely addition to our history’. 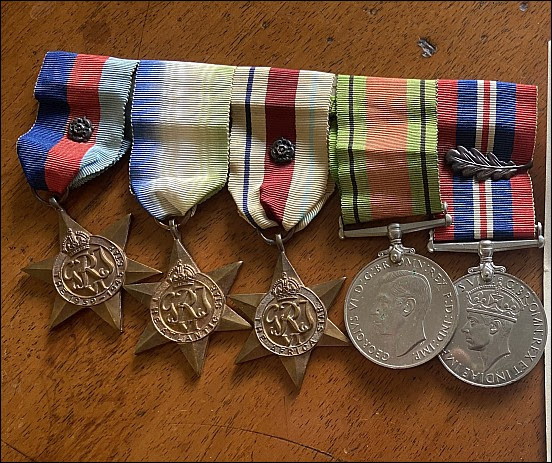 Sarah has kindly shared this photograph with us. Cyril was mentioned in Dispatches on 27th April 1941 and that is reflected in his medals. Sarah is investigating further and hopefully we will soon be able to add more information to the article.

Julie Clay for donating the HMS Maple plaque to the Society.
Stockport ECO Centre who donated the stone on which it is now mounted.
Mike Atkinson at Marple Blasting Services who transported, blast-cleaned and sealed the stone free of charge.
Tony Grimes at Benring Ltd who supplied epoxy resin adhesive FOC.
Adrian Ellis who supplied 5 bags of postcrete FOC.
GT Landscapes & Construction who installed the stone in the park FOC.
Mark Whittaker from Friends of Memorial Park who negotiated and facilitated the above and also mounted the plaques to the stone.
Ian Bradshaw, whose generous gift of £100.00 has paid for the information plaque attached to the stone and other minor fixtures and fittings.