The ‘Curious Cheshire Charabanc Caper’, was a journey that started not on this day, but many summers ago, when a fresh-faced and innocent Donald Reid took his bike, thermos flask and butties to Neston Old Quay. This early convert to history could not have dreamt that he would return a lifetime later, with a group enticed there by his book and by his illuminating talk, both sharing the title ‘Curious Cheshire’. 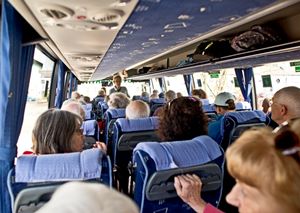 Anxious faces peered from behind drawn curtains that morning. Anxious minds took in the view. “Spot on”, a bright, dry spring day beckoned. A wait of months was over.

The Marple contingent was about to experience selections from ‘Curious Cheshire’ come to life. The coach was met, seats found, seat-belts fastened and enjoyment taken from the growing expectation of the day ahead.

Go West! And we did! Emerging from the coach at our first stop, for the traditional refreshment and comfort break, we found o 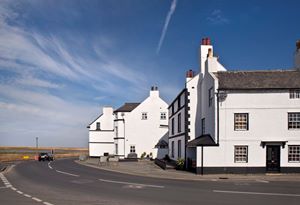 urselves in Parkgate, by the ‘Old Quay’ pub/restaurant.’ Old Quay’ is the giveaway. In order to see ships here we would have had to travel back to the 1700s. The Dee Estuary has silted up over the centuries; Neston and Parkgate have both been ports in their earlier histories. Neston in the 17th century, Parkgate (left) in the 18th: ports that have drifted inland, pushed there by the current of time. Those fortunate to have been in the early stages of queue for refreshment, had an opportunity to promenade near the ‘front’, and to gaze over sea grass covered sand banks to distant Wales. 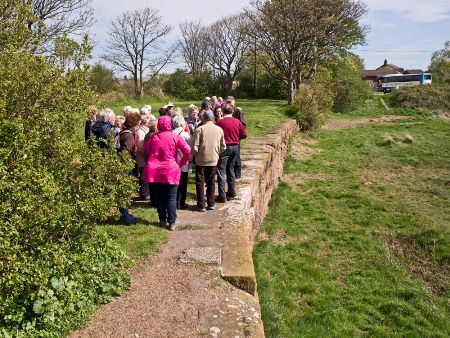 Clambering back onto the coach and off to Neston Collieries. Coal mining commenced about 1760, with a second pit opening in 1810. Denhall Quay (right) was constructed in 1791, to ship the coal to North Wales, the Isle of Man and Ireland. By 1855 both mines had closed, as ships could no longer berth at Denhall, silting had thwarted any development, a common theme for the area. With the sunshine, the ground dry underfoot and instructive interpretation boards, this was an enriching stop.

Back in the coach, we had the shortest leg of the day; just time to fasten belt, blow nose, release belt 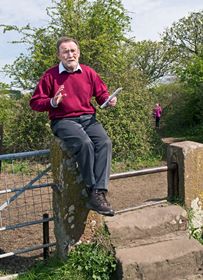 and disembark. Neston Old Quay was the next ‘Curiosity’. A longer walk here, but again a fruitful walk in the sun, with a harvest of the history of both this site, and that of our leader. This was the site first visited by Don (left) as a young lad, with packed lunch and propped bike. In those days the ground floor remains of the two storey Customs House/inn were still visible; all that remains now is a bramble covered mound with traces of masonry to be seen for those searching hard enough. Another victim of the ever present silting phenomenon in the area, any body of water is but a distant sight. The Quay built in 1541, became the base for ferries to Ireland, North Wales and the Isle of Man. What is now just an area of grass and stone (right) was once a hub for international trade, exporting salt and tanning produce, the leather industry was of great importance within Britain, in the 16th century, catering for general necessities such as shoe and glove production, it was useful for agricultural purposes through the production of saddles and harnesses. But despite the needs of these industries, all activity had ceased by 1704

Time moved on, time for lunch moved in, we had arrived in Chester. A phalanx of European coaches awaited our arrival in the Little Roodee. The party were released from their duties and scattered to the four winds in search of sustenance, with the strict proviso to meet at the appointed time, prompt! A card in the Little Roodee café assured us that Tom Jones, is now a qualified Chester City Guide, but perhaps ‘It’s not Unusual’. 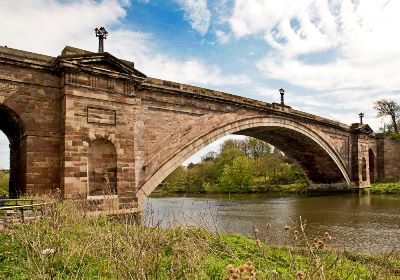 assembled for our walk along the walls, not with Tom Jones, but the almost equally famous Donald Reid. The pre-amble to the walls took us via the architect’s model of the Grade 1 Listed Structure, the Grosvenor Bridge, (left) which is nearby, but was hidden by trees from our vantage point.

The Roman fort of Deva had to be defended; this led to the original construction of the walls, a rectangular standard Roman layout, with four gates. Anglo-Saxons, Normans and medieval builders extended and repaired this inheritance; eventually the walls became a walkway. This is some two miles in 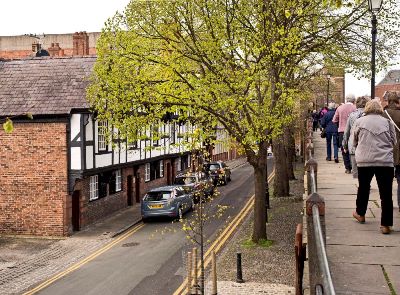 length, with access to and from at many points, giving a superb ‘high rise’ view of the City. As a ‘school party’ we had to keep together and to one side, (right) negotiating a motorway of pedestrians. Our raised view gave Don the opportunity to point out selected buildings from the vista before us, particularly the half exposed Roman Amphitheatre. Many a chance came for ‘further education’ as we halted and viewed the areas below, from Don the lecturer for the day.

Descending from the Walls, by the splendid Northgate (below), Don let us of the leash for the rest of the afternoon, until the time for re-union with the coach. The mission now became a hunt for a brew and a morsel or two.

A fine day, enjoyed in fine weather, finely tuned by Judith with her organization skills. A fascinating sample of the curiosities that Cheshire has to offer. Our thanks are thus due to Judith and to Donald for his skill in imparting his knowledge with such aplomb.

all photos by Athur Procter, and are copyright. See a gallery, 20 of Arthur's photos of the day, at the foot of the article. 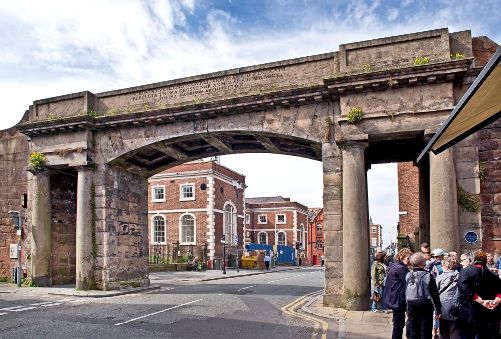 On the coach, to our next stop

The party on the Newhall Quay

Showing the curve of Denhall Quay

Return, in the sun, to the coach

One man, one dog, one day, on the Quay

By the Dee, walking the Walls

The 'Roman Garden' seen from the Walls

The view of the Roman Forum from the Walls

Eastgate Clock, from the Walls