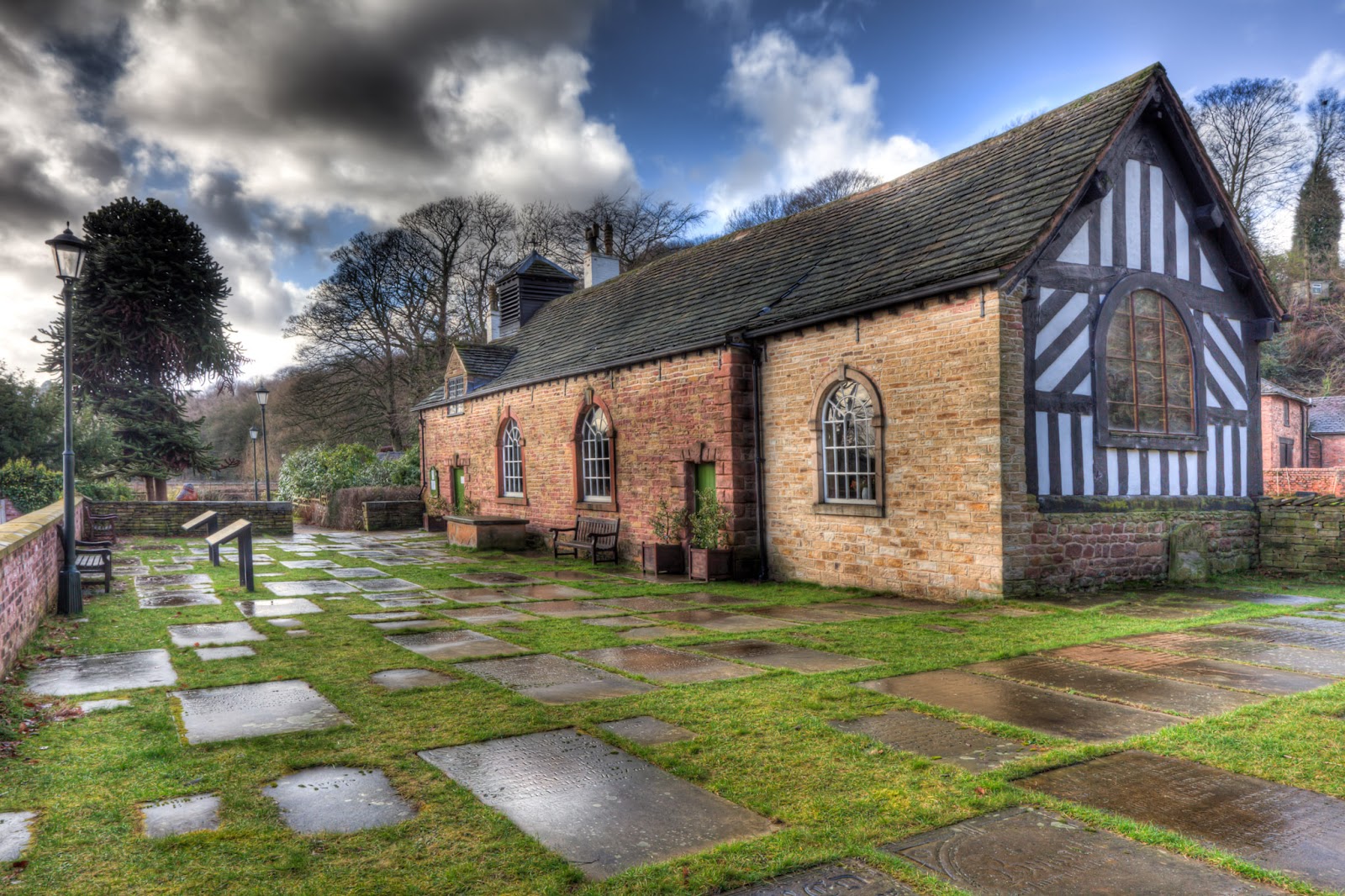 One Saturday afternoon in October, the members of the society joined a three stage ‘Tour de Chadkirk’ encompassing 1500 years of history. To paraphrase Dickens, ‘It was the oldest of times, and the newest of times’ that afternoon.Judith had organised a walking tour of the Chadkirk area, taking in the old and new, Chadkirk Chapel, Stockport Hydro and for those with limitless energy an opportunity visit to the new Sustrans footbridge over the Goyt. Not just for human feet but for cycles and horses as well.

On a cool but sunny afternoon, the select band of twenty four gathered on the rough (but soon to be landscaped) area outside the Hydro building. Once ticked off on Judith’s list, we had an introductory talk giving us the organisation and history of Stockport Hydro - a community initiative to generate hydro-electricity from the River Goyt. During this introduction by Ben Alexander, Chairman Stockport Hydro, mention was made of Samuel Oldknow who harnessed the energy of the water two centuries ago further upstream at Mellor Mill. Suddenly Ben looked over his shoulder to the control room. Something was amiss! The screws had stopped! The first time this had happened. Was Oldknow making his prescence felt? No. All was well. A hiccup in the grid had caused the problem, it was thought, at the time.

The weir at Otterspool was built by Jesse Howard of Stockport, a local mill owner who planned but never built a cotton mill on the river in the 19th century. Stockport Hydro has taken advantage of his false start. Water is diverted from the weir, flows through two exposed screws, turning them in the process, and is then returned to the river. The screws drive the generators which produce the electricity. This is fed into the national grid nearby. 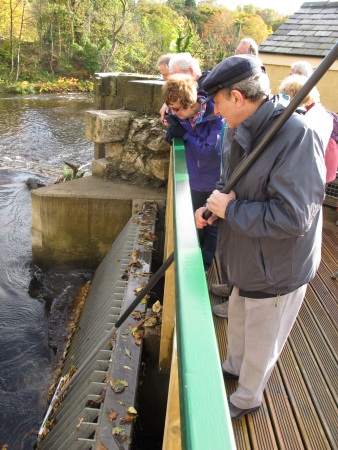 permission for the go ahead granted in 2011, when construction work started. The plant began generating in October 2012, and should have a life of forty years. The two main components are the Archimedes screws, Thunder & Lightning, which can operate independently and at variable speeds. The electricity produced could power sixty homes. The main source of income comes from the sale of electricity as the scheme receives "FiTs" payments - Feed-in-Tariffs.

Divided into three groups we explored the Hydro, inside and outside. Outside we learnt of the autumn task of clearing leaves, particularly sycamore leaves, from the water inlet screens, a task pursued with the home made rakes by day, and possibly by night should the call come. At the other end of the process, below Thunder & Lightning, water egresses back into the river.  Here the environmental constraints and needs were explained. As part of the construction phase, a huge amount of invasive non-indigenous plant species were removed and bat boxes and fish and mammal passes installed. Stockport Hydro have gone to great lengths to ensure the screws themselves are not harmful to fish or other wildlife using the river. Inside the machine room the controls, for the screws were explained. The working of the system can be monitored remotely from the comfort of home, such are the modern ways. Nevertheless, a team of dedicated volunteers regularly visit the plant to inspect and ensure its continual safe and efficient operation. We left educated and inspired by the enthusiasm and the energy of the people we met.

We then met our guide for the next stage of the Tour, Frank Galvin. Frank is the recently retired curator of Stockport Museums and was the driving force in the restoration of Chadkirk Chapel in 1994. 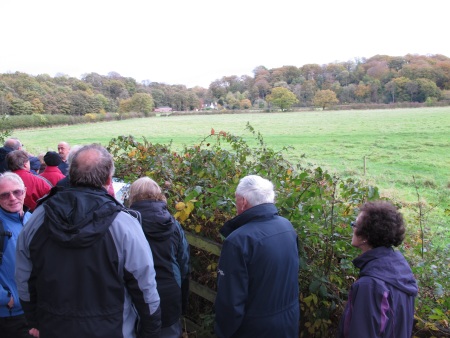 We took the footpath by the brook, (left) and en-route Frank enlightened us with facts about the area around the boundary of the Chadkirk plain.The land was owned by the Nicholson family, who leased the land to William Wright in 1755, for the bleaching, dyeing and printing of cloth. At the time this process could take eight months; surprisingly. In the latter days of this local industry it was owned by the Tootal Group and was the site of the first world’s polyester dyeing process. Chadkirk Farm, which is situated on the floodplain, has an area of over 60 acres, and has been cultivated since Saxon times in the 5th century. The land no longer bears crops, but in the past it was used for both cereals and grazing. We weaved our way through the trees, an ancient woodland, towards St Chads Well.This is associated in local tradition with St. Chad, the 7th Century Bishop of Lichfield. The well is decorated each year during the Chadkirk Festival. 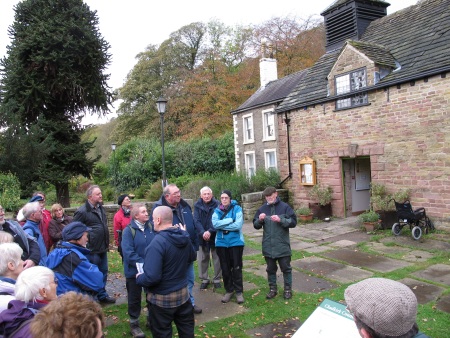 Frank then led us to the outside of the Chapel, (left) for a briefing on the history and the process of the last restoration in 1994. Previous restorations had occurred through the centuries – 1973, 1876, 1860, 1766 and several before that. As a chapel it has had something of a chequered history. It was a long way from St Mary’s in Stockport so the parish priest was not always aware of what was going on. Worshippers were Puritan Dissenters from 1640. In 1689 it became a Presbyterian place of worship and, after their eviction in 1705, the Church of England took possession in 1747. Frank took us on a tour round the interior. The restoration of 1994 was funded by the Europen Regional Development Fund and Stockport Council. The Greater Manchester Archaeological Unit both surveyed the buiding and excavated the interior, at that time. Carved oak panelling, depicting the life of St.Chad,was installed, together with the new loft.The panelling was the work of Ben Coode-Adams, as was the Tree of Life and altar pieces. Artist Tom Dagnall's work can be seen in the form of the altar and sandstone statue of St. Chad. We were able to enjoy a tea/coffee from the volunteers who man the Chapel on Saturday & Sunday afternoons, when it is open to the public. Leaving the Chapel, we could wander round the walled garden that is adjacent to the Chapel. Those with an excess of energy could take a short walk to the recently constructed Sustran bridge over the Goyt.

Our thanks for a stimulating and enjoyable afternoon go to Judith, for her organisational skills, to Stockport Hydro for their hospitably, and to Frank Galvin for his enlightenment of all things Chadkirk. 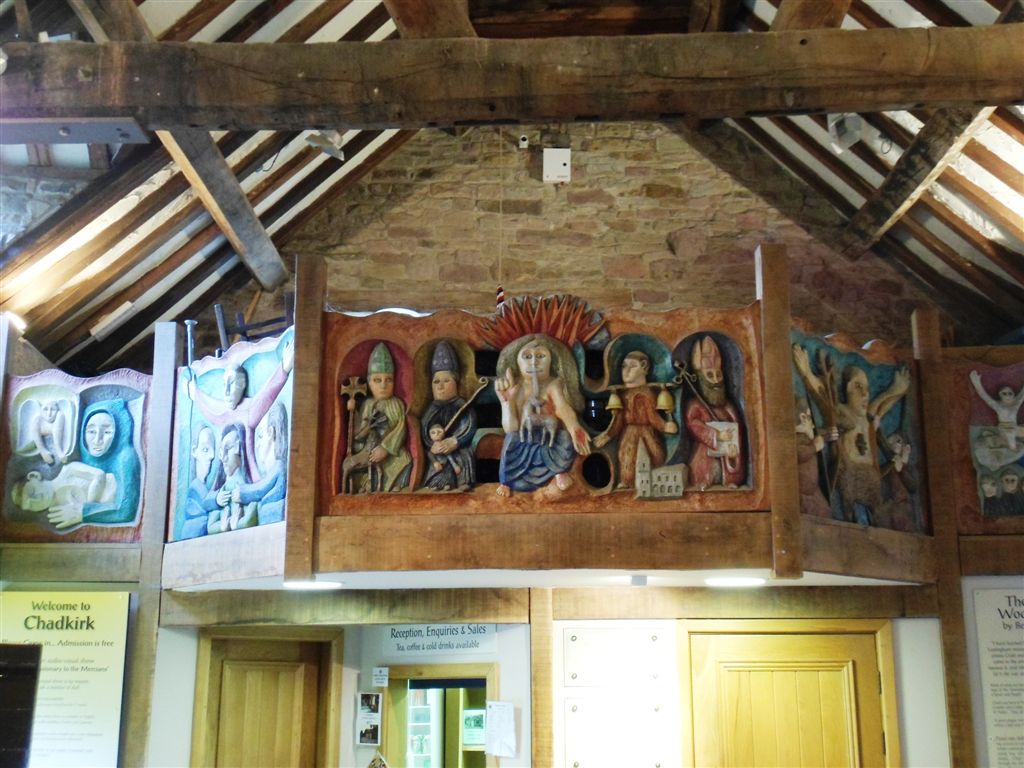 Another view of the Stockport Hydro introduction

The inlet screen to the Hydro, from the river.

The perennial problem leaves and debris on the screen

The production of power from the screws explained

The 'business' end of the two Archimedes screws, the generators + friends

Frank Galvin's intoduction to the history of Chadkirk Estate

A halt on the path, overlooking the old linen drying field

A halt to read the information board, in the Little Wood

Crossing the stream towards Little Wood

Frank Galvin's intoduction to the Chapel

A view down the length of the Chapel

The Sustran Bridge over the Goyt, constructed in 2012