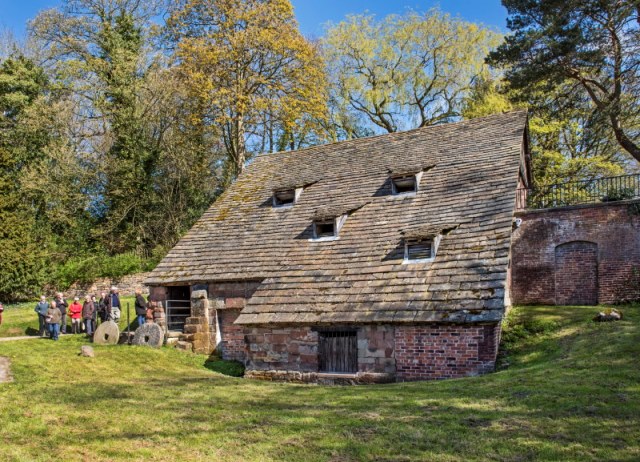 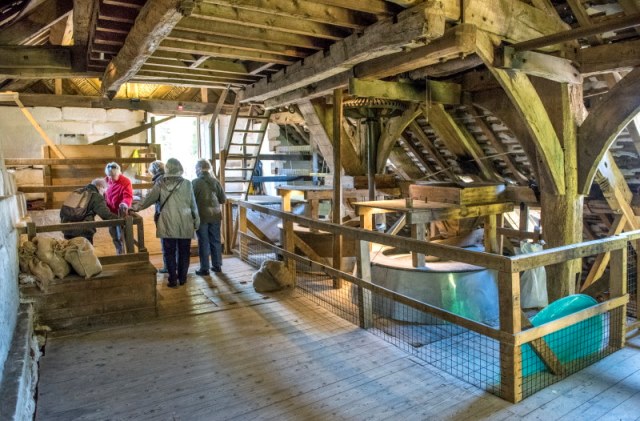 A very select group, 19 in all, left the waking Marple on the bright spring morning. A warning had been issued by Judith that Nether Alderley Mill had no refreshments, but perhaps more importantly, no toilet facilities. 'You have been warned'

Arriving at the mill we were met by four guides, refugee volunteers from the tad larger mill, Quarry Bank. The Alderley Mill building, with its distinctive sloping roof, dates from the middle Ages. The millpond,the source of the mill's power, surrounds an island, and its house, once the home of the Stanley family, lords of the manor of Nether Alderley for over 300 years, from 1602 to 1938, owning and controlling the mill. Closing in 1939, the mill fell into dis-repair, becoming a National Property in 1950. It was not until, 1967-70, however, that the mill was restored to working order. Instrumental in this project was Dr. Cyril Boucher, who lived in Marple, in a house that overlooked the Peak Forest Canal and became actively involved in the campaign to restore th 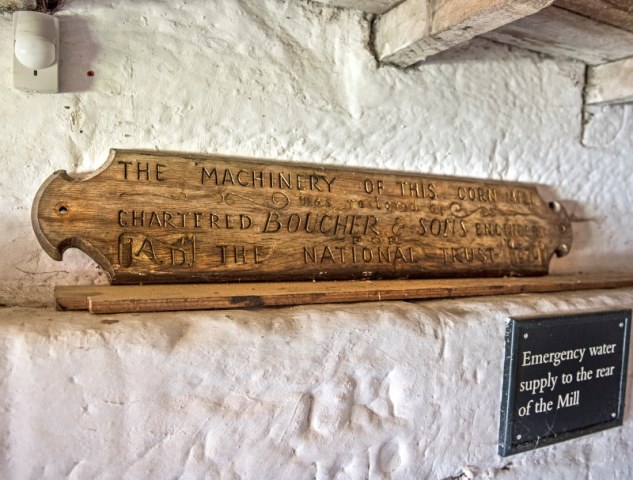 e canal. The first success in this campaign was the overturning of the decision to demolish the Marple Aqueduct.

We were split into two groups, an indication of the cosiness of the mill. After viewing the picturesque millpond, no Roman Lakes here, even to this day, we descended into the mill. Two waterwheels are used, and unusually these are connected. Why ? Discuss.The lower, of the two wheels was added in the 1840s. During the 1870s, a cast iron Hurst frame was installed, an internal framework supporting the gears and millstones, the frame isolated the building from the vibrations of the workings. After seeing the internal sluice gate, we went down, the rather steep, wooden stairs backwards to the next level. There we saw the rotating millstone. The surface of millstones, which are made from French quartz stone, are divided by deep grooves called furrows into separate flat areas called lands, and have a life of some 60 years. Millstones need to be evenly balanced, and achieving 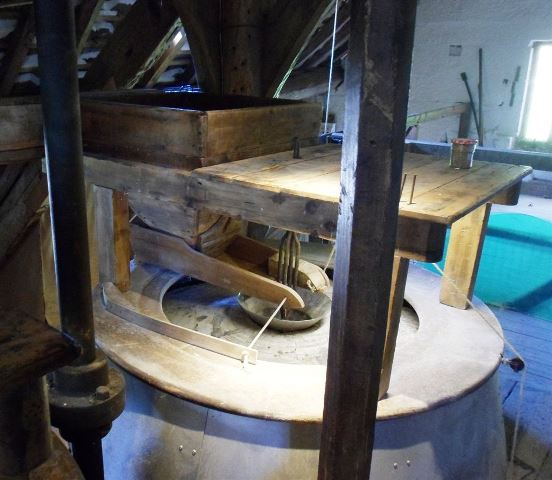 the correct separation of the stones is crucial to producing good quality flour. The experienced miller will be able to adjust their separation very accurately. After being shown the grist at the top of the stones, we saw the fine ground flour, on the ground floor. Before emerging into the sunlight we explored the old drying rooms, hard hats the order of the day.
Despite the danger that would come from a fire and it's sparks, a fireplace was set at the corner of two walls near the original large  door. It is thought the millers used this only early in the day. What a cold place it must have been, more so in the days of the Little Ice Age.

One revelation of the morning, those everyday phrases that come from milling, grist of the mill, grinding halt, and upper crust, are but three examples.

Judith gave us just over four hours to wander round the site at will. Most thought of a dish, but a dish of food this time, and headed to the Space Pavilion café, a modern space with quirky facts along the walls and lines of clocks displaying various space related times such as th 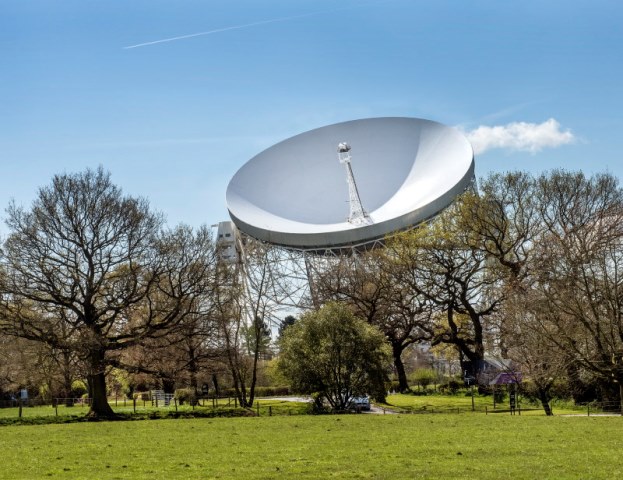 e time on Venus and in a black hole (with handy explanations for the non-physicists underneath). A few hardy, (foolhardy?) souls sat at picnic tables, willing the sun to stay out and play, ‘You will enjoy this!’ Ignore that cold, sharp breeze, of spring 2016, and keep those woolly hats on. The 40 acres or so of the site are strewn with technology and an arboretum. Both are the brainchild of Sir Bernard Lovell, founder of the Observatory, initially the Jodrell Bank Experimental Station, in 1945, when Bernard Lovell wished to use some equipment left over from World War II, to investigate cosmic rays.

The Granada Arboretum established in 1971,has, in addition to the 3000 or so trees, the National collections of malus and sorbus, and the Heather Society's calluna collection. A very pleasurable area, to rest the fact inundated minds, for a stroll. Chris Beardshaw designed the Galaxy Gardens in 2011, which consists of seven smaller gardens representing the seven key stages in the formation of the galaxy. These looked as if they could do with some TLC.

For a technology fix we could explore the Planet, Space, and Star Pavilions. The Space pavilion had numerous hands -on exhibits and explained how the Jodrell Bank scientists use radio telescopes to learn more about distant objects in space. Scientists we never saw, a shortcoming for visor experience? Plenty of hands-on kit, and a film pod, mainly populated by adults seeking a sit down, and rest from the onslaught new knowledge.

Being on the Cheshire Plain, all of the site is flat, including the pavilions, so good for access.

The walk around the Big Dish furnished us with some 'fascinating facts', to impress/bore people with. Did you know, for instance, that a teaspoon of neutron star material weigh about 1,000 million ton 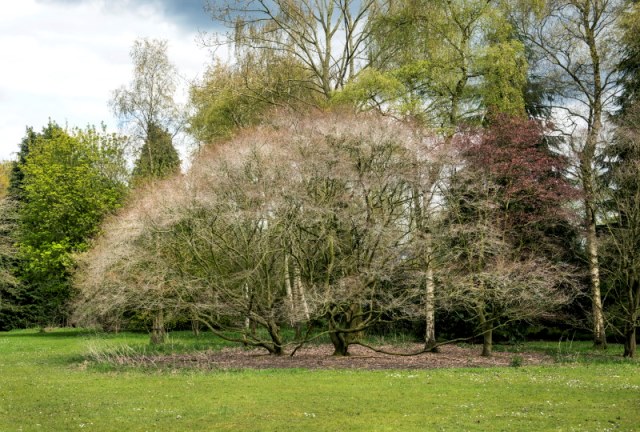 nes. That’s two thousand times the weight of the world’s largest supertanker, in one teaspoon.

We left as we arrived, in the sunshine of an April Saturday. This day tripper's thanks must go to Judith for all her organisation both before and on the day of the trip, thank you.

*Oh, and the answer to the puzzle, is 49. The numbers were emblazoned on the back of our petit coach, they are the numbers that can be carried in various Mecerdes Golden Green Travel Coaches, our carrier for the day.

YouTube: The Restoration and Conservation of Nether Alderley Mill in 2012 video below the photo gallery

What makes it tick

Power at the top

Half of the gang,

The Dish of Jodrell