The first visit of the season to Eyam in Derbyshire took place on a misty, wet day in October. However, our members are a hardy bunch and we all gathered in the courtyard at Eyam Hall at 10.00.a.m. as Hilary climbed some stone steps, all the better to be seen and briefly explained the order of the day. 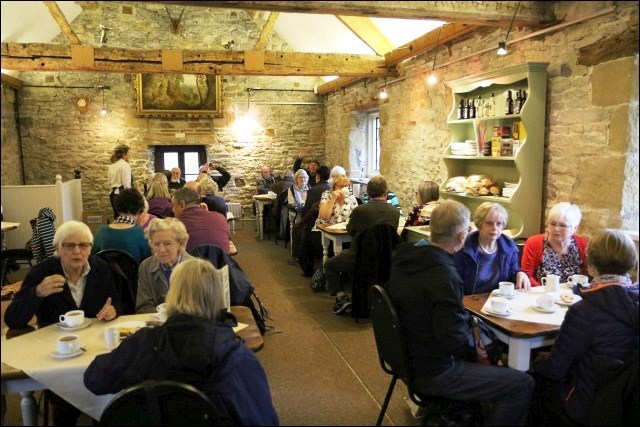 First, we enjoyed a welcoming hot drink and biscuits in the café (left) before splitting into two groups to begin a day of two halves: one group to join the morning tour of the Hall and the other the guided walk, which was repeated in reverse in the afternoon.

Eyam Hall, a small 17th century manor house, has been in the Wright family for over 300 years. Still owned by the descendants of the original owners, it is the first house leased to the National Trust and was handed over “lock, stock and barrel” - the owners having taken nothing from the house. Consequently, the Trust had no need to bring anything into the house to furnish or decorate it.

After a short introductory talk in the entrance hall, which, during the 17th century, was the main room of the house, members were able to wander through the public rooms at their leisure. Enthusiastic guides were on hand to share their knowledge and answer our questions. It was fascinating to see the kitchen areas, with plain walls, stone flagged floors and sparse decoration contrasted with the elegance of the drawing room, dining room and the library.

Throughout the house, photographs and portraits reminded us of the people who had lived there and the lives they had led. The nursery filled with toys including several train sets and a rocking horse complemented the main bedroom wit 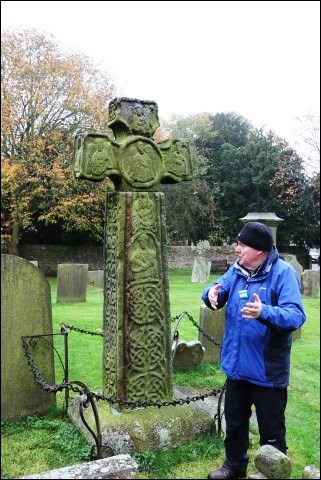 h its magnificent bed, put together centuries ago from various pieces of carved wood and which is adorned with the most beautifully embroidered bed coverings.

The garden was wet, but this did not stop members from exploring the herbaceous borders and lawns and it is easy to imagine how beautiful it must be on a dry, sunny day.

The village walks were accompanied by continual and sometimes heavy rain but this did not deter our guide, Mike, (right: Mike, beside the Saxon Cross) who had come prepared in his waterproofs, nor our members! Sheltering in the small building that used to be the Market Hall, Mike told us the story of the village, the importance of lead mining, the effect of bubonic plague on the inhabitants and how their response to this disease made the village famous.

The plague came suddenly to Eyam in early September 1665 when a carrier brought a large bundle of cloth into the village. It is likely that the damp bundle was made up of new material and second hand clothing, put together in London where the plague was rife. Laid out to dry by George Viccars, a tailor’s assistant, the cloth contained fleas that carried the disease. Within a week, George was dead, the first victim of the plague, to be followed by many more villagers. On the 24th June 1666 the Rector, William Mompesson told his congregation that the village must be isolated, with nobody allowed in or out and so began the quarantine and legend of the plague village. Arrangements were put in place for free food and medicines paid for by the Earl of Devonshire to be left on the edge of the village. Paid-for goods were left at what is now called “Mompesson’s Well” and at other places in the hills to the north. If there was running water, coins were left in the flow to ensure they were infection free. Money was also left in vinegar filled holes in the Boundary Stone, off Mill Lane. By this action, the villagers halted the spread of the disease. 14 months later, on 1st November 1667, Abraham Morten died, the last victim. In total, 260 people died out of a population of approximately 350. 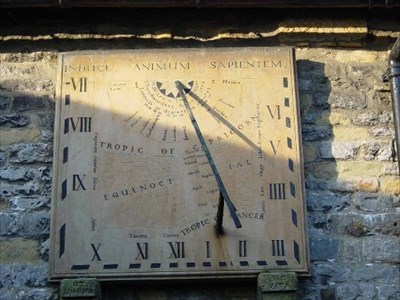 Moving from the Market Hall, we walked past the plague cottages, each with its plaque listing the victims and survivors and made our way to the Parish Church. In the churchyard Mike pointed out the Saxon cross, the sundial on the south wall dating from 1775 (left) and the tomb of Catherine Mompesson who died from the plague. She was the rector’s wife, and the only victim allowed to be buried in consecrated ground during this terrible period.

Beyond the church is Eyam School, where the gates are decorated with the nursery rhyme “Ring o’ Ring o’ Roses.”

There has been lead mining in the Peak District for thousands of years and it remained a major industry in the area until its decline in the 1850s. In the 1600s, many of the villagers would have earned a living in the lead mines.

The walk ended at the village square where Mike brought the story of the Plague Village into the 21st Century by telling us about the DNA research carried out at the beginning of the millennium, which identified the Delta 32 mutation. This mutation gives immunity to the bubonic plague and other diseases. To find out more, follow these links ……..Eyam and the CCR5 / Delta 32 mutation  and AIDS-cure hope in plague village

Finally, we had an opportunity to visit Eyam Parish Church, parts of which date to Saxon times. As well as being “the plague church,” it contains some beautiful wall paintings, whitewashed over in 1643 during the Civil war, and uncovered and preserved in 1963.

Our thanks to Neil Mullineux who suggested and organised the visit and to Hilary Atkinson for leading it.

Thanks to Bill Beard & David Burridge for the photos.