On a glorious summer day I was pleased to be one of 22 members of the Society who boarded the coach for the drive to Ashbourne.  I have driven through the town on a number of occasions and thought of it as a pretty market town that I should visit and find out more about. The elevated position of seating in the coach allowed for wonderful views of the Peak District with its miles 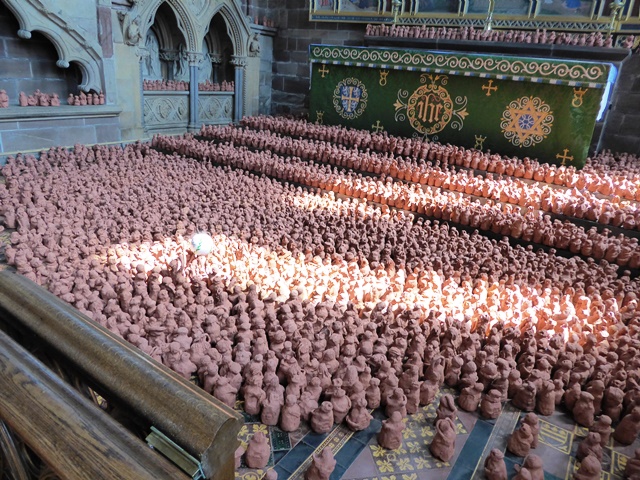 of dry stone walls as we drove along the A515 from Buxton to Ashbourne. On arrival the party was met by Geoff Cole, a local guide who first took us into St Oswald’s church to see the tribute to the local football game. This game has been played on Shrove Tuesday since medieval times and the whole town can take part in a game that lasts all day. Local people had made hundreds of terracotta figures and these were displayed in the chancel to depict the way the game is played with everyone joining in.

St Oswald’s church in mentioned in the Doomsday book and is well worth a visit which must include seeing the Boothby chapel and tombs.

From here the party moved on to the mainly Georgian main street through the town with the guide pointing out features of interest; among them a building which housed a grammar school that was approved by Elizabeth I in 1585 and is now divided into three private properties, The Grey House which has the best Georgian frontage in Ashbourne, and The Mansion, probably the oldest surviving brick building in the town. In its glory days Ashbourne was thriving town as it was a coaching stop and had many inns to provide accommodation for coaches and passengers. As the railway was developed the coaching trade ended, but many of these inns including the White Hart, the Old Bear Inn, the Green Man and Black’s Head Royal Hotel are still there, though some with other commercial uses. 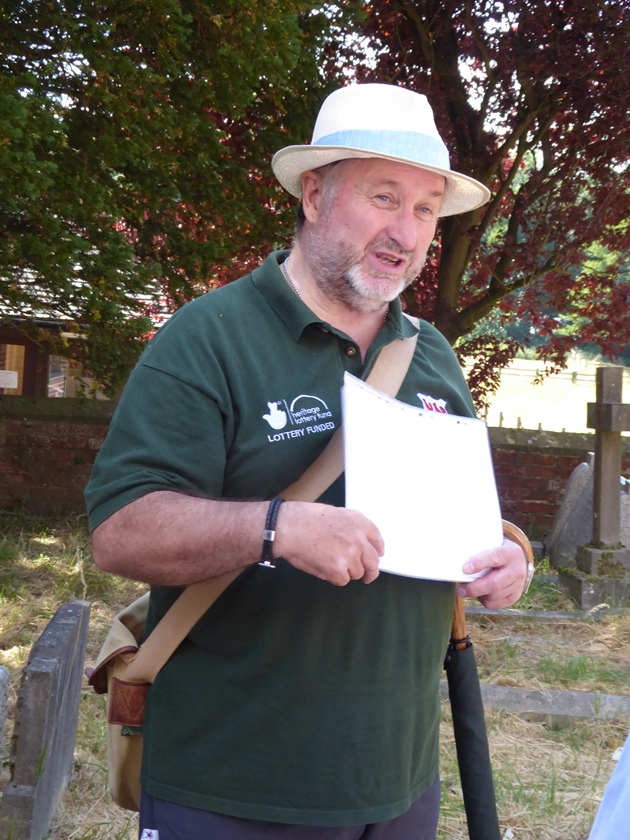 A tunnel runs under the main street where there is a slight hump in the road. This was for the railway line that was opened in 1899 from Ashbourne to Buxton. The line was not profitable and was finally closed in 1964. The route is now part of the Tissington Trail for walkers and cyclists.

As we looked behind the impressive main street up one of the many alley ways we visited one of the ‘yards’ that were built on the gardens of the big houses and here there were much smaller dwellings needed as the population of the town expanded.  Shakespeare’s Yard was named after a local butcher who had a slaughter house behind the shop and the surface drain to take the blood away can still be seen.

By now we had reached the Market Square where the tour of the town ended and a lunch stop was scheduled. There are many pubs and places to eat in the square, including a fish and chip shop housed in an original timber-framed building, possibly the oldest in the town as it has been dated to 1420.

Ashbourne proved to be a place that reveals more of itself the more you look. It has a fascinating history and some wonderful buildings, the morning had been interesting and thought provoking, and I am so pleased that I have been and seen more of Ashbourne than you notice when just driving through

After lunch the party re-joined the coach for the onward journey to Sudbury Hall.

The Rules & History of the Shrovetide Football, 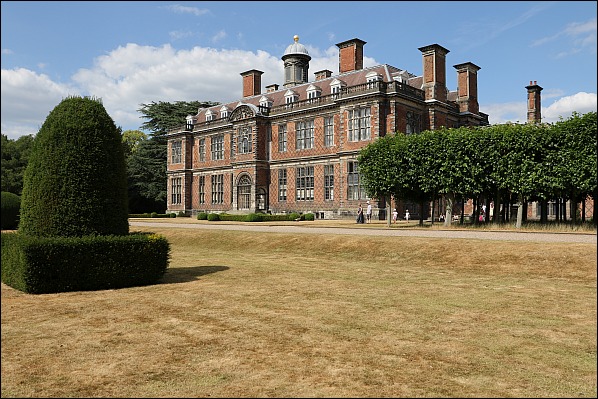 Sudbury Hall,  from the south

A short drive from Ashbourne is Sudbury Hall, the original seat of the Vernon family for 300 years until crippling death duties, after the death of the 9th Lord Vernon, resulted in the Hall being handed to the Treasury in 1967 and subsequently transferred to National Trust. The Estate Village wholly owned by the Vernon family is still intact today and worth a visit, in its own right, as is the Museum of Childhood located in the courtyard of the hall.

Construction got underway in the 1660s directed by George, first Lord Vernon, who took a close involvement in both design and 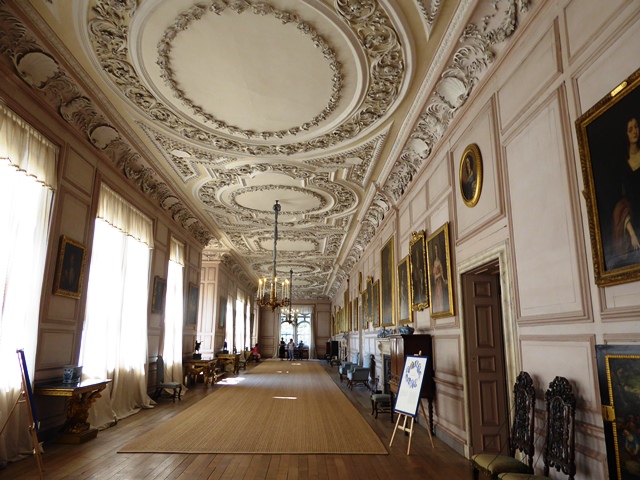 project management, ordering most of the materials himself and keeping full records of the costs which might account for why it took 30 years plus to finish! No other architect is mentioned; it seems that gentlemen were expected to have knowledge of surveying and building.

Few changes have been made over the years so the 17th Century Hall is what you get, though the family must have removed a lot of furniture upon handing it over to the Treasury as the rooms feel a little bare. Some previous visitors have described the house as being, ‘sparse, lacking atmosphere, a house without soul’.

The elevations both front and back are very symmetrical with a large cupola at roof level providing the focus for the elaborate porch entrance. The cupola is crowned with a golden ball to reflect the sun’s rays which it certainly did for our visit on a scorching day!

The National Trust had invited Derby College design students to provide an exhibition of pieces of work, entitled ‘Women and Power’, to celebrate 100 years of suffrage in Britain. With conceptual art and written explanations spread round the house it was both challenging and quirky if not baffling in parts. Also highlighted were the women of the house as the Vernon Lords married well, bringing power and wealth through their unions.

This is how the 4th Lord Vernon acquired the lucrative coalfields of Poynton, but just twenty years later the American Civil War 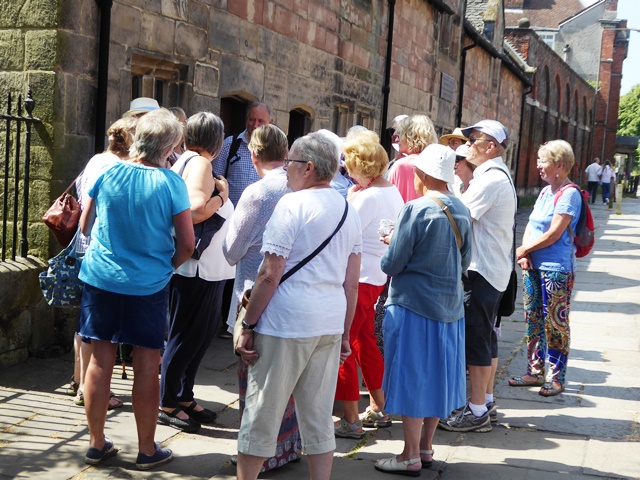 devastated the Lancashire cotton mills and the Poynton collieries. Losing £12,000 per year with 1000 starving employees and their families which Lord Vernon himself supported from his own pocket, he was forced to economise by shutting up the Hall and moving to a cottage in the village. A far throw from 20 years earlier when he had rented the Hall to the recently widowed Queen Adelaide for 3 years whilst he toured Italy.

(left: MLHS group in Ashbourne, which dispersed in Sudbury Hall)

One of the finest features of the house is the Great Staircase of which an architectural drawing exists in George Vernon’s hand. It was constructed in 4 different woods and one of the most talented craftsmen undertook the work. Edward Pierce had worked for Wren on four new churches and many other buildings following the great fire of London. It cost £112 in 1676, and since then has been covered with many layers of brown paint and varnish over three centuries. The National Trust have restored it to its full glory, which we weren’t able to fully take in as it was roped off for more restorations to the treads and landing. I doubt Mr Darcy had such trouble during the filming of the BBC adaption of Pride and Prejudice in 1995 when Sudbury provided the internal shots for Pemberley. Considered to be one of the finest 17th C staircases in the country, it was not fully finished until the ceiling paintings were undertaken some 20 years later by the artist Louis Laguerre of Chatsworth fame.

An excellent day out to this important English country house was further enhanced when the England team confirmed a place in the world cup semi-finals as we boarded the coach home. Well for those interested!

Meet the Housekeepers at Sudbury Hall - Sue and Pam