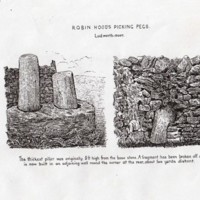 Miscellaneous pages relating to Robin Hood's Picking Rods from several sources and newspaper cuttings :
a. Illustration of Picking "Pegs" extracted from Wainwrights Memories of Marple.
b. Text & Diagram from Journal of the Derbyshire… 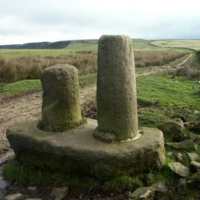 Photocopy of chapter 4 from Legends of Longendale by T Middleton entitled " Robin Hood's Visit to Longdendale".
Giving an account of why the stones on Ludworth Moor are called Robin Hood's. 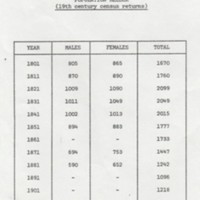 Report on W Bradley's address on "How to Improve Marple" 1893 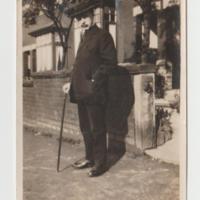 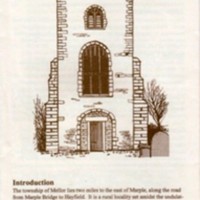 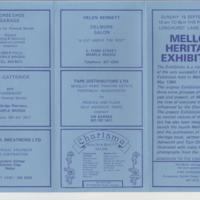 Leaflet for Mellor Heritage Exhibition in The Parish Hall, Mellor September 1985, with advertisements for local businesses and Programme for the Mellor Fesitval on 15th September 1985.
7 typed pages from the "Mellor Heritage" Committee Meetings from…

Notice : "Remember the Sabbath to keep it Holy" 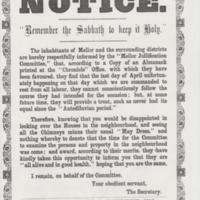 Photocopy of Notice entitled "Remember the Sabbath to keep it Holy" from Mellor Jollification Committee. Undated 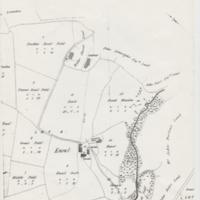 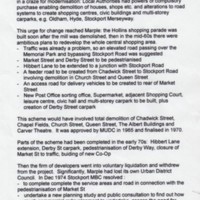 Bibliography of the Village of Mellor : Deeds Relating to Mellor 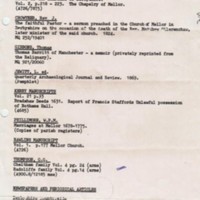 Photocopy of typed document of Bibliography of the Village of Mellor from May 1978. Also typed list of Deeds relating to Mellor held at Derby. 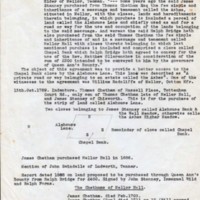 Newspaper extract 1887 : Need of a Police Station at Marple 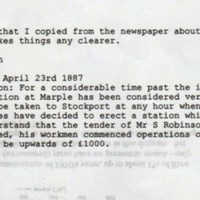 Email correspondence from Peter Clark giving information of a newspaper report for the need for a police station at Marple and the cost dated 1887.

Mellor Past and Present : Address read by C Pickford : 1931 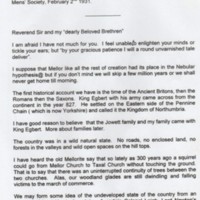 Typed transcript of an address read by C Pickford of Town's Cliff, Mellor at the Church of England's Mens Society on Febuary 2nd 1931 with photocopies of 1871, 1891 and 1901 census for the Pickford Family 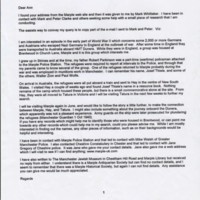 Email sent from Alan Parkinson in Australia with recollections and research he has carried out of his father Robert Parkinson a wartime policeman at the Marple Police Station with regard to German refugees who were housed at Brentwood, Church Lane,…

The Journal of the Manchester Geographical Society : 1900 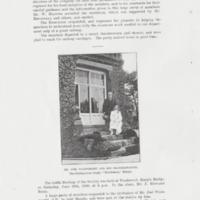 Photocopy of The Journal of the Manchester Geographical Society Vol XVI Pages 264 - 293 giving an account of the Society's on 30th June 1900.
Account of Mr Wainwrights tour of the village of Marple illustration and photographs. 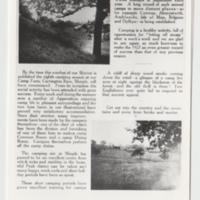 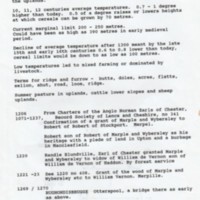 Typed page with Chronology of area around Mellor.
Dates from 1206 with the granting of Marple and Wybersley to Robert of Stockport. to 1964 Mellor Police Station closing. 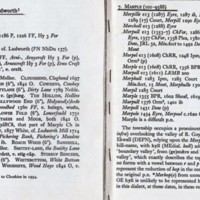 Two extracts from E.P.N.S. for Derbyshire and Cheshire covering Ludworth and Marple giving information descriptions of Local places of interest. 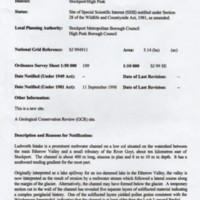 One page document for Site of Special Scientific Interest notification under Section 28 of the Wildlife and Countryside Act 1981 for Ludworth Intake.

Information on Ancient History of Mellor 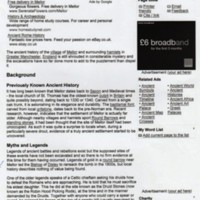 Extracts from The Modern Antiquarian 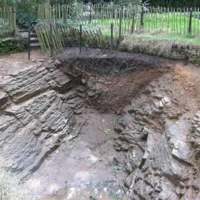 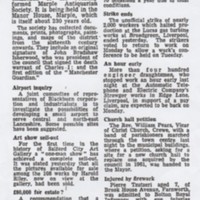 Photocopy of downloaded article from The Guardian October 12 1963, headed Northern News in Brief, sub headed "Memories .....on tape", containing a paragraph giving details of exhibition being held at Manor House of tape recorded reminiscences by…

Flyer for Mellor against Masts : 2006 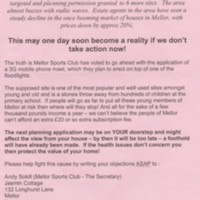 Flyer titled "Mellor against Masts" informing and encouraging local residents to write a letter of objection to Mellor Sports club for the planning application for a 3g mobile phone mast that is planned to be erected on one of the flood lights.

Correspondence for information on The Hollins : 1998 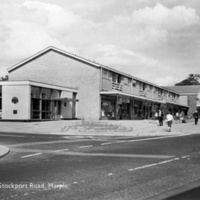 Correspondence from Debbie Barwell, an "A" level student wanting information of The Hollins, Marple for a possible Millennium project they have planned. Reply from Peter Bardsley, Secretary of Marple Local History Society. 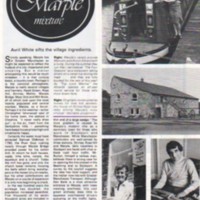