Series of Folders in Two drawer filing cabinet located on the right hand side of the archives nearest to the window, containing miscellaneous material relating to newspaper and magazine articles in the Marple and Surrounding Area

Original copy of the Stockport Times ( East Division ) dated 3rd May 1985 with front page article on Alfred Heath name being remembered on Marple's War Memorial.
Other stories from the Marple Area.

Four original copies of front pages and complete edition of the broadsheet newspaper the North Cheshire Herald :
a. October 1941 : Photocopy of "Seen from the Ridge" by Observer
b. September 1967 : Flood in Mellor
c. May 1968 : Royal Visit… 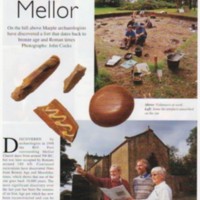