Folder containing items relating to World War One and Two.

Go to Hyperlink below for article from MLHS website recounting memories of WW1
https://www.marplelocalhistorysociety.org.uk/society-archives/stories-from-the-archive/stories-of-people/582-i-am-not-fond-at-all-of-writing.html 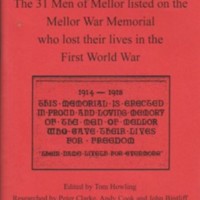 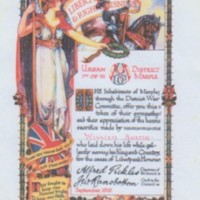 Photocopy of tribute certificate from Marple Urban District Council, District War Committee on behalf of the inhabitants of Marple giving appreciation of the heroic sacrifice made by their family member. September 1919 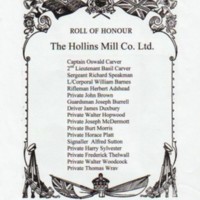 Two black and white Roll of Honours listing the names of men who worked at the Goyt Spinning Co Limited and Hollins Mill Co Limited and lost their lives during WW1. 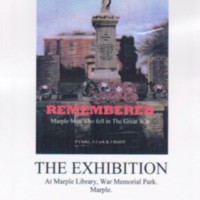 a. Laminated A4 Poster advertising Exhibition at Marple Library "Remembered" Marple Men who fell in The Great War on the 14th - 27th November 1999.
b. Newspaper cuttings from The Review 2006 with photograph of Peter Clark and his book "Remembered"… 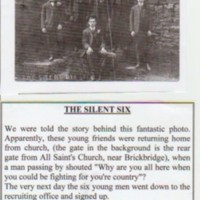 Photocopy of Black & White photograph of six young men outside the Brickbridge entrance to All Saint Church with writing on the left hand side stating "The Silent Six".
Photograph on Virtual Tour
Typed text explains the story of these young men… 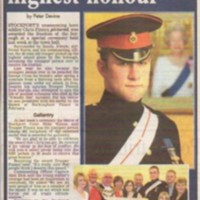 Newspaper cuttings relating to Forces Personnel from Marple including :
S.A 1991 : Tracing relatives of Lt Barlow who was shot down by Red Baron WW1
Chris Finney receiving the George Cross for Bravery : 2007
Wayne Ayres returning from Iraqi…
View all 6 items