Significant Houses of Marple and District.

Series of folders containing items relating to significant Houses in Marple and District. Research material relating to Manor House, 67 Station Road, Marple
Sources from local directories,
Census records for 1841, 1851 and 1871.
Newspapers articles from 1901 and for sale notice from Stockport Times 1984 "History for Sale"… Photocopy of newspaper cutting dating from 25th August 1837 giving information of an Auction of Farming stock, crops of corn, furniture, excellent long boat at Marple as Mr Thomas Simpson is changing this residence at Turf Lea.

Information of Houses giving by members of the Local History Society 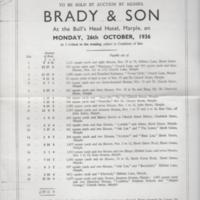 Photocopy of poster advertising Auction of 20 Valuable Chief and Ground Rent around Marple including Hibbert Lane.
By order of Sarah Johnson deceased to be held at the Bull's Head Hotel at Marple on Monday 26th October 1936 giving schedule of the… 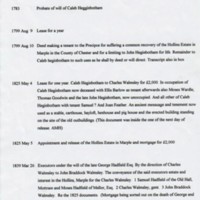 Handwritten (by Peter Bardsley) and typed information relating to the history and of the Hollins Estate from various periods 1712, 1825, 1867 and 1889.
Sources include deeds, indentures and leases held at Manchester Central Library.
Description of… 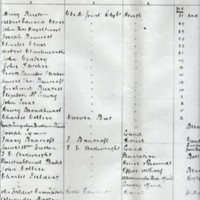 Photocopies of 5 pages of extracts from the Rating Valuation register dated 1914 for the Marple area on A3 paper
Information on owners of the properties listed, rateable values and names of occupants includes : Stone Row, Hollins Terrace, Hollins… 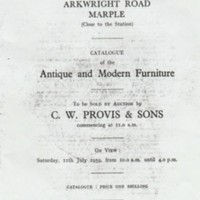 Photocopy of Catalogue for Sale of Antique and Modern Furniture at "Somerville", Arkwright Road, Marple on Monday 13th July 1959. Includes order of sale and detailed list of items.
To be sold by order of the Executor of the lat Mrs J S Budenberg,… 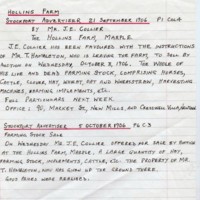 Two handwritten reports from Stockport Advertiser dated September/October 1906 in relation to Sale of Hollins Farm and stock by Mr T Hambleton who is leaving the Farm. 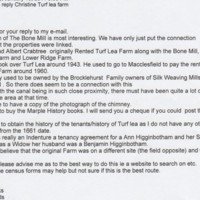 Email correspondence 2011 with research information from and to Christine Ferguson re her family connection with Turf Lea and Bone Mill. 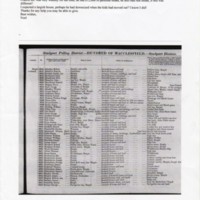 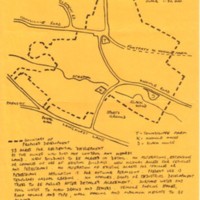 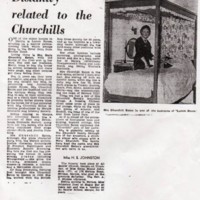 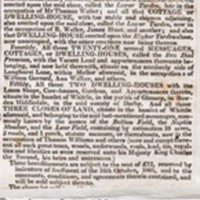 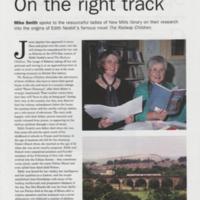 Extract from Living Edge Magazine, April 2000 with article on research carried out by New Mills Library on the E Nesbit's connection to Three Chimneys House in New Mills. 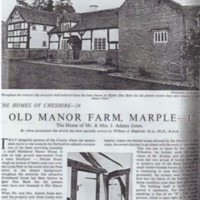 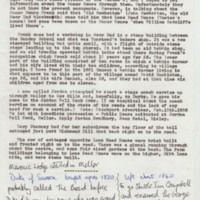 Carbon copy of typed Notes from a talk with Frank Yeates of Lane Head House on 12th October 1979 giving oral history of "Manor House" the premises and surroundings with extra handwritten notes . 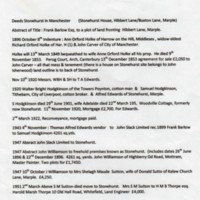 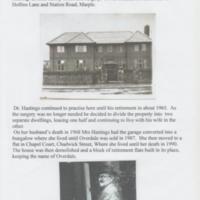 Photograph and details of Overdale House and Surgery that belonged to Dr Alexander Gordon Hastings, built in the late 1930's for his family and Surgery on the corner of Hollins Lane and Station Road.
Newspaper advert advertising sale of flats… 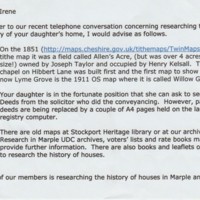 Correspondence with Irene Stiles re Lyme Grove her daughters home its history and location.
Photograph shows horse and carriage for the carnival at corner of Lyme Grove taken from Marple Website Virtual Tour. 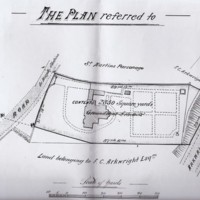 Correspondence with Howard Bernstein in relation to the history and residents of "Ellerslie"
1. Abstract of Title of William Livesey dated 1904. with plan.
2. Census records for property 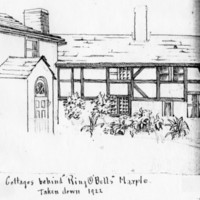 Photocopy of sketch showing the cottages behind Ring O' Bells, Marple, Taken down 1922.

Newspaper cutting relating to Property in Marple area from 1968 to 2002. 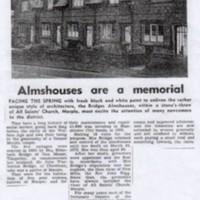 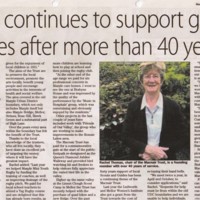 Research material and photographs on the MacNair family and the Trust set up by them.
1. BMD and Census Records of McNair Family
2. Two newspaper articles : a. Photograph and explanation showing Mrs MacNair the donor of Marple Baths being… Photocopy of black and white wedding photograph outside Brentwood House in 1946 of Bill Barrett and Ada Lee, who had family connections to Marple Swimming baths and Brentwood handwritten names of principal attendees around photograph.
Donated by…

Report : Recuperation, Rehabilitation and Residential Options : The Brentwood Centre for Mother and Children 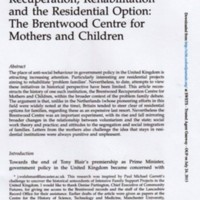 Report downloaded from the Oxford Journal Website, John Welshman of Lancaster University report entitled : Recuperation, Rehabilitation and Residential Option : The Brentwood Centre for Mothers and Children 2008. History of Brentwood and how the…
View all 49 items